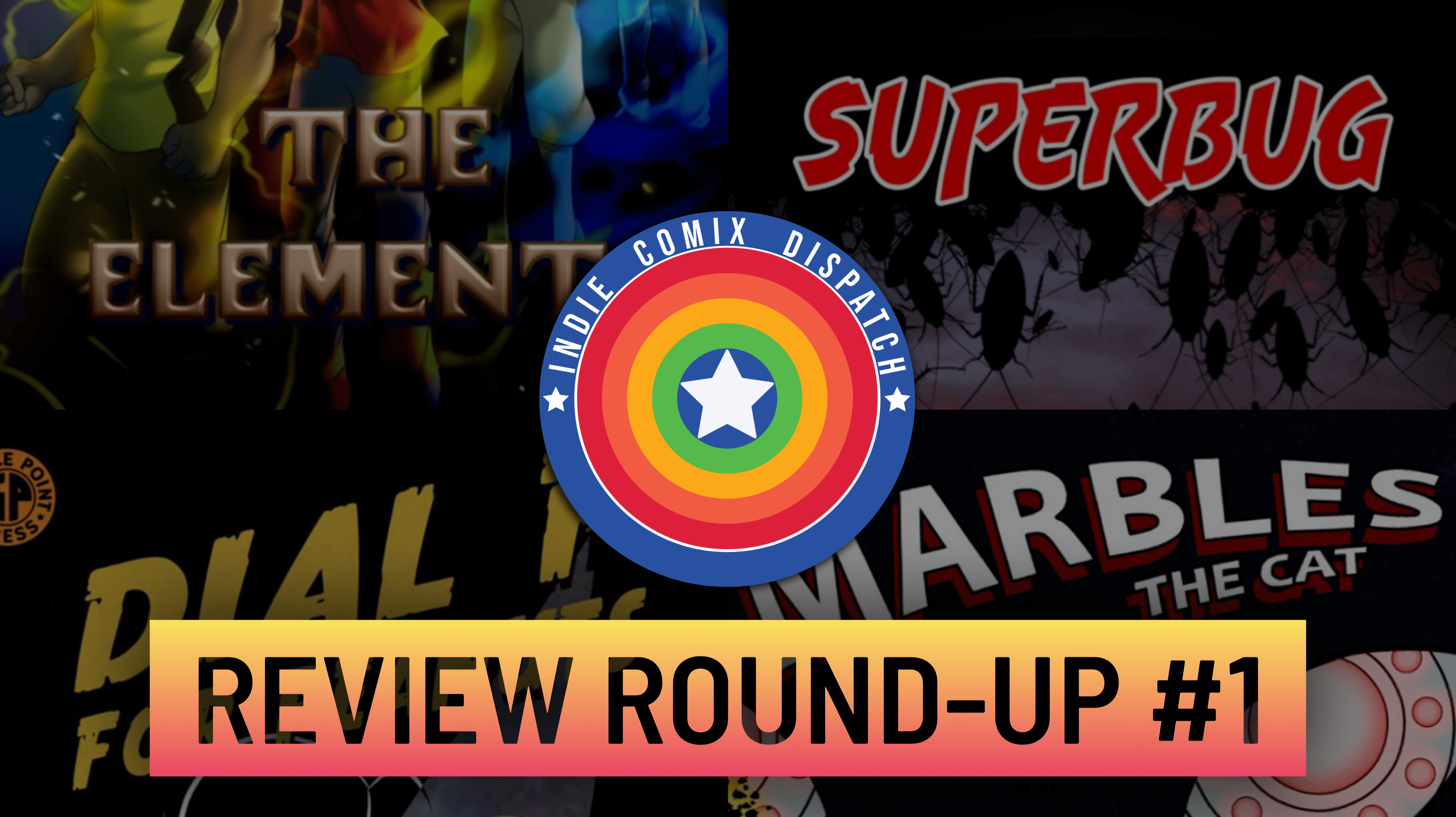 Welcome to the first Dispatch Review Round-up! What is the Round-up? We get so many books to review at The Dispatch, The Round-up is a way of moving through some of those books that we may not be ready, for one reason or another, to give a star rating to yet. Preview issues, quirky stories, or stories for which the reviewer may not be the target audience will be featured in the Round-up! They are books you should definitely still check-out if the description sings to you, and with future volumes they may appear again for a full review.

Four boys found as babies and raised in an orphanage. Suddenly their life changes when they receive the powers of fire, water , wind, and lightning and discover that not only do they have to protect earth but what’s left of the universe.

The Elements #0 from E4 Comics is a preview issue that actually takes place after the events of the coming first issues of the series. This concept is unique, but does lead to some confusion and unknowns while reading. The Elements shows promise as a series, but I’m reserving my full judgement until future issues are released. One thing is for certain, creator Jerry Chatelain has a passion for this project and an equally passionate fanbase.

“Superbug” is a story that shines a much needed modern light to Franz Kafka’s quirky roach story, The Metamorphosis. Like the infamous book, the premise is similar; only this Gregory is a 21st century teenage boy living in a privileged suburban household with his over-optimistic father, obsessive-compulsive step-mother, and spoiled little half-sister. The family dynamics present us with conflict, teenage angst, irony and humor that comes from everyday, relatable situations.

I need to add a disclaimer, I work in an industry that deals with child neglect and abuse, and there is a fair amount of that in Superbug, so this story wasn’t really for me. That being said, I can see the need for a modern update of Kafka’s The Metamorphosis. Superbug is a unique modern update that does show us very little has changed in the human condition in the last 100+ years. The art in Superbug is computer generated and does border on the uncanny valley, but you get used to it and it does convey the story well. The script for Volume 1 has won a bunch of awards, and if the story hadn’t hit so close to home, I think I would have enjoyed it much more! Even though the story triggered me a bit, I’d love to see more and see where the story goes with Volume 2.

Get a copy of the story at https://superbugboy.com/

”Dial P for Peanuts” takes the Peanuts Gang, as adults, and drops them in an Agatha Christie-esque murder house where they are bumped off, one by one. The book is an homage to both Schulz and Christie, but also a commentary on us, a society that has paralleled the Gang and become… wishy washy. Written by myself and Michael Kary, based off of our stage play, and illustrated by Kurt Belcher, “Dial P for Peanuts” is a darkly comic… comic. It is full color and 80 pages in total length.

Dial P for Peanuts by David Hayes is the grown-up, dysfunctional, murderous Peanut party no one asked for. Yet, sometimes you don’t know what to ask for, and then someone surprised you. Dial P is that book. If you like adding a dark twist to your childhood memories, this is the book for you! The description sums it up perfectly, Agatha Christie meets Charles Schulz and is drawn in Schultz’s signature style. Twisted, dark, and weird, Dial P for Peanuts will surely ruin the reprints of Peanuts in the Sunday morning paper for you!

Comic book creator and writer Matthew Myers proudly presents his newest project, Marbles the Cat! This unique science fiction adventure follows a rescue cat in 2089 that uses his evolved super powers to battle robots at the dawn of an alien invasion.

The futuristic setting and retro look was captured by talented artists Scott and Gemma Macniven, along with colorist Chloe Milton.

What if your cat was secretly an alien-fighting cyborg? Well, that’s the question Marbles explores. Marbles is a cute tale of a rescue cat protecting his humans from robot alien invaders. We’re not given much backstory. Why is Marbles a cyborg cat with laser eyes? Why are tiny alien robots invading earth? Why does Marbles have a grudge against these aliens? Nevertheless, Marbles is a fun story, especially for cat lovers who like to imagine the secret lives of their feline friends. Issue 1 has fantastic art that helps the story standout! If you’re a fan of cat, sci-fi, or cat-sci-fi check our Marbles The Cat!