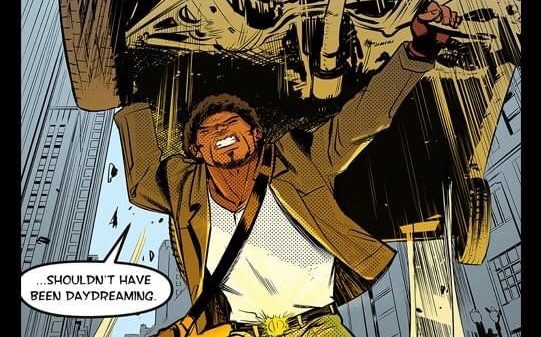 Meshach (Myth) Smith is a 200-year-old supernatural adventurer. Due to the circumstances of his birth, he is connected to the Next Door, an extra-dimensional realm that is home to magic. Myth uses his in-born magical aptitude to wield from the various mythologies of the world, and to maintain the crucial balance between “the real world” and the world of magic.

Myth Smith and MythWorlde Media are the creation of Gerald Boney. Gerald says of himself, and his origin as a comic book creator:

I’m from Fayetteville, North Carolina. The youngest of three kids, my older brother who I shared a room with growing up was into comics. I remember looking at the pictures before I was able to read lol. One of my dad’s rules was no tv during the school week, so my siblings and I were big readers. So I’ve been reading comics since I learned to read, and myself and a couple of my childhood friends used to make up superheroes and act out their adventures. I grew up loving sci-fi, fantasy, cartoons…typical “geek” stuff. I also used to draw, so I would draw comics and pin-ups of the characters all the time on typing paper. I was decent, not great as an “artist”, but didn’t stick with it. However, my interest in writing and creating never faded. I just always had an active imagination.

On creating Myth Boney says, “I’ve created a billion or so characters over the years, lol. Myth originally wasn’t the “star” of his own book, but a supporting character in one of the superhero groups I made up a long time ago. My taste has changed over the years and writing the typical superhero team dynamic lost much of its appeal. Add that with the interest in mythology that I’ve had since childhood and Myth kind of just grew to prominence. He was something different than what I was seeing out there on the shelves. There were not a lot of black magical characters that I was aware of at that time.”

Myth Smith currently has 2 issues (0 & 1) and is the star of the MythWorlde preview issue also. Issue two should be out before the end of 2020 (finger’s crossed).

Myth is a fantastic and funny read. I genuinely enjoyed reading this book and was disappointed when I got to the end. Boney’s writing style is concise and full of wit. Myth is inspired by Indiana Jones, Hellboy, Shaft, Jonny Quest, and more, and these inspirations really shine through in the stories and give a sense of nostalgia to Myth. But, just because Myth Smith feels nostalgic doesn’t mean it’s old, dated, or been done before. In Myth, Boney gives us a funny, strong black male lead to a supernatural comic book, something the genre has been missing.

As for what else he’s working on, Boney says, “I also have another book called Double Dose. Each issue features a different character and has two complete stories with that character with art by two different illustrators. This book is a way for me to publish stories about some of those billion or so characters I mentioned, but without committing to entire series or graphic novels with them. They all will show up somewhere else down the line, whether in their own book or as “guest stars”. Myth Smith stars in issue one, which is available now! Issue two stars a character I’m pretty excited about, but I won’t say much more until her issue is closer to completion. People can get a sneak peek at the covers for future Double Dose issues when they subscribe to my mailing list. You get a free sampler comic which features those covers as well as some Myth Smith comic pages that aren’t available anywhere else!”

Myth Smith is a fantastic read, and with digital books now available on the MythWorlde website, there is no reason you shouldn’t immediately go grab a copy of the witty supernatural adventure starring Myth Smith!

MythWorlde Media: home to whatever maniacal musings cross G. Boney’s mind. From the supernatural adventures of MYTH SMITH, to the superheroic tales of THE UNDERGROUND, the pulp style tales of GHOST O’JOHN…plus any and everything in between!

Visit MytheWorlde and grab your copies of Myth Smith: https://www.mythworldemedia.com/