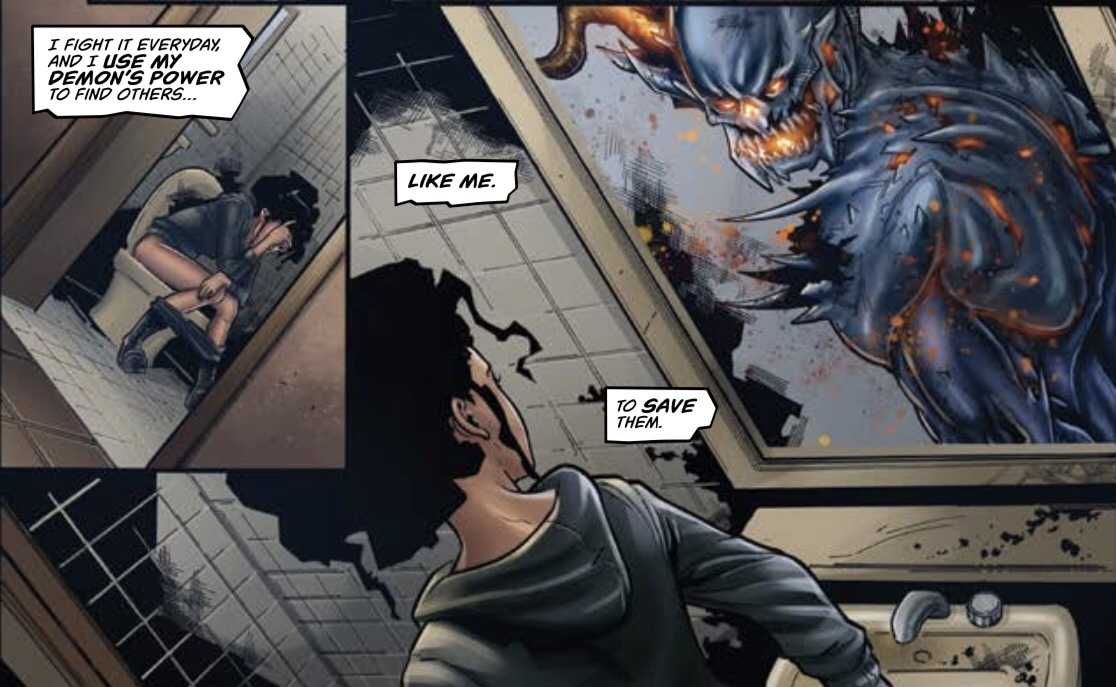 Devil’s Dominion is a new on-going series from Blackbox Comics, brought to you by creator Brian Hawkins and artist Raffaele Forte. Pre Orders have already begun via Preview World, with Issue 1 set to be in stores in December.

The series revolves around Devlynn St. Paul, who sold her soul to the Devil to stop the horror being done to her by her brother.  However, Devlynn reneged on the deal and now uses her demonic powers to hunt others who are demon-possessed and have lost control of their lives.

Issue 1 starts in a small, unnamed town in the Midwest with a woman being pursued by an attacker. The individual behind the attack remains hidden behind a cloud of dark smoke. At the same time, Devlynn checks-in to a motel room to use her Demon’s power to try and discover who, or what is terrorizing the town. Devlynn, through her narration of the story, reveals that she had sold her soul to the devil, fought for her soul, escaped the devil, and now travels the world using her powers to fight the very source that gave her those powers.

Issue 1, part of a 5-issue story arc, is fast-paced and full of action. Hawkins does a wonderful job of balancing the action with bits of history of Devlynn’s life. Hawkins doesn’t drag out the story. Devlynn’s first conflict in the town is resolved by the end of the issue, but an even more menacing foe appears in the final panels, leaving the reader more than ready for issue 2. Hawkins’ writing delivers us a strong, badass black female lead that the supernatural genre of comics has been lacking. Devlynn could surely go toe-to-toe with Dr. Strange, John Constantine, or Hellboy and hold her own.

Forte’s art is spectacular. His portrayal of Devlynn, a yet unnamed detective, and the various demons in this issue are wonderful and help carry the story even further.

Devil’s Dominion is well worth ordering and checking out the first five-issue story arc. Fans of supernatural comics will not be disappointed in Lewis and Forte make a strong case as being the new Mignola and Byrne of the supernatural genre.

Aside from being an English teacher for over sixteen years, Brian Hawkins is an editor for Mad Cave Studios and author for North Star Editions Publishing. When Brian is not freelancing writing or editing, he’s working on his own creator-owned and self-publishing properties, both comics and novels. Devil’s Dominion is Brian Hawkins’ first book/series with Blackbox Comics.

BlackBox Comics is an independent publisher based in New York, inspired by those who share an appreciation of comic writing and art, the comic industry, as well as avid readers all over the world who love great characters and great stories.