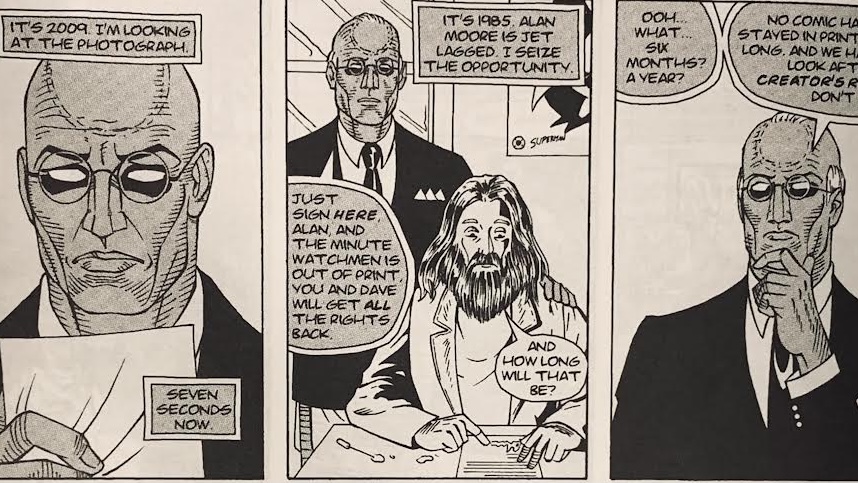 Book Description: “Watchmensch” is a satire of the classic story, “The Watchmen”, by Alan Moore. In this story we see a cautionary tale of what can happen to a creator’s intellectual property if they’re not careful with the way their contract is written.

“Watchmensch” did make it onto my radar until about a year ago. I saw it in an online auction for a reasonable price and pulled the trigger. I was expecting something that would give me a few laughs. It did until I realized that while some creative liberties may have been taken,it’s quite likely that parts of this story are true.

Maybe it’s the naivety of not being a creator. Maybe it’s because I like to think people are better than this. Whatever it is, I was disappointed to see how a star creator essentially had his property stolen from him. He got paid and is continuing to do so… for pennies on the dollar. Adding insult to injury, this creator is referred to as bitter or crazy for their take on the comic book industry.

The fact that Johnston and company were able to pare a 12 issue down one and still hit most of the high notes from the original source material was impressive. There were a couple moments along the way that felt forced. It worked though.

This cover is a homage to one of the most iconic covers of the last forty years. Unlike many other homages, this one is actually relevant to the story.

The artwork on the interior pages is solid. It’s not as detailed as the original source material. It did not need to be. A handful of crystal clear panels were more than enough to convey the message of this story.

“Watchmensch” is something of a collector’s item. The most affordable copy I found on eBay goes for about $15 plus shipping. While this is a fascinating tale, as a geek on a budget I can’t recommend paying that much. If you come across this book in the back issues or a buck box, congratulations. You’ve struck gold.