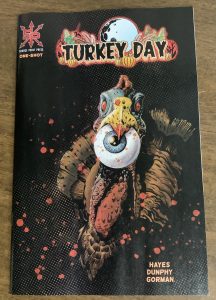 Book Description: Welcome to the small town of Pilgrim Point, Illinois. Located about an hour outside of Chicago it’s everything you’d envision a small to be. It has a pharmacy, grocery store, library, theater, and the like. Intersections are practically unnecessary.

Every year the town puts on a play called “Plymouth Rock” in honor of the first Thanksgiving. With the exception of emergency services, almost everyone in town either has a role in the play or is part of the audience.

During the play, an alien spacecraft crashes at a turkey farm on the outskirts of town. When we see them for the first time we learn that the aliens are only about five inches tall and resemble worms with appendages for arms.

A turkey thinks one is a worm and pecks it. The aliens see this as an act of aggression and respond with violence. Before you can say “Butterball” the aliens have assimilated the turkeys. They see a flyer for “Plymouth Rock”.

After reading the flyer the aliens come to the conclusion that they can strike and take the town in one fell swoop. This begins the march of the turkeys.

At the play, the high school history teacher that helped write the script is fed up with how many liberties have been taken with his work. He walks out with his wife. Outside of the theater, they see the turkeys attack a teenager walking through town.

They go inside to alert the townsfolk. No one takes the teacher seriously. Then the turkeys storm in, easily capturing the befuddled humans. The teacher finds a way to make contact with the police.

The police arrive loaded for bear, but they don’t have the wherewithal to realize how dangerous the situation truly is. They give up the opportunity to strike first. A bloodbath ensues that only one side can emerge victorious from, creating a new holiday for all of Earth’s inhabitants to enjoy.

With it being the week of Thanksgiving, I had to find something related to the holiday to write about. The problem I was facing was the fact that there aren’t a lot of Thanksgiving Day books out there. Then I saw this one on the shelf at my local comic book store. Problem solved!

In 1997 the movie “Men in Black” came out. Tommy Lee Jones’s character said, “A person is smart. People are dumb, panicky, dangerous animals…” Time and again we see how humanity’s stupidity puts our species in a very bad position. It comes to light again in “Turkey Day”.

The one individual that identifies the problem for what it is and has a solution is so casually dismissed that it reminds me of the beer commercial when the college kids are listing all of the stupid things they could do in an effort to “save” themselves. The guy holding the chainsaw just rolls his eyes and shakes his head.

In this book, the aliens are clearly the guy with the chainsaw. It makes me wonder if we’ve been contacted by an extraterrestrial and upon seeing our intelligence as a whole decided that the best move would be to move along.

While we don’t get a feel for many of the characters, we get a great feeling of Pilgrim Point itself. Somewhere along the way most of us have been in a town like that.

I can’t say enough about this cover! Depending on who you are it’s either gruesome or cool. Either way, it’s very striking. This is a cover that forces you to be aware of its presence.

The interior artwork is not quite as detailed. Given that this title is a touch gorier than its contemporaries that’s probably a good thing. I liked the panel when the aliens were first scanning the turkeys and when the turkeys stormed the theater.

The story reminds me of “Spaced Invaders”. The major difference being the aliens are far more intelligent and have the ability to assimilate/control other beings. In a couple of spots it’s a little predictable, but it’s a great ride.

“Turkey Day” is a one-shot. The geek on a budget in me loves that. Financially, getting an entire story in one book is so much better than paying a monthly tithe for an ongoing series. The book runs about a dollar more than most of the comics on the shelf. It’s worth it! I truly hope that the creative team will get the band back together for a Christmas Special as well!!