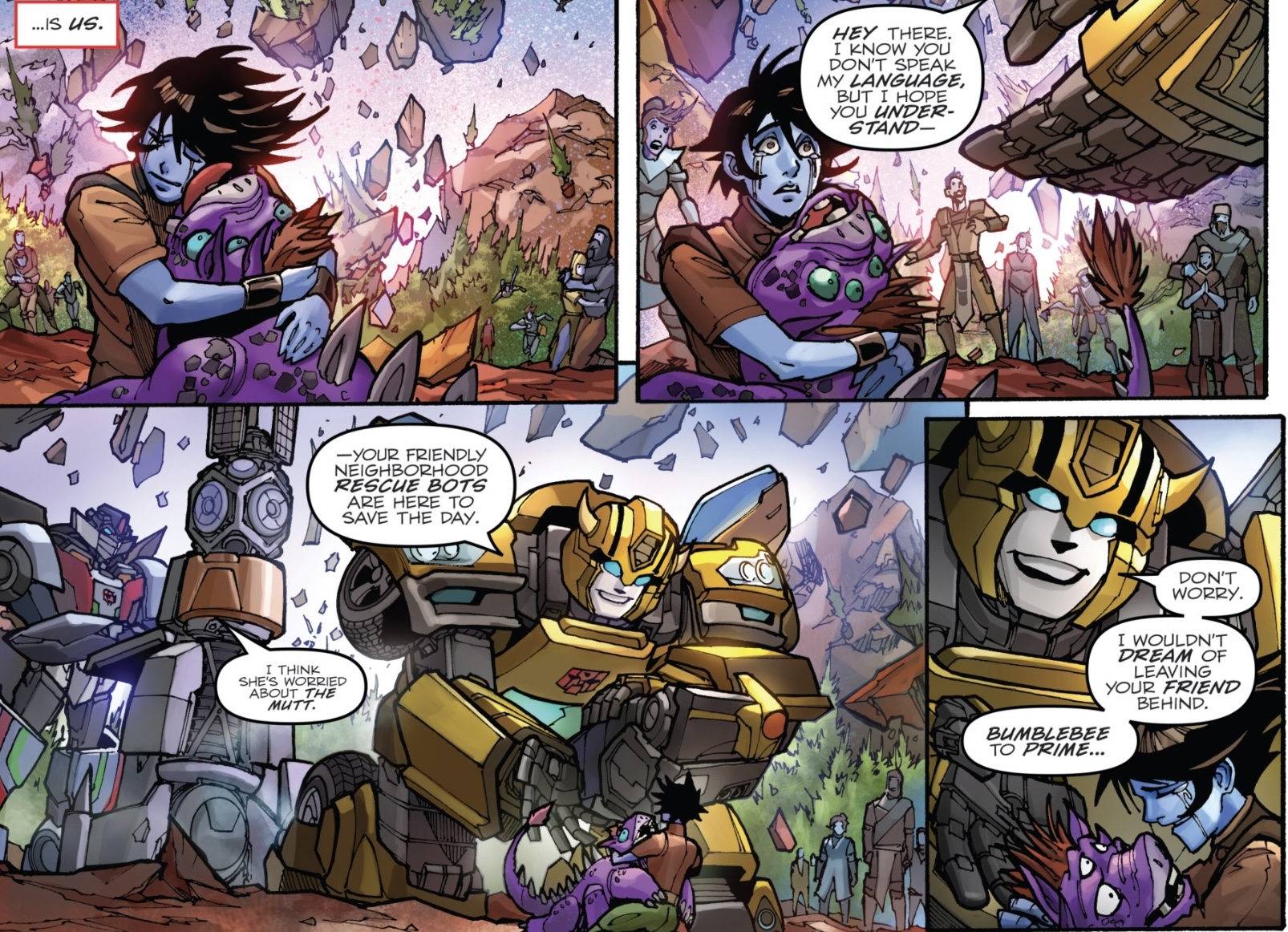 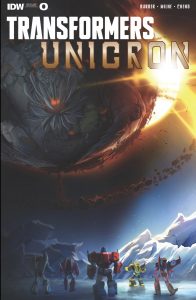 Book Description: The book's first shot is that of a child chasing what appears to be a pet, as the text talks about the end. But the serene shot is disturbed by destruction as things begin to fly from the ground to the sky. The next page is that of some sort of creature hovering over in the sky and the objects and creatures from the previous page being sucked up into the air towards this ominous creature with a large gaping mouth. Followed by a shot introducing the Autobots and a humanoid named Rom, talking about what they see. We then go further into the story as the Autobots and Rom talk about the creature hovering over the planet, showing a better view of the creature in the process. All the while discussing whether or not to attack the creature which up to this point has been called an anomaly, or to save the lives of the planet. While the debate is happening we get a little bit of backstory on Rom and how is one of the greatest organic warriors of the cosmos, followed by an introduction into other compatriots of Roma. Roma meets with the other group, which is revealed to be the Solstar Knights. As they fly towards the creature we see more cybertronians, lying lifeless on creatures' surfaces, much to the fears of the BumbleBee and Optimus Prime. Bumble Bee reveals one is named Cliffjumper and that they were from the planet Velocitron but disappeared. After a little commenting back and forth the Solstar Knights head towards they gaping center of the creature where all the debris is flying into, only to loose communication with Optimus where we see all cybertronians, Soundwave, who is running communications in the background. Ultimately the Solstar Knights are attacked and it appears some of them perish, with a blast heading towards the planet surface. While the Cybrtronians come up with a plan to get the residents of the planet off we see the planet continue to be sucked up towards the creature. The cybertronians land on the planet and begin to place various beacons across the surface in hopes to transport as many people as possible onto their space vessel, the Ark. As they try to save the populace they discover the transport process which they call the space bridge is being blocked, while following the signal they discover that Rom has survived the encounter with the creature in space that is devouring the planet. Only to discover the reason for the space bridge block is a cybertronian titan and is the harbinger of Primes! The discovery of the titan, reveals the planet they are on is called Elonia and is one of the lost 13 colonies. During the process of discovery it is revealed that the titan is the one blocking the signal that creates the space bridge. As they debate what to do they realize the titan is still active, and the Autobot known as Arcee attacks the titan to stop the signal blocking the relief efforts. Once the titan is essentially killed, Wheeljack is able to activate the space bridge and save as much as the populace as they can, and while Wheeljack is activating the space bridge, he ultimately sacrifices to save the population of Elonia. As the creature devours the planet, it is revealed that the space bridge worked but maybe not as effectively as they wanted, it is also revealed that two of Roms Knight's companions survived. As the creature finishes devouring the planet it disappears, and the Autobots only manage to save two thirds of the populace of the planet even with the loss of Wheeljack. In the aftermath the rescue team led by Optimus Prime contacts the leader of the Cybertronians, Windblade. During the discussion it is revealed that the creature is possibly named Unicron and that there may be no stopping it.

Transformers has been a staple since the mid 80’s, bringing many childhood memories.  The one thing that has been consistent is that Unicron has been one of the big baddies in the history of Transformers.

Optimus Prime has been one of the main leaders of the Autobots since conception of the transformers, during this story we also discover that Soundwave, a Decepticon is working with the Autobots as communication officer,  this caters to the dire need of the Cybertonians when dealing with Unicron, which is pleasant to see.  It shows that the possibility of the Cybertronians actually becoming extinct is a real thing.  Which makes the story a wonderful example of how great the writing is in this book.  The investment that the story compels the reader to make, draws the reader in and makes them want more.  I definitely have been hooked myself and look forward to reading more of this story!

The cover art as well as the interior art is outstanding and shows just how much of a baddie that Unicron really is, the cybertronians as well as the Elonians show their emotions perfectly as they deal with the calamity of having the planet that the cybertronians are trying to save.  The way the artwork shows the mild success and sudden realization of the loss of Wheeljack makes the reader feel what the cybertronians feel.  That in itself is a great thing as it brings immersion and feeling to the forefront as the reader invests into the story.