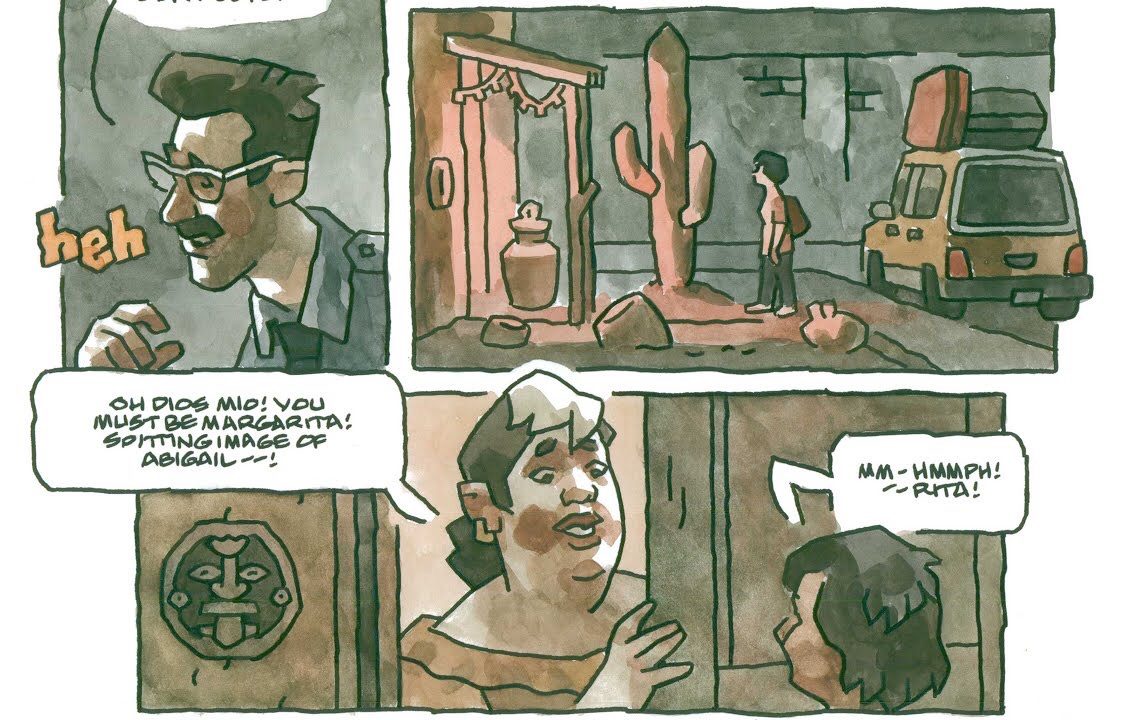 The Curse of El Cucuy by Craig Phillips and Turner Mark-Jacobs is a young adult/horror graphic novel based loosely on the myth of El Cucuy—the cross-cultural Latinx “Boogeyman”–set in modern times.

The story begins shortly after the death of Rita Flores’ mother. Rita and her father move to her mother’s hometown in the Arizona desert, to live with an eccentric elderly aunt. Rita quickly makes new friends and learns of the recent disappearance of a teenage boy. She also discovers a dark family secret. The town, Rita finds, is hiding a dark, open secret – El Cucuy is real, and he’s awoken from some dark sleep and is hungry.

Issue 1 is a quick, fun read with plenty of foreshadowing and tension. As much as you know about Rita, her family, and the town, there is even more that is not revealed in the first issue. Phillips’ dialogue is superb at telling the story, with cultural impact, and guiding us down the path that he, as a storyteller, wants us on. Phillips worked with a Latinx cultural expert, Patricia Santos Marcantonio, to help guide and shape the story in a way that respected Latinx culture and folklore.

Of this project, Phillips says, “One of the things that I know as a white man in our culture is that I frankly occupy a place of privilege. Part of this privilege is being able to generate funds for a project like this and tell stories for a living. One of my biggest goals with this project is to elevate Latino voices and to be able to pay Latino artists and collaborators to work on future volumes in the series.”

Mark-Jacobs’ art adds to the story perfectly. His watercolor and ink art, inspired by the work of Mark Mignola, guides Phillips’ narrative seamlessly and somehow adds a layer of rustic authenticity to the story. His pallet of colors evokes the sense that you’re truly in a small desert town in Arizona.

The Curse of El Cucuy has the makings of a great comic book horror series and the team behind El Cucuy is bringing light to a legend that, at least I, had never heard of before. This book is definitely worth a read and I am eagerly awaiting the announcement of issue 2.

You can get a print copy of issue 1 at http://craigary.weebly.com/store/p2/curse-of-el-cucuy-vol1-print.html

The Curse of El Cucuy is a young adult/horror comic based loosely on the myth (or is it?) of Cucuy-the cross-cultural Latin Boogeyman–set in a border town in the US southwest, and was adapted from an award-winning spec screenplay. Created by screenwriter Craig Phillips, who is also a cartoonist, film blogger, and short story writer (with an MFA in creative writing), with the talents of New Mexico-based artist Turner Mark-Jacobs who is influenced by the work of Mike Mignola, the intent of the series is to elevate and center Latino stories and create cross-cultural understanding in these dark times. Future volumes of the series will add other writers and artists, and there will be a Spanish language version of the comic later in 2020. Spain-based cover artist Nache Ramos did the cover art. We aim to release future volumes of the series in subsequent years.

Review: Beyond The End Of My Street
Spotlight: In The Shade Publications
Sponsor