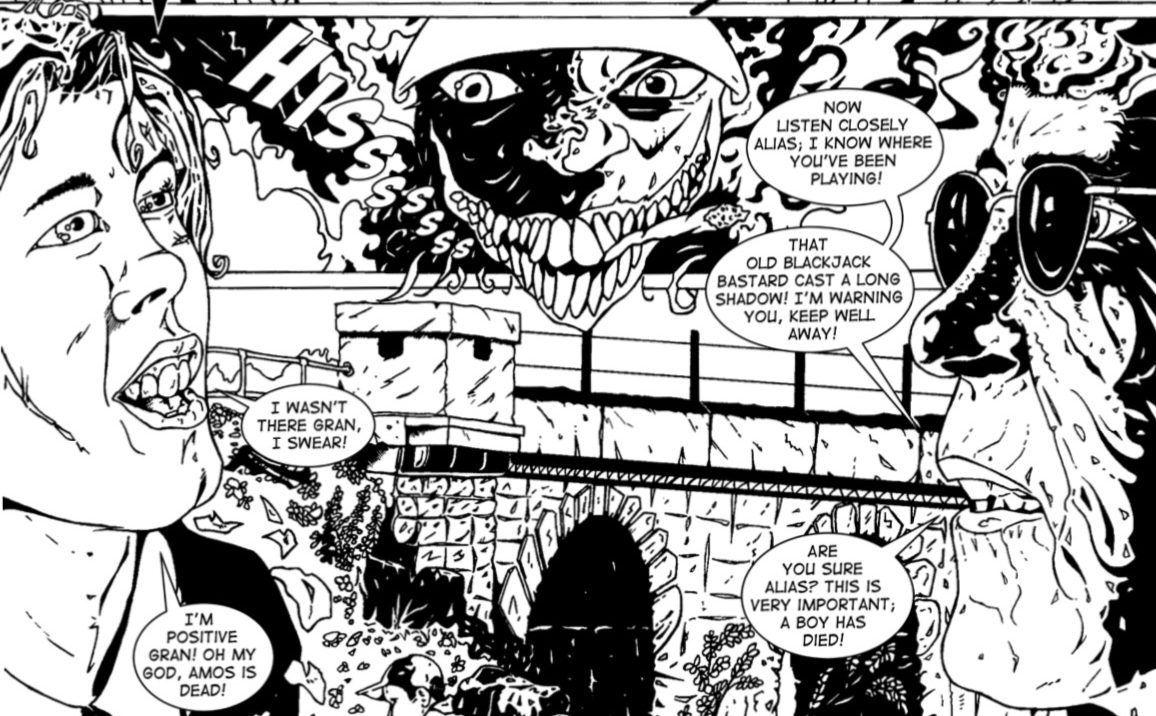 “Beyond The End Of My Street is the state of a child’s unconscious mind, where a war between the realms of man and faith rages. Alias Rhymes suffers from post-traumatic stress disorder and finds himself flung far into the depths of his own imagination, where only by realizing the strength within himself, can he save his friend and those that he loves from the devious plans of the Wrongun’s.”

With that introduction, Lee Cope of Corona Comics (the sun, not the pandemic) dives into Beyond The End of My Street (BTEOMS). BTEOMS is a semi-autobiographical, supernatural/horror comic book set in England and revolves around the childhood of two ten-year-old boys known as Alias Rhymes and Amos.

Amos lives by the river and Alias lives in a council estate. Both of their fathers are abusive and the boys long for an escape. Their friendship is interrupted by Amos’s unexpected demise through a tragic railroad accident, and then… shit get really weird.

BEOMS issue 1 leaves you guessing what is real and what is the fog of a troubled 10-year-old’s mind. The story is not fluid, but I think that’s part of the set-up. You are living this story through Alias’s view. It’s his story and you are there to bear witness. What starts as a coming-of-age story between two boys during the summer, quickly becomes something much, much darker. What perhaps makes it even more alarming is that some of the events and locations in BTEOMS are based on Cope’s own life.

Issue 1 is an interesting, if not jilting read. I’m anxious to see what the rest of the issues bring, currently issues 1-5 are available. The story at the end of issue 1 seems scattered, and it will be interesting to see how, or if, Cope brings that together. I was feeling a bit incomplete at the end of issue 1, I wanted more fleshed out for me. But, all the pieces are set for BTEOMS to be a really great horror series, whether Cope is successful or not will rely on issue 2, which I have unfortunately not yet read.

I think BTEOMS is worth taking the chance on and grabbing more issues to see where the story of Alias Rhymes heads. I have found a new (or newer) love in supernatural and horror comics, and BEOMS does surely scratch that itch. As I gear up for my October / Halloween reading, I’ll be sure to add more issues of BTEOMS to my list of books, and I think you should too.

Beyond The End Of My Street is a ten-issue comic book series written & illustrated by myself. It’s loosely based on real events that have occurred in my lifetime and revolves around a boy named Alias Rhymes and his struggle with mental health issues.