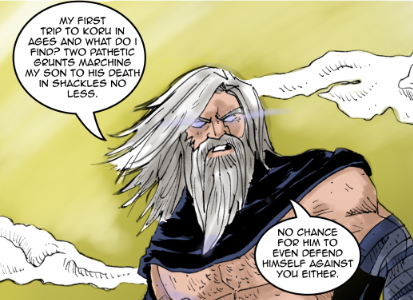 Brandon Gorski, Cory Lahue, and Antanas Meilus founded In The Shade Publications in 2018 to bring their comic creations to life. Currently In The Shade has several titles out, more than most 2-year-old comic start-ups, with Gorski as the illustrator on all the issues. Brandon recently sent me Jury #1 and their 2019 Sampler issue with samples of the other three titles.

Currently In The Shade offers:

The sequel to 2016’s Match: City On Fire picks up moments where Match left off. Wes Ellis has been reborn from the flame. After a year of being on the outs and narrowly escaping death, he begins to pick up the pieces. This is what happens next.

Ilona’s journey to becoming Lys greatest Paladin has only just begun. Will she be ready to face the challenges on the road ahead?

Fenrir & The Escape From The Deep:

Fenrir will stop at nothing to claw his way out of The Deep, even if that means bringing it home with him.

The Expeditions of Atlas Clarke:

Atlas, a malfunctioning mechanical man, wanders the mysterious planet of Kishar seeking out who created him and why.

In The Shade’s titles currently run fill the Crime Noir, Fantasy, and Sci-fi genres. Gorski’s art in all the titles is solid and consistent, it brings unity between the titles that otherwise doesn’t exist.

The stories in all four titles are actually quite good. Gorski’s Jury comes through as a solid redemption story, with an inner dialogue from the protagonist that propels the story.

The other three issues I only read the samples of, but of them Fenrir & The Escape From The Deep was my favorite with the other two tied for second place. Meilus’ writing in Fenrir reminds me of the start of a great D&D campaign, there’s wit, fantasy, adventure, and a voyage through hell ahead! I’m looking forward to reading more from Fenrir.

I am intrigued by Legends of Lys and Atlas Clarke, but I’m not sure I read enough in the sampler to give an accurate review. The stories in each have a good start and feel solidly in their genres of fantasy and science fiction respectively.

I’m looking forward to seeing more in the future from In The Shade. Having Followed Gorski on Instagram, I watch him hone his craft with every illustration he posts. I imagine the art in each additional issue will only get better and better.

About In The Shade Publications:

In The Shade Publications is an independent label for creator-owned comics and graphic novels! Our titles currently include Legends of Lys, Fenrir and the Escape From The Deep, and The Expeditions of Atlas Clarke, Match: City On Fire, and Jury.

Our mission is to create deep lore-rich worlds for you to explore with colorful yet relatable characters by your side. Whether it’s traversing a high-fantasy hillside with a paladin, climbing your way out of the depths of the underworld, or globe-trotting for treasure across a sci-fi space opera, this is the opportunity for you to hit landfall at the origin of a new, ever-expanding universe!

Visit In The Shade and Order Books at – https://intheshadepublications.com/