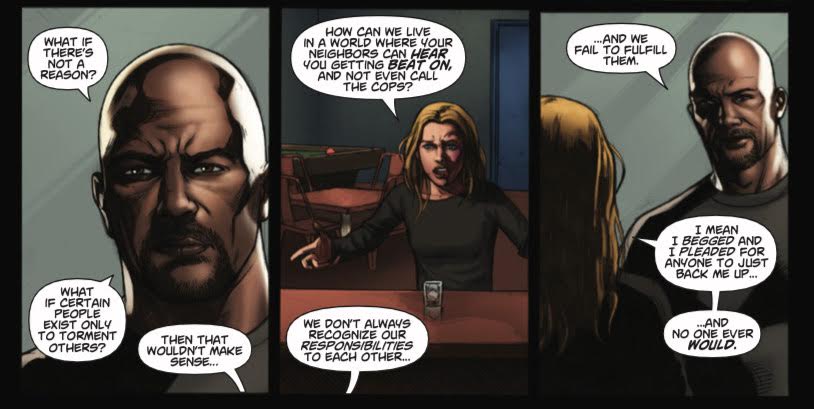 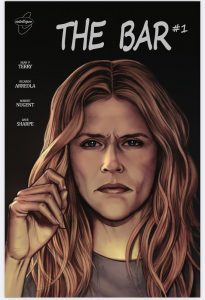 Book Description: The Bar #1 is set in an establishment called “The Bar”. The bartender has heard many tales in his time behind three feet of mahogany. In this issue we learn the story of Lorena Davis. Lorena isn’t one of the regular patrons at The Bar. Sometimes a person just needs a drink though. At one point, Lorena’s life was spinning out of control. She was an addict. Her husband hung himself. That’s when she met Dan. Dan wasn’t Prince Charming; but he treated Lorena pretty well… at first. As time went on he became abusive. First verbally, then physically. The neighbors could hear the screaming. They never reported it. Why would they? Dan was friends with the local police officers so nothing ever came of it. What’s Lorena to do when she’s trapped in a no win situation?

We don’t get much in the way of being told exactly where “The Bar” takes place. Given the nature of the story, I think it’s brilliant. This story is happening everywhere in America in all walks of life. I commend Mr. Terry for bringing this issue to the forefront.

According to statistics one in three people are involved in domestic violence at some point in their lives. Be it as the victim or perpetrator. It’s the problem that nobody wants to talk about.

When abusive relationships are talked about the same question always arises. “Why don’t they just leave the situation?” As simple as it sounds, it’s not that simple. The abusers put their victims in an emotional and/or financial position where they feel that leaving isn’t an option.

They are forced to stay and endure it. Look at Kim Kardashian. If one of the wealthiest and most influential women in the world is having this much trouble getting away from an ex, how are other women supposed to just “walk away”?

If you find yourself in a situation like this there are resources available. You can contact the National Domestic Violence Hotline at http://www.thehotline.org or call (800) 799- SAFE(7233).

This cover has very detailed lines followed up with tremendous coloring. I found the portrait style of artwork to be a unique choice. It works well by putting a face to domestic violence, even if it’s fictional.

The artwork on the interior pages sucks the reader in almost immediately and leaves one feeling like they’re at the pub down the street. It meshes perfectly with the story.

As a geek on a budget I believe that “The Bar” raises the bar on what people should expect from a comic book. We get a very plausible story coupled with great artwork. This will be a must read when the Kickstarter campaign begins!

You can get your copy of “The Bar” at: https://www.kickstarter.com/projects/intelligencomics/the-bar-1-2