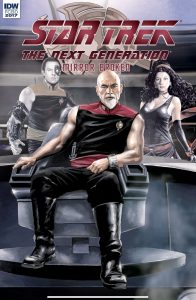 Book Description: This story takes place in the mirror universe, centering around one Lieutenant Barclay, on the I.S.S. Stargazer. As the story begins Barclay gives a very quick rundown of the current state of the Terran Empire and its current state of affairs before being called to the bride by Captain Jean-Luc Picard. Barclay being part of engineering is just trying to make sure that the Stargazer is up to snuff, but still wants to promote himself up the chain, after an attack on Tasha Yar he gets just that…

The particular story is interesting, being that it’s the ground breaking issue.  The thing with the mirror universe is that it makes everyone in the federation the polar opposite of what it might be.  Therefore there is always room to explore, it is kind of Star Trek’s version of the great comic question, what if?  What would happen if this great utopian society decided that they just simply took what they wanted instead of helping others succeed.

Now anyone who is a fan of Star Trek knows this is not the first foray into this universe, in fact the brief history in this story brings up the events of what happened in the 1960’s television show.  So when I picked up this story, having watched the TNG series when it was new I was interested to see where it would lead.

So far from what I read I wasn’t disappointed, they took the character that in TNG was one that never really seemed to apply himself and made him the center of the story, and he did well.  Which in the mirror universe is a good thing.  This is definitely a story to follow for any Star Trek Mirror Universe fans.  The character development of Barclay will be an intriguing thing to watch.

The color of the cover and the interior artwork are brilliantly done.  While the prime universe is bright and pleasing to the eye, the mirror universe reflects the opposite as it should.  Dark, brooding and bold.  The appearance of the characters reflects the actors greatly and matches the show as it should.  Matching the story like it does adds to the overall feel of the story, making it something worth reading!