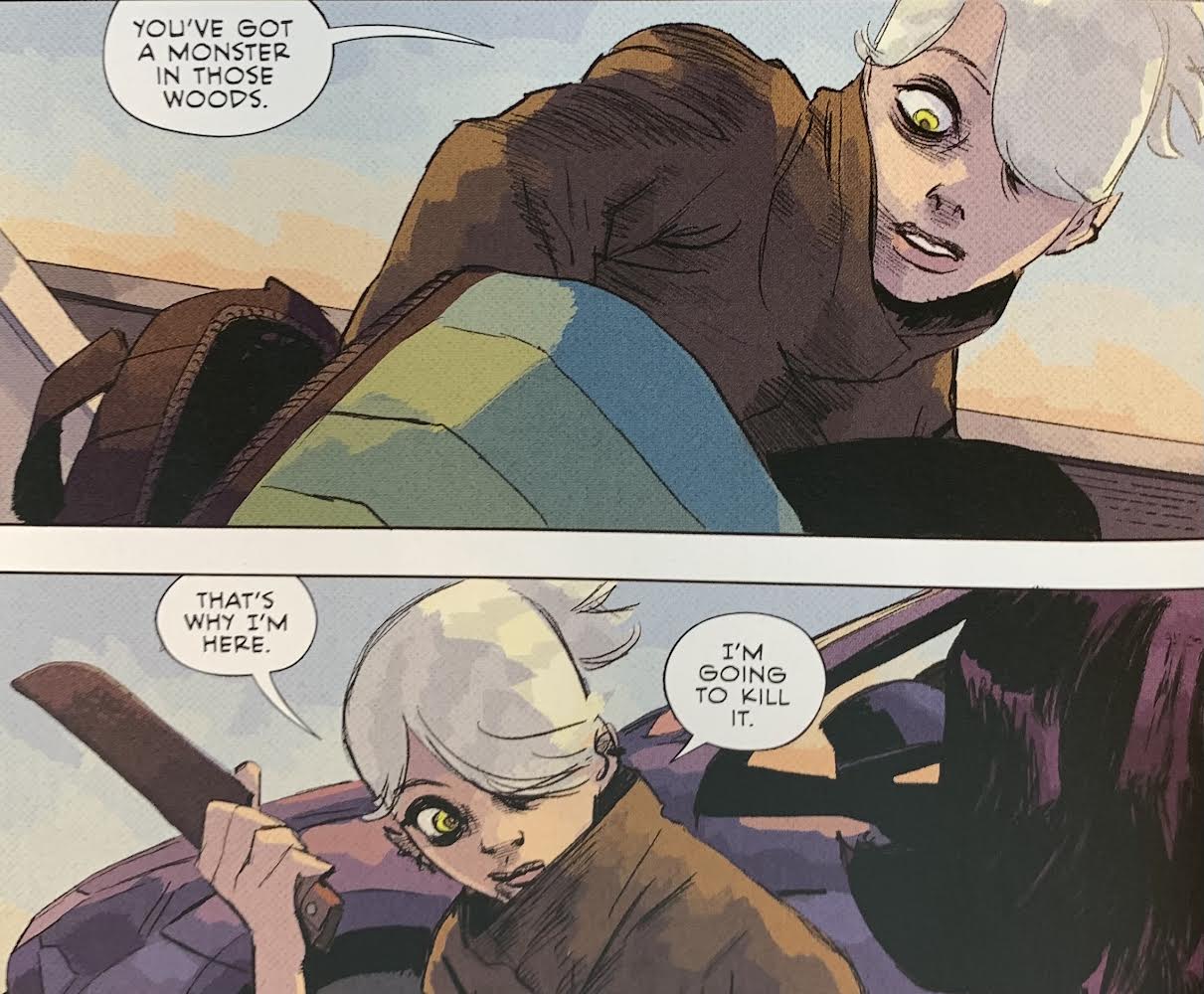 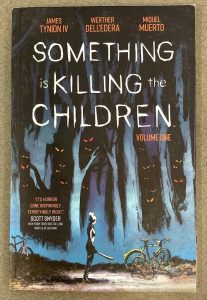 Book Title: Something Is Killing the Children, Volume 1

Book Description: In the small town of Archer’s Peak, Wisconsin children were disappearing. No leads. No witnesses. No signs of struggle. Local law enforcement had been ascribing to the theory that the disappearances are runaways. That changed when James and his friends were in the woods after playing truth or dare. By blind luck James fell down a trench. By the time he reached the top his three friends were dead or dying. James told the police he had no clue what ripped his friends to shreds. At this point police think there’s a rabid bear somewhere in the area. Two weeks later a woman named Erica Slaughter comes to town. She’s all business as she finds James and asks him to tell her the story the police DIDN’T get. James tells her he saw a monster attack them; but monsters aren’t real. That’s when we learn that monsters are, in fact, very real. As we age our ability to see them diminishes because we’re told that they don’t exist except in children’s nightmares. By the time we’re in our 20’s monsters are invisible to us. Erica plans to find and kill this monster. When she takes James to a restaurant to talk to him about where all the children disappeared from Tommy inserts himself into the conversation. He has a vested interest in learning what happened to the children. His sister Sophie is among those that are missing. Erica and Tommy don’t exactly get off on the right foot. He’s convinced she is somehow connected to the missing children. She knows Tommy has no idea how in over his head he is. They have an altercation in the restaurant that leads to Erica being arrested. At the station we see Erica get under the chief’s skin. He wants to be able to nail her for the crimes against the children; but he knows she has a viable alibi. She infuriated him even more by saying he’s going to be getting a phone call saying to let her go. The phone does ring; but it’s not the call we’re expecting. It’s a report that more children have been killed. Erica tells the chief this happened because she was locked up instead of doing what she came to do. Reluctantly the chief lets her go… but instructs his officers to tail her. Tommy sees her leaving the police station and is shocked. She and James go shopping for supplies. An ax, chainsaw, hedge clippers, and anything else that will dismember a monster goes into the cart. Erica and James then go to the lake, where the hunt truly begins. Tommy shows up to make things interesting when they find the monster’s lair. That’s when we learn just how serious the situation truly is.

“Something Is Killing the Children” has been on my radar for quite some time. It’s been in my reading queue for about a year. It was always one of those “when I can get to it” titles. My friend Fire bought and read her copy of the first volume in a time span of about two days. That compelled me to get caught up so we could compare notes.

“Something is Killing the Children” made it onto my radar when Netflix announced that they were producing a tv series based on the book. Now that I’ve read the first five issues I can see why they wanted to make a show from it.

This story is on par with “Stranger Things”, only without the sense of nostalgia. It has suspense, drama, and relatable characters. Erica’s no nonsense approach to things doesn’t make her well liked at times; but she gets the job done. She reminds me of my friend Kevin in that regard.

I can’t say enough about this cover. It’s everything you want for a horror story. It creates suspense and intrigue while not going into so much detail that the story is painted into a corner.

The artwork on the interior pages takes some getting used to. It isn’t as detailed as I would like for some panels. Much like Jason Shawn Alexander’s work on Killadelphia, it takes nothing away from the story. In fact there are times where it creates more suspense.

People gobbled up the individual issues when the television series was announced. Now you’re looking at paying collectors’ prices for these five issues. That can easily hit your wallet to the tune of over $750. Call me crazy, that’s a bit too steep of a price to read the story.

This is a must read story. As a geek on a budget I recommend going for the digital copies of the single issues or the TPB. In a worst case scenario it’ll set you back about $17.00. That way you can use the money you saved to buy other books!