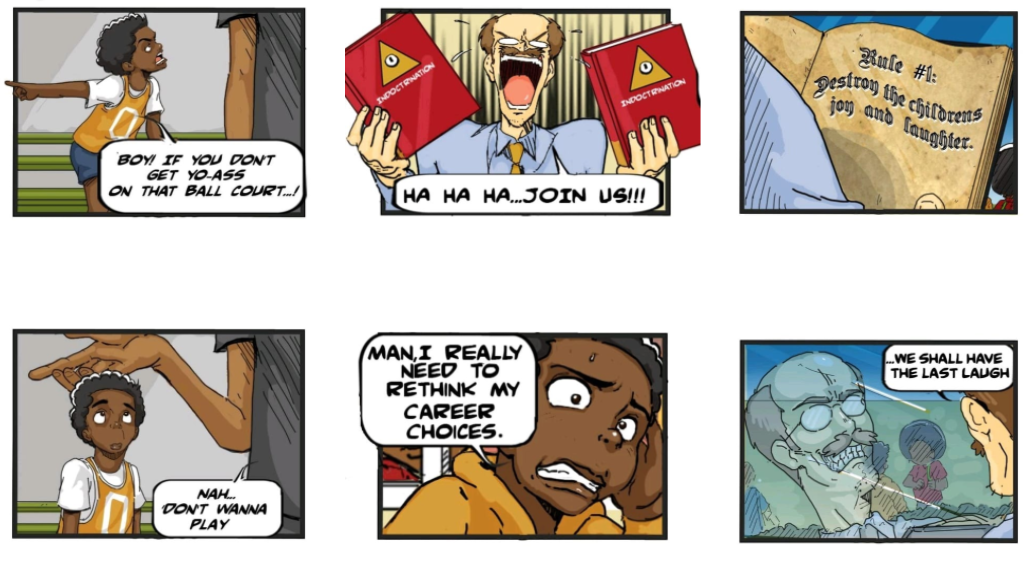 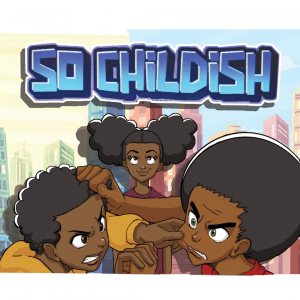 Book Description: Growing up is never easy or simple, but with Josh, Sarah and Jabari at least you’ll get a laugh or two. So Childish is a comedy series featuring the hilarious misadventures of two siblings and a good friend. It’s wild, colorful, and extremely relatable as it goes through the various aspects of youth; featuring topics such as approaching adulthood, subverting expectations, and being true to oneself. This is definitely a good read for all ages and a wonderful addition to your reading list if you're looking for something light-hearted and fun.

So Childish is the perfect amalgamation of humor, life allegory and social commentary. It’s approach on various topics such as the school system, adolescence  and black culture as experienced by black children is genius. Take for example chapter 9 entitled: Not Bout’ That Life, where the character Josh and his teacher Mr.Wilson discuss what happens after Josh finishes school. Mr.Wilson manically states that after school is complete your only choice is to get a 9-5 job to work forever and Josh is not having it. In chapter 10, Mr.Wilson continues to drive home this point however within his hand he holds lesson books that say ‘indoctrination’ showing that Mr. Wilson is not concerned with Josh or any of the students actual education only that the students are conditioned to believe that 9-5 work is their only option after they finish school.

The commentary continues into episodes like Hoop dreams, where character Josh meets the character Cam, an extremely tall student that he has to use a ladder to even get to the wait of. Josh is shown to really want to be a career basketball player as most black boys, specifically black boys from low-income areas often want to. But that’s not what Cam wants. Cam, regardless of his height, isn’t interest in basketball and even say “ Just ‘cause i’m tall, don’t mean I’m ‘s’possed to play basketball.” This confused Josh because in his eyes basketball is his way to success despite his very obvious lack of height.

By far my favorite chapters are chapters 24 and 25 entitled: Rap Translator/Double Standard parts 1 and 2. In these chapters, Josh, Jabari and Sarah are discussing rap music and how it’s interpreted by various different people. Josh and Jabari discuss how rap music, though vulgar, can host deep and complex emotions and commentate on real topics much to Sarah’s annoyance. Sarah then follows up with her feelings on female rap and how many host double standards when female artists create the same kind of rap that their male counterparts do.   What is created are two chapters that perfectly commentate on a social issue using current allusions and great humor leaving you the reader smiling at the writer’s spectacular ability to be socially conscious and funny.

All in all, this comic accels at creating memorable characters, creating short yet fulfilling story lines and getting you the reader involved in the conversation. It doesn’t feel preachy and or over top and nothing is played up. Especially if you are a black reader, the writing alone in this comic is sure to give you nostalgia filled laughs and cackles and will keep you page flipping.

The art for So Childish, is just like it’s namesake. It has that distinctly newspaper comic feel which makes it very digestible and extremely addictive. The art for this comic absolutely helps to sell the story with it’s simple yet well executed visuals. I love the various style influences in the artist, Stephan Linton’s work. You can see the manga/anime influences with the fun chibi faces and cute emoticons, the call back to older comic strips with Peanuts and Garfield inspired moments and even some unique techniques like color blocking.

Linton also throws in fun allusions in his work such as Spongebob in chapter 10 and the Lion King in chapter 4 entitled: Sibling Rivalry. I enjoyed each character’s design and execution as well. While simplistic the character designs were appealing and memorable. The children wear natural hair and have a range of skin tones. The children are wildly expressive and show a range of fun emotions. The teacher is perfectly hateable. From his character design without having read a single speech bubble you already know the man is going to be ‘that teacher’ and I love that! Linton throws a ton of personality into each panel and does a wonderful job mixing all of his influences into his distinct and fun style.

So Childish, is an easy to read yet addictive comic that kept me laughing out loud with watery eyes. With it’s memorable characters, slapstick humor and conscious social commentary it’s absolutely a must read and a more than worthy addition to add to your reading list. If you want get started reading this absolute gem be sure to check it out on the Blank Sands Publishing app, BSP Comics available on both the app store for IOS and google play for Android or on the Webtoons app or https://www.webtoons.com/en/.

10 Horror Comics you Should Read Even After the Spooky Season
REVIEW: St. Mercy #1
Sponsor