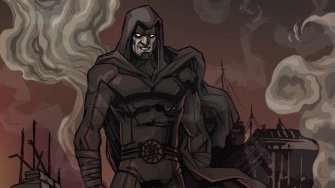 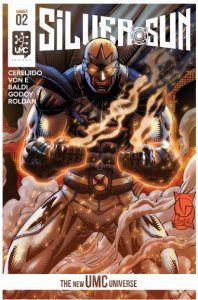 Book Description: Silver Sun is one of the lead ‘local’ superhero characters from Argentinian based publisher UMC Ediciones, the editor says he taps into a kind of collective mythos but at the same time the character is imbued with an unknown, perhaps dark, past that his well-intended actions will cause to be revealed to himself- maybe not for the best. The second volume picks up from where the first volume left off. It moves away from the regular ‘day to day’ activity of Silver Sun to his and his police handler Bianca’s attempts to uncover exactly who the supervillain grouping The Horde are and what their aims are. The story opens with a suspicious character tricking his way into the Ministry of Defence building whilst across town Silver Sun joins Bianca at the scene of a murder victim of Greene (one of the supervillains). As the bogus workman turns into a supervillain, overcomes guards and steals information Silver Sun and his side kick uncover a Chinese glyph type sign at the murder scene that seems to be characteristic for The Horde. On hearing of the incident at the defence building Silver Sun flies with Bianca to the scene and is confronted and surprised by the supervillain whose electrical currents temporarily overcome Silver Sun and he needs the intervention of Bianca to save him as more police arrive. Finding the same Chinese character/symbol at the Ministry of Defence it doesn’t take long for Bianca to discover a site in Chinatown that has that symbol at it’s entrance. Against advice, Silver Sun rushes there only to find members of The Horde awaiting his arrival. A big fight ensues and though Silver Sun overcomes the supervillains he receives a vision of a super destructive character as well as being informed by The Horde that if he could remember his past he would know that he was a killer like them. The strength of the fight clearly surprises The Horde but also Silver Sun as he appears to be tapping into an uncontrollable rage. The story ends with Silver Sun flying off into the distance, clearly troubled by what he experienced during the fight.

The story picks up smoothly from volume one with it being clear there is something bigger than just day-to-day crime afoot.

It introduces us, via crime scenes to other members of the supervillain Horde and the action flows thick and fast as the story line builds up to a climactic battle between a seemingly outnumbered Silver Sun and members of The Horde.

The differing motivations of The Horde are developed and we get a more nuanced sense of their hierarchy and relationship to the protagonist.

Between the action scenes, the story injects a sense of pace and heightening tension.

There is a clearer reinforcement of Silver Sun’s dark, unknown, past and his own sense of dread as this starts to become apparent to him.

All this leads to some effective character development so that Silver Sun is gradually transforming as he interacts with the stories antagonists all the while seeming to leave further behind the ‘comfortable’ previous life as evidenced by his relationship with supporting characters.

The art in volume one was of a solid standard. It develops further in volume two with the addition of extra artists on to the team. There’s a nice mix of perspective shots, colouring is well done and the action scenes very dynamic.

The cover art is once again dramatic but as opposed to volumeone now depicts Silver Sun as a more menacing almost out of control character.

The dialogue is well written though again it does in places just lose it a bit in the translation from its native Spanish into English, however I personally found that the story had enough inherent energy to carry me over that without it being distracting.

Overall volume two manages to be consistent with volume one whilst at the same time moving the protagonist’s story arc and character development along well.

Volume two finishes well poised for the story to develop in future volumes. I look forward to seeing how things unfold and digging deeper into the protagonists mysterious past.