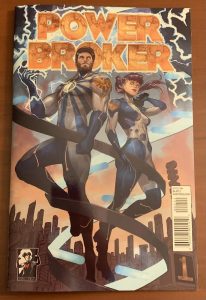 Book Description: Welcome to Potentia, the Mecca of the civilized world. It is the birthplace of super powers. We’re not talking about the ones you’ll find in a comic book or movie. This isn’t a story about a kid getting bitten by a radioactive spider and changing the world. Nor is it a story about a scientist being involved in a freak lab accident that gives him super strength ever time he gets pissed off. This is about honest to goodness super powers. Whether it’s flying, telekinesis, or being able to jump off of a building and land like a blob of silly putty (and get up and walk away from it) it is now possible. Scientists have unlocked the ability for people to do almost anything by cracking the code in human DNA sequencing. After clinical trials these powers are available on the open market. All you need to do is have the money and be able to pass a psychiatric exam. People are taking out second mortgages to be able to fly for a month. The cost is so high because of things like insurance, overhead, and wanting to make a profit when it’s all said and done. Like anything else that’s expensive, it doesn’t take long for people to figure out ways to make a quick buck. Illegal “chop shops”, facilities where you can get the same services for significantly less money, are popping up everywhere. The chop shops don’t follow the same code of ethics and guidelines. Sometimes their procedures go horribly wrong with irreversible effects. To keep this in check the government has created a new agency: the Central Brokering Agency. The agents are called brokers. It’s the brokers’ job to find and close the chop shops. They are also tasked with dealing with the individuals that are “jacked” with their illicitly gained abilities. What happens when someone who doesn’t like cops gains these abilities?

“Power Broker” is the kind of science fiction story I live for. I love anything that while clearly fictional, isn’t that far out of reach. With the scientific advancements humanity continues to make we are rapidly reaching that point. I believe that within our lifetime this could be achieved.

The story also brings to light the “Jurassic Park” perspective. Just because we can, doesn’t necessarily mean we should. Here we see what happens when someone with nefarious intentions gains powers. I’m fearful of this technology being used for military applications. Captain America was supposed to be one in an army. Imagine an army of Winter Soldiers and Black Widows… but with powers.

While there are drawbacks if used for the wrong reasons this technology can also be a godsend. If we can alter DNA to fight things like cancer, heart disease, and addiction it would be earth shattering. This book can easily be the metaphorical lightbulb that pushes someone in that direction.

The fact that in a matter of minutes I can come up with strong arguments for and against the possibilities being proposed in this story tells me that Mr. Vicino has something special. Anything this polarizing is going to make people sit up and take notice. This book is on the forefront of what’s to come in society and I love it for that.

The artwork in “Power Broker” reminds me of Rob Liefeld’s work with some differences. Most notably, every character isn’t accessorized with pouches galore. Every character isn’t drawn having three percent body fat. I liked the panels depicting the mutations when things go wrong.

As a geek on a budget I highly recommend “Power Broker”. It’s “Popular Science” with a plot. It will change the world.

You can get your copy of “Power Broker” this week at: