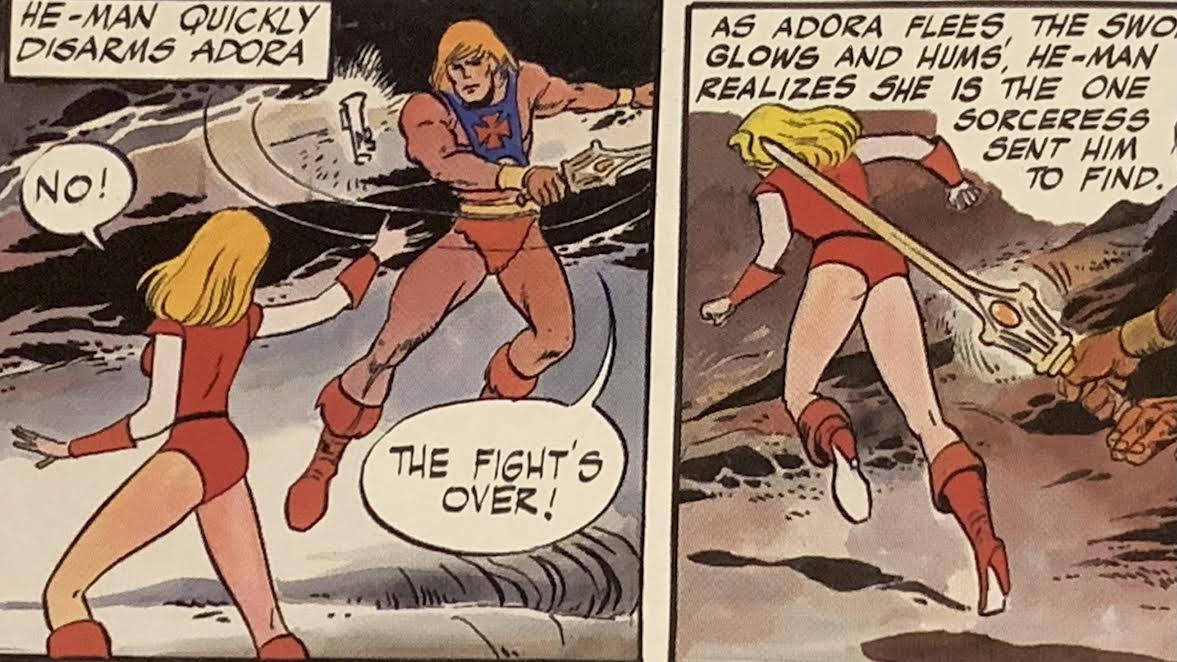 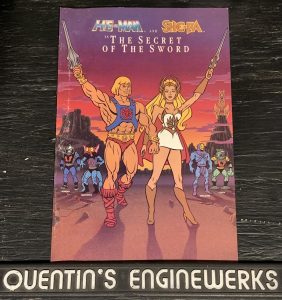 Book Title: He-Man and She-Ra: The Secret of the Sword

Book Description: “He-Man and She-Ra: The Secret of the Sword” is an ashcan book viewers were given when they went to see “The Secret of the Sword” in theaters during the movie’s release in spring of 1985. Inside of the front cover is a sweepstakes entry that gave entrants the opportunity to win prizes ranging from toys, to a He-Man or She-Ra sleeping bag, to a birthday party with a special appearance from the most powerful man in the universe. The book begins with the Sorceress dreaming about a day 20 years prior. On that day Hordak came to Eternia and stole Princess Adora from the royal palace. Hordak then escaped through a dimensional gate. When the Sorceress awakens the Sword of Protection, a weapon not unlike He-Man’s Sword of Power, is calling to her. It wants to be with its rightful owner, Princess Adora. The Sorceress summons Prince Adam to Castle Grayskull. When Adam arrives the Sorceress tells him about the Sword of Protection. She tells him that he must go through the dimensional gate to find its owner. She omits Adora’s name or that she is Adam’s twin sister. Before you can say, “By the power of Grayskull”, Adam and Cringer go through the dimensional gate and find themselves in the strange world of Etheria. Here they take their first steps in discovering the secret of the sword.

In case you weren’t aware, I love almost everything from the 80’s. He-Man was my jam then and he continues to be now. When Lord Trekker holds aloft his magical remote start for his car to give it better range I periodically say, “By the power of Grayskull!”

It suddenly occurred to me that key fob manufacturers could make a killing by having remote starts in the shape of the Sword of Power, Seord of Protection, or Sword of Omens. I’m sure I can’t be the only geek out there that would be all over that. But, I digress.

For this book Mattel made a 91 minute movie into a six page book that touches on the key notes of the movie. That averages out to approximately one panel for every five minutes of screen time. Needless to say, a lot of the story was cut out to make it fit in such a limited number of pages. It does effect the story.

The cover art is exactly what one would expect for a book about a movie based on an animated series. We have the cartoon likeness of He-Man and She-Ra in the foreground with Skeletor, Hordak, Leech, and Mantenna in the background.

On the interior pages we get away from the cartoon feel for a handful of panels. There were panels of Hordak and the Sorceress that I liked a lot. I’m glad Catra had a limited role. I don’t know why, but I never particularly cared for her.

As a collector’s item this book scores a lot of cool points. It had a limited release that was targeted at children who attended a movie 37 years ago. Of the books that survived the movie and trip home, the front cover was destroyed on many of them by people cutting the sweepstakes entry form off of the cover. Shortly thereafter they became trash can fodder.

In short, this is a somewhat rare book. Additionally, it has very early appearances of She-Ra and Hordak in comic books. Their first was in the mini comic books that were sold with the figures. For most people, “Secret of the Sword” was the starting point for these two key characters.

This book is a must have for fans of “She-Ra” and “Masters of the Universe” for all of the reasons I just listed. Be mindful, you will be looking at collector’s prices to get it. For the casual fan, this geek on a budget recommends passing on this one. If you’ve seen the movie you know the story. This book is a very abridged version of the movie that doesn’t give the reader any new content.