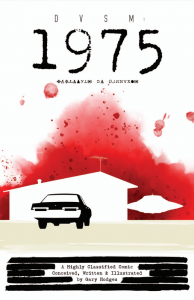 Book Description: Early one autumn morning in 1975, two "men in black" set off for a sleepy little town in rural Arizona to collect yet another witness account of a UFO sighting. It was supposed to be routine. What they found was not. This is the story of the first salvo in a secret war - one you were never meant to know about. Learn the Truth. But tread carefully now, they are watching YOU.

DVSM 1975 is everything I want in a story regardless of genre or medium. DVSM 1975 is a huge accomplishment for Hodges because he told a not-so-unique story in a very unique way by masterfully blending some of the Sci-Fi tropes we’ve grown to know, love, and crave!

Hodges utilizes both his acknowledgments page and an introduction as a tool to immerse the reader into the “highly classified” story he created. Brilliantly he forged those two pages into government documents, littered with redactions, blacking out certain sentences. It was truly a joy to read, filled with humor and wit and the story hadn’t even started yet.

It’s of my personal belief that many Sci-Fi and Fantasy stories benefit greatly from a prologue or preface.

The actual story and illustrations start by following two men in black suits on their way to investigate a citing of the Extraterrestrial kind. This was when I realized that Hodges’s dialogue was going to drive this story, though I suppose the reasons listed above could have given it away as well. The two men, partners, start by having a casual conversation, that Hodges gently steered towards a much deeper philosophical one about the nature of their job and the benefit it may or may not have for the public. It stopped short when they arrived at their destination to find the destruction caused by the ETs was well on its way. In an effort not to spoil the climax of the story I will be brief; The aliens have a mind control ability and it is up to the men in black to save a family of four. The story ends with not only our protagonist but with you the reader reflecting on the chaos that ensued. It’s was over fast, but the dialogue cut deep into my psyche because I was so immersed in this highly classified file. Then, as if it could only get more interesting, Hodges included some torn newspaper clippings into the last pages, with files leaking to “future leaks”, such as DVSM 2017 and DVSM 1997.

The only reason the story section did not receive a perfect 5 Stars was that I’m not sure where the Dinosaurs and Marsbots play a role, let alone when they compete. As a reader, I was disappointed that I saw neither of those (that I know of), nonetheless, the story was amazing.

The art was very well done, but the dialogue was so good I barely paid attention to it. That’s not a slight at all, if you’ve read my reviews before, I can be rather harsh on black and white Sci-fi and Fantasy tales. In this case, however, it feels like this story has to be in black in white. It accents the entire vibe that Hodges’s creation of DVSM represents and it emphasized the spookiness that ETs and the men in black embody.

The cover is a perfect representation that less is more. The contrast between the red, white, and black could not be more of an eye-catcher.

I know I’ve talked highly about the dialogue of this story, but I believe it’s the Mechanics of DVSM 1975 that make this story so special. Hodges’s acknowledgments and introduction break down a wall with the reader. Not the fourth wall, but some wall only the men in black know exist and he does it in a very Vonnegut-Esque way. The combination of this, his lettering, and the use of newspaper clippings, government files, and redactions make this story feel like a big piece of artwork, rather than just a comic book.

DVSM 1975 is a must-read, I look forward to more leaks and hold a tremendous amount of respect for any creator, such as Gary Hodges, who takes on the monumental task of doing EVERYTHING (writing, lettering, & illustrating) for their story.