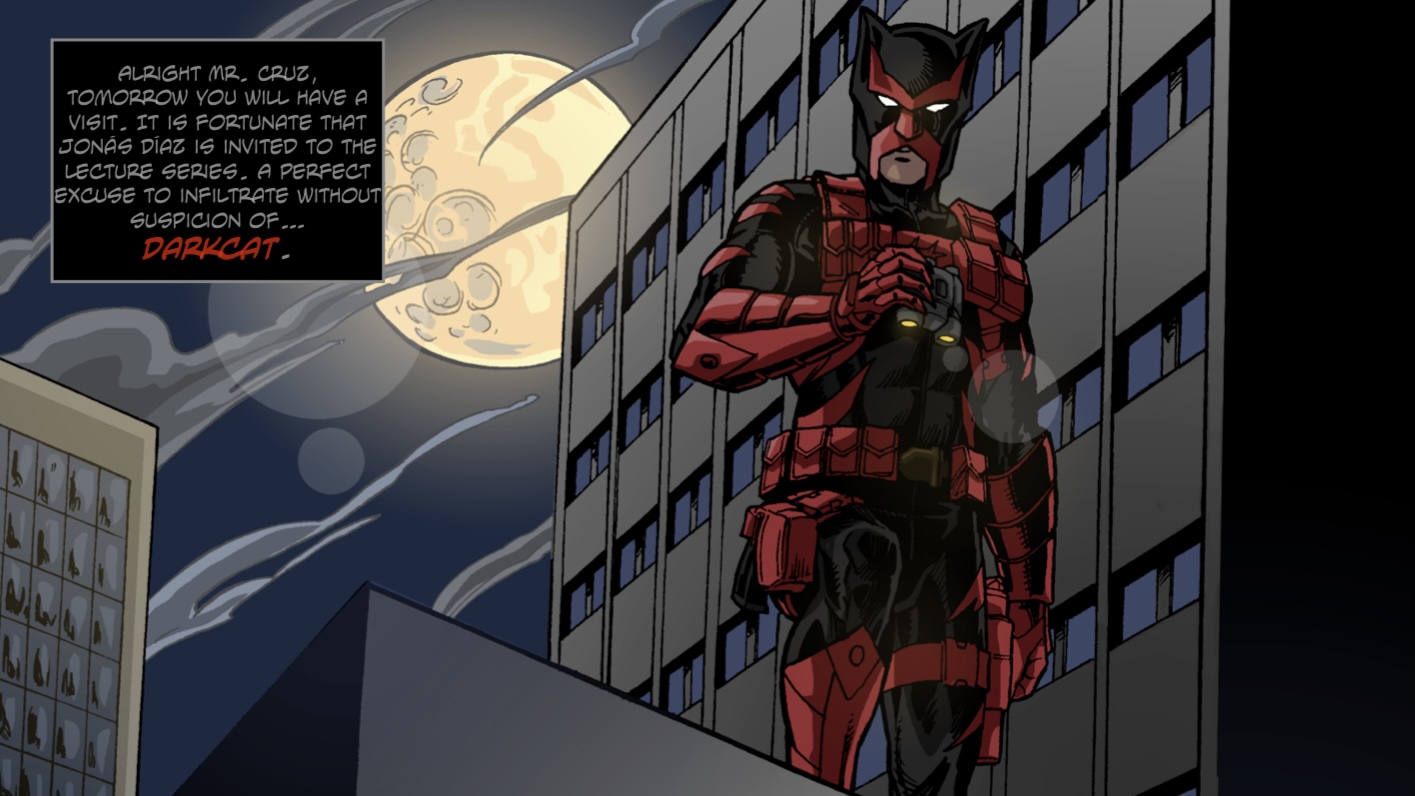 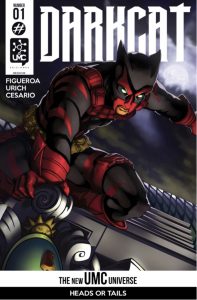 Book Description: This issue begins in 1982 with an explosion in a warehouse that leads to the escape of several test subjects, referred to as “project bastet”. Inside the warehouse fallout, a figure in purple pants picks up a mysterious book from the wreckage. The story transitions to the present day, and we are introduced to our hero, Darkcat, who is stalking a man the news report identifies as Javier Cruz-conspicuously donning familiar purple pants. Darkcat has been trying to uncover what happened to his father, and all the clues right here, to Mr. Cruz. His plan is to infiltrate the hotel, without the mask, as his alter ego, Jonas Diaz is invited to the lecture series that Javier Cruz is hosting, to get information from Javier Cruz, up close and personal.

First things first- the art in this book is super fun. It is full of notes that remind me of the early 90s image, and the books I used to love to read about in Previews and Wizard magazine when I was younger. The character design is a blast as well, I just reminded me of building a world with action figures and telling an all day story on the floor during summer vacation.   Issue One of any book usually carries the potential to get long-winded in trying to establish the world we are being brought into, and the laws of the world. With a brand new title, with brand new characters, Mechanics are crucial. A main character having two first names(Javier Cruz introduced by the news report, but on the next page he is referred to as Carlos Cruz) as this small hiccup can create a disconnect for the reader while we get to know the world.  That being said, while this is a whole new world, the formula of this story is one that is tried and tested-vigilante detective hero, looking for clues to uncover a plot that will reveal the big bad and clear the name of someone important to the hero- Its proven to work, but there has to be something to sink your teeth into beyond the formula. DarkCat shows it has enough substance to get there in places but I felt it needed a bit longer “in the oven” to build this world and the characters in a way I could  bond with them more. There were parts where I felt the art stood alone to explain the scene, and the dialogue almost bogged it down. There were other areas, that I would’ve wanted more exposition, that would have brought me into this world even more. The first example is the mention of project bastet, which was the first thing that really caught my attention- as the issue goes on you learn that there is more to Darkcat than just a name, there is a cat based secret society in this world, Nueve Vidas, and considering Bastet is the name of an ancient cat deity, that could’ve created more intrigue, more curiosity in a re-read, than trying to make sure the direction was understood clearly.  All in all, there is a lot of good with Darkcat #1, it has all the elements, I just feel I would have enjoyed the story more, if I had more time with the “who’s” and “what’s”, because I want to care more about the “why”. There is definite potential with this title, and it could be something special, provided more time is spent developing some of these key points more, and does not race too fast to the finish line.

As Owner/operator of FogBreaker Studios, Jason looks to write stories that entertain. While advocating for his fellow black creators and cult/abuse survivors, he uses his pen to describe his past and the world around him with a writing style that can paint any mood.