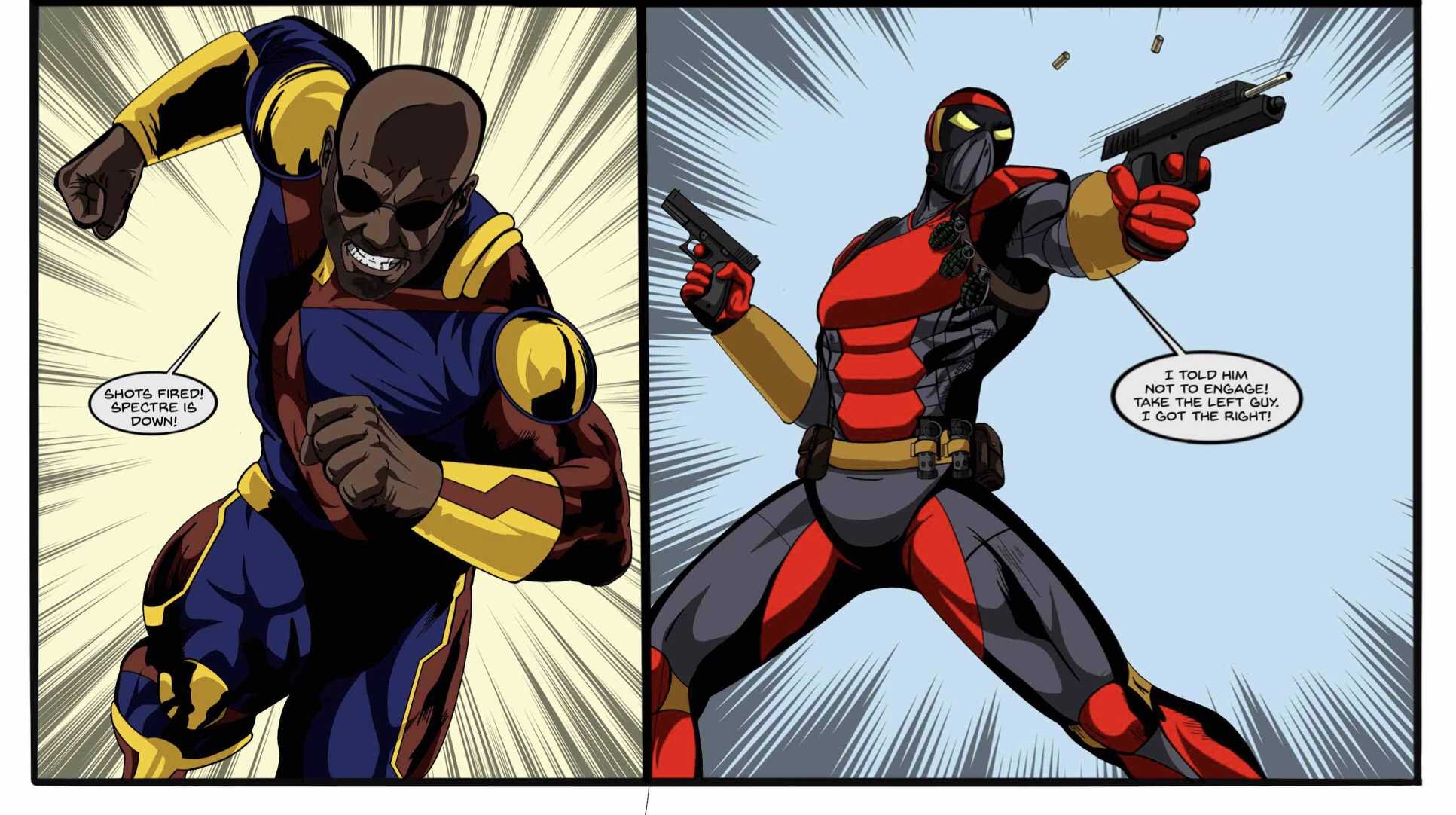 Christopher Michael, the owner of Homebrewed Comics, started off his pitch to me about this book with, “The first 8 pages are a bit wordy as I used it as a forward with pictures to world build.” He wasn’t lying. The first pages are wordy, and my particular screen was hard to read. That being said, the context the first eight pages give is important and, to Michael’s credit, does help build the world of CRIT.

The first ⅔’s of CRIT is your average superhero team book. There isn’t anything particularly special about it. The world CRIT is set in, while unique, is familiar. The team, made up of Bolder, Caliber, and Spectre, is battling crime at the behest of a wealthy corporate benefactor. The opening story, at first, isn’t bad, but again, nothing overly special. It feels like you’ve read it before. (Though, the characters are a bit more fun than your average hero team.) CRIT breaks into a secret headquarters of a gang, each team member takes turns using their personal special power to defeat groups of bad guys, and they, predictably, make it to their target. They lay out a battle plan, and THEN EVERYTHING FUCKING CHANGES!

Holy shit, does this book take a complete 180 in the last third of the story! I went from wondering what I could write about it to being amazed and impatient to write the review! I’m definitely not spoiling the last third, but it’s worth the read. Whether Michaels intended the first part to be familiar and predictable or not, I don’t know, but it definitely works in the favor of the climax of issue 1.

Michaels clearly has a talent for writing, but he also did the art for issue 1. This is his first time drawing a comic book, and it’s not a bad effort at all. While the art won’t be winning any awards in issue 1, I’ve also seen much worse art in indie books. I’ve also seen a sneak peek at the art for issue 2, and Michaels has considerably improved his skills further between the two issues.

CRIT is well worth the read. I’m eager to see the full issue 2, which is currently on Kickstarter (link below), to see how the story continues to evolve. There are a lot of questions left at the end of issue 1, I’m hoping Michaels gives us a few answers in issue 2 but also keeps some close to the chest for now!

CRIT is a superhero comic based on a tabletop game created by Homebrewed Heroes. It is an action/adventure series that centers around a group of friends that gained powers after an accident at work. The corporate tech giant known as Technetic learns of their powers and looks to profit off the group fighting criminal activity in New Orleans, their home city. As the team becomes more established, they learn that a rival company, Alchemex, has dirty secrets as the company seeks to discover the source of the team’s powers. The first year of the series follows the team as they challenge Alchemex, develop their powers, and grapple with choices that test whether or not they can truly call themselves…superheroes.