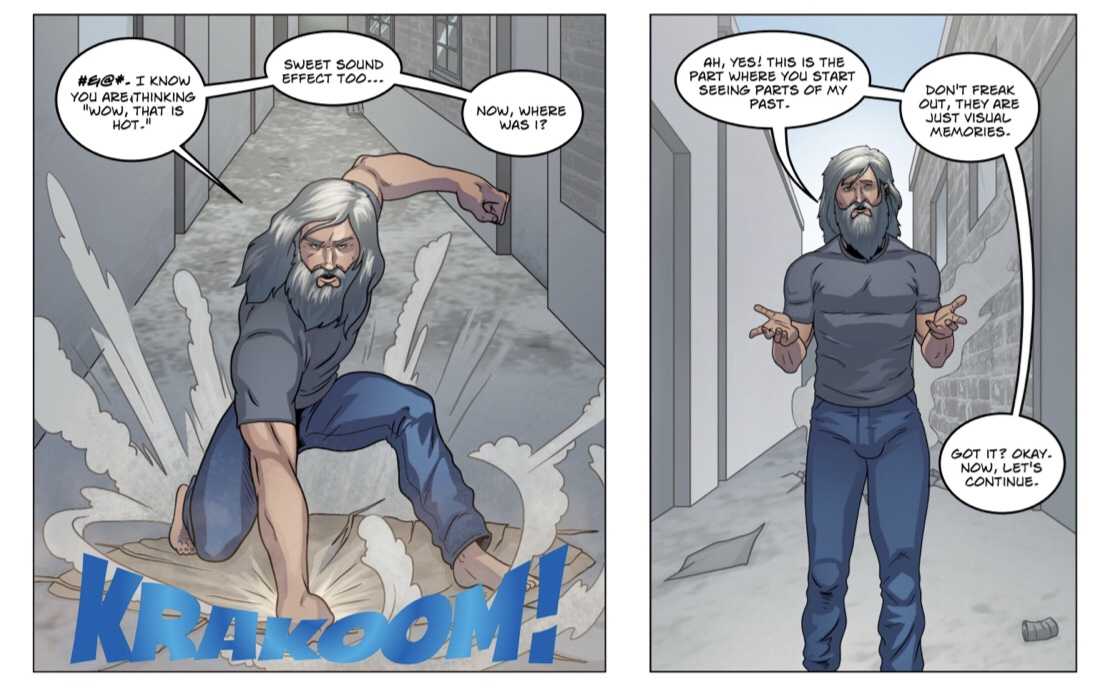 Tilt is the story of the fourth wall breaking, homeless, snarky superhero, Patrick Eitilt, or Tilt, brought to us by Catalyst Comic Studio. Tilt is written by Aaron Dowen, drawn by Joe DeSantos, with colors by Ramon Amancio and covers by Matt Sotello. Patrick is on a mission to discover the Council Of Elders and why they tortured, manipulated, and made him their personal mercenary for years. All told with Tilt’s specific brand of humor and sarcasm.

Issue 1 introduces the character and sets up the first story arc’s premise – Tilt is on a mission to discover the Council of Elders. Tilt 2 furthers the story and begins introducing the broader world of Boston heroes in the Catalyst Comics Universe. Both issues are a fun read with classic superhero storytelling and hilarious commentary from Patrick.

Tilt, the series, explores and makes fun of, the classic superhero tropes we’re all used to, making the comics feel familiar and new all at the same time. Tilt has the powers and abilities to seemingly be this universe’s Superman, but he just doesn’t really give a shit. It will be interesting to see Patrick’s evolution throughout the series to see if he remains indifferent to being a hero, or if he’ll eventually wear that mantle proudly.

Tilt is a fun read for any fan of the superhero genre. Dowen’s writing of the series is exactly what you want in this irreverent series. He knows and loves the genre well enough to tell the tale of Tilt and make fun of all we Comix fans hold dear. Dowen has a talent for telling a tale with wit and humor while still holding a deep respect for the genre, as further demonstrated by his other current title, Welcome to Everville.

DeSantos’ art is great. It captures the action of Tilt as a hero and his sarcasm as a smartass perfectly! Having briefly spoken with DeSantos during an interview, I almost get the sense that he approaches life with the same sarcasm and irreverence as Tilt. Dowen and DeSantos make an excellent team for Tilt!

At the time of this writing, Tilt 3 is about to launch on Kickstarter, and I am eagerly awaiting the next chapter in Tilt’s story. Dowen and Sotello have a vast and far-reaching plan for the Catalyst Comics Universe and it’s exciting watching it all start to unfold! The Tilt 3 Kickstarter campaign has tiers that allow you to get all the books you’re missing for amazing prices.

Be sure to check our Catalyst and all their titles at https://catalystcomicsstudio.com/

You can get notified of the Tilt 3 campaign launch here – https://www.kickstarter.com/projects/aarondowen/tilt-issues-1-3-superhero-comics

Tilt is the fourth wall breaking, gritty, and self-aware superhero story that follows Patrick Eitilt; a homeless superhero in Boston. It chronicles the story of his past, and what pushed him into becoming the hero that he is today. His story is tied directly into the Catalyst Comics Universe, and will explore the agents of the Council of Elders; a secret organization bent on exploiting, controlling, or eliminating, hyper-evo’s. Patrick became the subject of countless experiments, each grooming him to be one of the most powerful agents of the Council. Now escaped, Patrick is dedicated to keeping his city safe, while tracking down those that manipulated him.