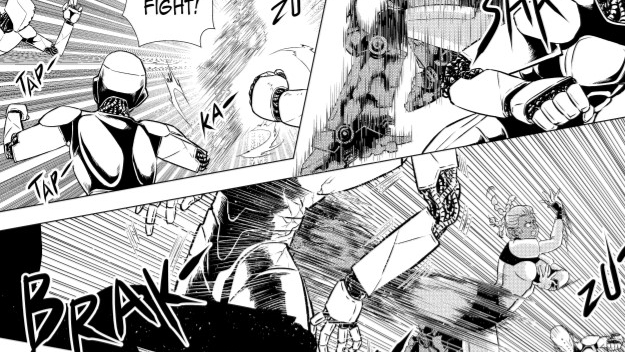 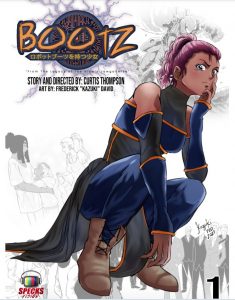 Book Title: Bootz; From the Legacy of the Views Jawga Verse

Book Description: The story starts in a food gulag (galactic combat ground) where participants on-world battle it out with droid adversaries, their success gains them food tokens. Bootz, the protagonist, is a young female from Earth who swoops in to save her friend who has just been wounded by the droids. She sets about taking on the droid challenge herself and round after round of combat moves at a swift pace. It soon becomes clear Bootz is a strong fighter who is rapidly kicking droid ass and collecting tokens. As she breaks records as well as droids we hear her being discussed by other participants and through them learn of her background and origins.

It turns out her roots are set in organized crime families back on Earth and her parents trying to make a break from that environment. The story shows the family's happy early life and how their past irrevocably catches up with them. This initial chapter finishes with the impending reckoning the family face as they are confronted by gangsters.

Bootz launches with a fast-paced] video game-style setting but manages to transition to a slower paced forbidden love up against the odds origins tale using both to introduce a kick-ass type character, all this set in an anime style.

As noted the story commences at a rapid pace as rounds of combat go by one after the other. The art style perfectly matches the frenetic pace and video game-type vibe. The onomatopoeia is really dynamic and creatively used.

The pace of the story has to change as it starts to introduce Bootz background and it does this well.  Literally, it takes a toilet break – again with humorous and creative use of toilet sound onomatopoeia.

The backstory of Bootz star-crossed lover’s parents and how their happy home comes tumbling down is again well set and by the end of the story it is perfectly poised for some bad things to start to befall the family.

The cover art features the protagonist in a nice low angle contemplative pose- in colour. The rest of the art is in greyscale. I think some stories definitely call out for the dynamism that well-used colour can add. This story is very dynamic and I think not having colour and in fact, having a soft greyscale rather than even a stark B&W effect waters down what should be a hard-edged piece quite a lot.

One other thing that for me didn’t work as well regarding the internal art was that in some panels the style of the background was out of keeping with the style the characters were drawn in. What made this worse was that the background had more detail and I found it drawing my attention rather than the characters. This all happens in the second ‘back story’ part. The initial combat sections are really dynamic and well-drawn.

A high-powered story Bootz chapter 1 is left well poised at a crunch moment for our protagonist and I would be really interested to see how she develops into her latter day character.