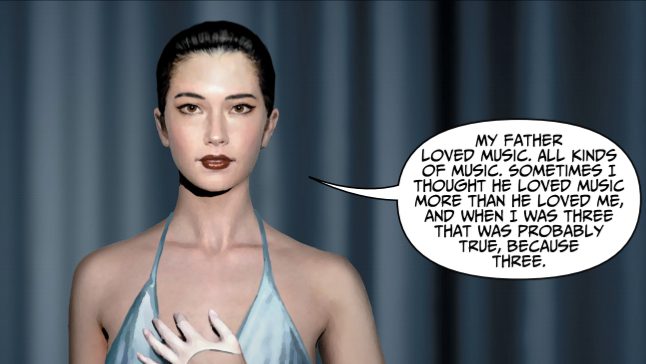 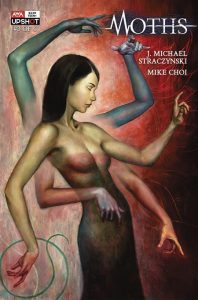 Book Description: We get to see Emily do a performance art skit in which her dancing, coupled with her peers of empathy, amazes the entire crowd. A spectator named Nathan is particularly enthralled by Emily’s performance. He’s taken to having flowers (along with his phone number) sent to the theater in hopes that they will be forwarded on to Emily. Unfortunately for Nathan, Emily has another matter that requires her undivided attention first. The Resistance is trying to end a civil war in Belarus with a minimal number of casualties. Emily’s powers could go a long way towards making that happen. Now it’s up to Emily to turn the tide in what could be a bloody war.

For a comic book, one would expect a touch more action and a bit less preparation for all contingencies in case there is some action. Even without the traditional amount of action in Moths #3 it works. I love how there’s an emphasis being placed on the value of not fighting unless it’s absolutely necessary. I am curious why the card with Nathan’s phone number on it said James. I guess we’ll learn more about that in Moths #4.

This cover of Emily dancing is very well done. It looks like she could come straight from the stage and into your living room. While it’s well done this isn’t a cover that makes one stop for a second look.

Comic book purists believe that being able to easily tell that something is a piece of artwork is part of what makes comic books great. They believe if you’re looking for something that realistic you should go to the movies or buy a photo album.

Others say this is a glimpse of the future and it should be embraced. What’s currently an ability that only a handful of individuals possess is going to become very common over the next ten years or so.

Personally, both sides are right and wrong. In the correct context it can be incredible if it’s very well done. However, if the majority of the book is in this style it starts to lose its effectiveness. Moths #3 starts to skate pretty close to that edge.

As a geek on a budget I say this series continues to be worth the price of admission. I like the direction we seem to be going in. Now let’s just try to avoid any hairpin turns.