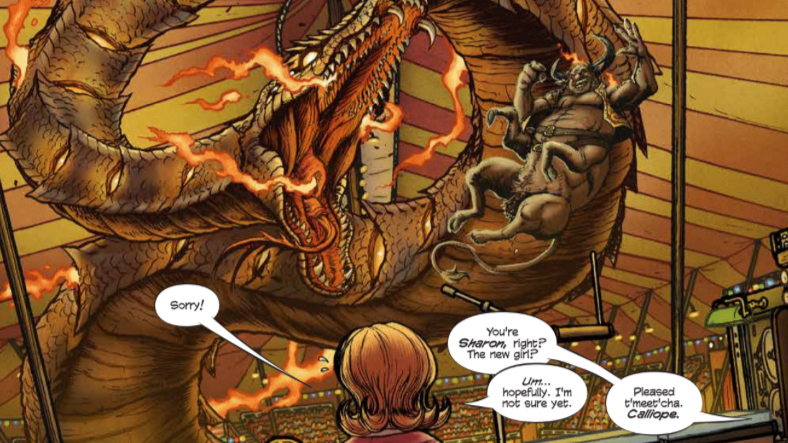 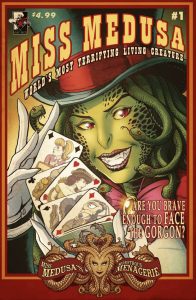 Book Description: Miss Medusa’s Monstrous Menagerie is the tale of a circus where the majority of the cast is a mythical or fantasy creature. The show goes from town to town all over America giving the audience thrills all along the way.

We see the story from the perspective of “Sharon”. Sharon is a dwarf that is hoping to join the staff as the entourage’s publicist. She arrives for her interview in the middle of a matinee show.

Rather than waiting on a bench outside for the show to be over she gets to watch the show in the sound booth with Calliope. Calliope is a Greek goddess that’s often referred to as a muse. When she’s not running the soundboard she does backup vocals for some of the performances.

Sharon gets to learn some of the nuances about the show while waiting for Gina Tatapolous. When Medusa comes up to the sound booth to speak with Calliope she tells Sharon that she can meet with Gina in trailer 16 after the show.

We then shift perspectives to Medusa’s. She’s the emcee of the big top. She’s also overseeing the entire staff. When a couple of her vendors get out of line she’s forced to take immediate action, and then get on with the show.

After the show Sharon meets with Gina in the trailer. Gina is actually Medusa. Sharon explains to Her that she has actually been doing publicity work for the circus for a week and managed to create enough buzz to create several sellouts.

Sharon also explains that she’s truly a dwarf. Her family was from Germany, but they had a run in with King Ludwig that forced them to leave. They came to America pretending to be Jewish little people. Sharon argues that her best selling point is the fact that she appears to be human so she can interact with humans without them getting squeamish. With that Sharon has the job.

From there we see the two of them walking around the trailers. Medusa has to deal with a union representative about what happened during the show. Then we see Medusa handle a contract negotiation. The issue wraps up when we learn that there seems to be trouble with the “Atomic Ants”.

Of all the titles I have read over the years, I have never come across anything quite like Miss Medusa’s Monstrous Menagerie. It doesn’t lead the reader down a path of trying to find out who the killer is. It doesn’t appear to have a “will they or won’t they” romantic undertone with the characters. We don’t see an antagonist that must be stopped before they destroy the world. Miss Medusa’s Monstrous Menagerie forgoes all of these things in favor of going for something different. I love that.

In telling the story of a circus family we get to see behind the curtains and learn about the dynamics amongst the cast members. Just like any other job, there are individuals that don’t like one another. There are spouses working together. There are those that think they’re above everyone else they work with. The only difference is these individuals are all mythical and fantasy creatures.

The way Medusa/Gina runs the business while also emceeing the show reminds me of Harold Zidler in Moulin Rouge. She has to maintain a balance of keeping customers happy while running a profitable business. She does so with great (albeit somewhat devious) finesse.

I like how the artwork on the cover is done in a manner that makes it look like a poster from the circus. Having some of the characters we meet along the way portrayed on the playing cards Medusa is holding us a nice touch.

The artwork on the interior pages is terrific. It’s detailed with crisp lines. The coloring is spot on. I really liked the way Hob and Trash were depicted.

Miss Medusa’s Monstrous Menagerie is what you would get if you were to mix Prairie Home Companion with Percy Jackson and the Lightning Thief and then add a dash of Moulin Rouge. As a geek on a budget, I’m all in on this title. I love the originality and can’t wait to see where the story goes from here!

You can get your own copy of Miss Medusa’s Monstrous Menagerie by backing the Kickstarter at: