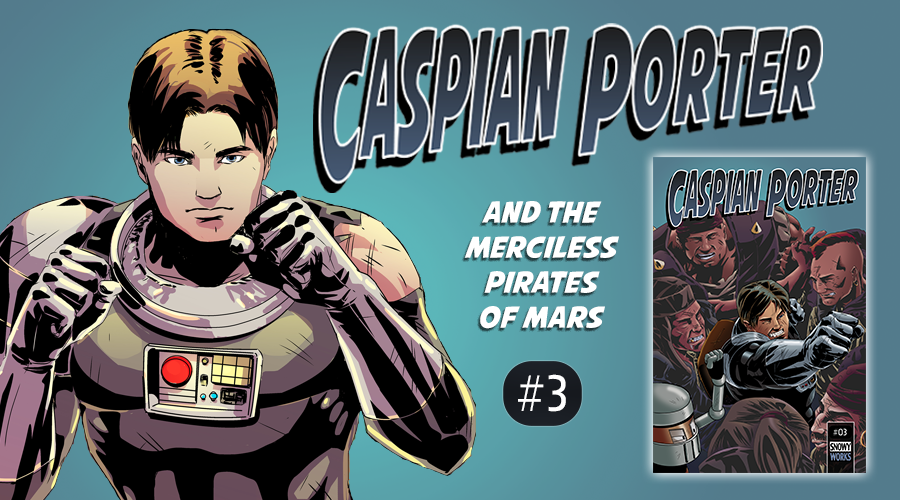 Caspian Porter is a sci-fi adventure series centered around a space delivery man named Caspian. Caspian and his service robot, nicknamed Curbie are thrust into an intense situation after Caspian drunkenly gambles away his employer’s cargo. On the run aboard the spaceship Assurance, Caspian and Curbie fly directly into a wormhole, shooting them 500 million years in the past. More than meets the eye when they discover Mars is a lush and thriving planet!

In this latest issue, Caspian and Curbie come face to face with the pirates of Mars as they are trying to salvage Caspian’s crashed ship.  Caspian faces off with the pirates while Curbie goes full attack mode!  Ratchet and Piper begin to catch up with Caspian and discover a bit more about Mars.

The series is published by SnowyWorks and is created by Drew D. Lenhart, Juan Fleites and Jonathan Wetmore. Drew Lenhart is on the script, letters and layouts. Juan Fleites provides line art and interior colors. Jonathan Wetmore assisted with story outline and plot while coloring the cover.

This Kickstarter will provide fans with multiple different covers including a dazzling holographic cover option!  Options and addons to get previous issues of Caspian will also be offered!