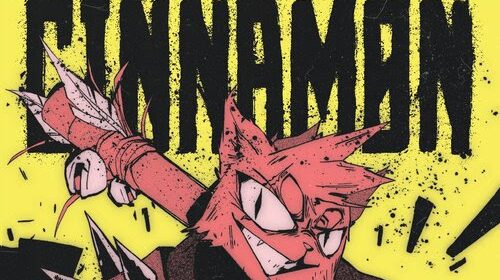 FOR IMMEDIATE RELEASE: CINNAMON #1 BLASTS ONTO THE COMIC SCENE WITH PREVIEWS’ ORDER CUTOFF ON MAY 27TH

Cinnamon features your perfectly ordinary, average housecat. At least until we get a glimpse of the world through her eyes! Countertops become skyscrapers, cat toys become biker gangs, and perilous giant robots rampage on the daily! Get drop-kicked onto the action packed streets of Big Kitchen City, as she fights the dark forces that dare to keep her from her favorite treat… Catnip!

Here’s what the Pro’s are saying:

“Cinnamon steps into the mind of a cat and revels in the untethered rebellion of a cat’s imagination. It has the verve and cleverness of Tank Girl and an expressive style that’s so punk.”
David Brooke, AIPT Comics

“Cinnamon crashes through the mean streets of your apartment with the anarchic charm of Tank Girl, and explodes with kinetic energy and a surprising amount of heart”
Joe Glass (The Pride, The Miracles)

“Cinnamon by Columbus, Ohio’s own Victoria Douglas is so charming, so fun and impossible to hate. It’s oozing with creativity, taking a simple concept and turning it into a shonen-style action comic. This was a blast.”
Matthew Erman, (Long Lost, Witchblood, Good Luck)

“Victoria created a unique gem, something fresh that I believe can be their big break in the comic industry. It’s charming, funny and brilliant. I did fall in love with Cinnamon in a heartbeat, can’t wait for the readers to feel this artistic ‘’coup de foudre’’ as well on July 28th.”
Kevin Roditeli, (Freak Snow, Happy Tank’s Publisher)

With Previews Pre-order cut off on the 27th May, CINNAMON #1 is available with two additional variants on offer. Use the following codes: