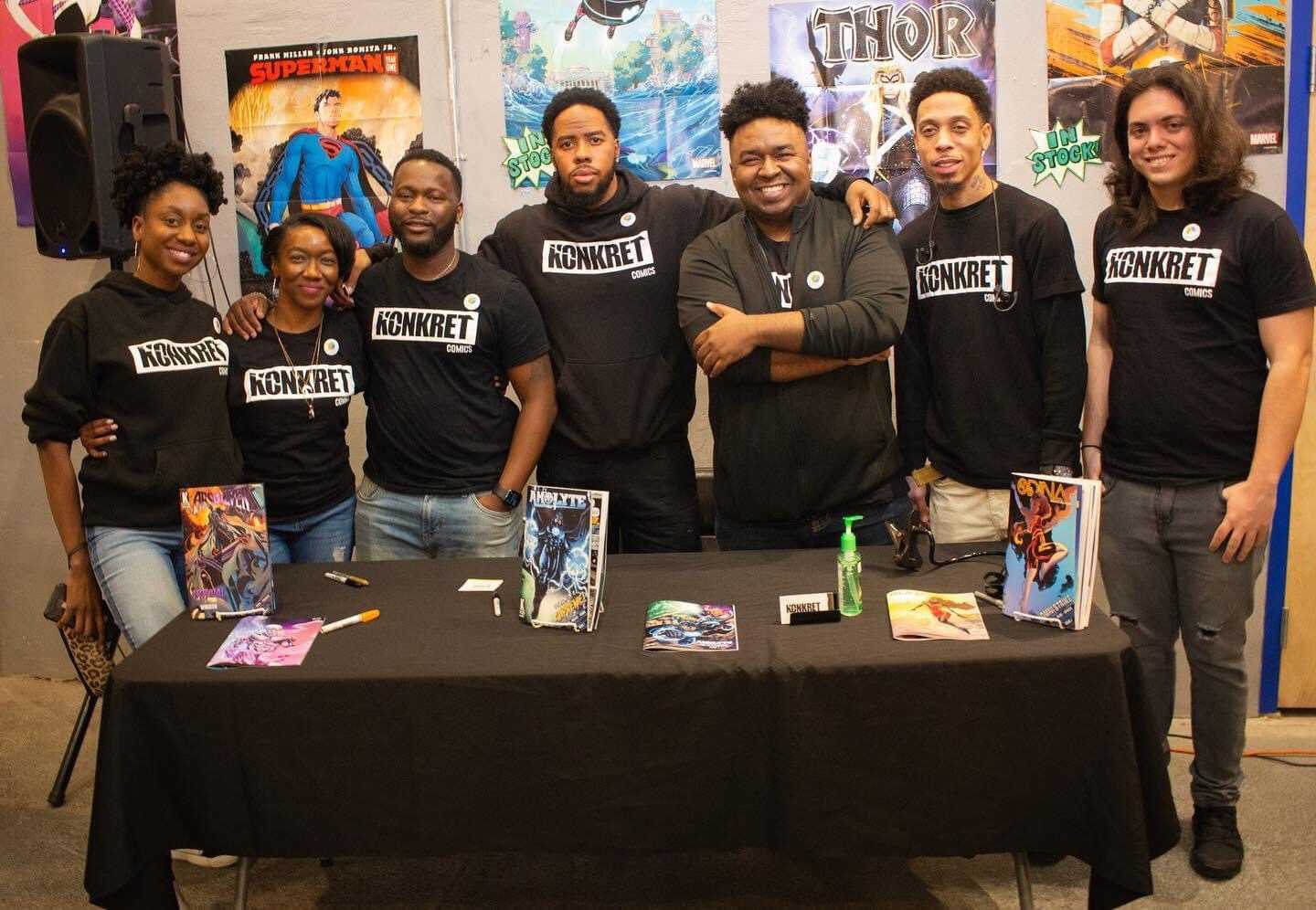 I recently realized that I had never written or filmed a review of any of the Konkret Genesis: Year One comics. How did that even happen??? I’ve interviewed Konkret three times, but never reviewed their books. Well, shame on me, and here we go! A bit of a warning first, this review will be more of a nostalgic review for reasons I’ll explain in the next paragraph.

Konkret Comics came to my attention one day as I was scrolling through my Instagram feed. A former friend has posted a Storm vs. Odina meme and I paused to try and figure out who this Odina was. Konkret Comics was tagged in the post, so I headed over to their profile and was amazed by what I saw.

When I was collecting comics in the 1990’s Independent Comics, in the middle of Tennessee where I was, meant one of two things – Image comics OR the weird guy that hung out at the comic shop trying to sell hand-drawn comic books from his car. (I know this wasn’t the indie scene everywhere, in fact, the 90s was an indie renaissance in many urban areas… just not Middle Tennessee.) On Konkret’s page, I found a new world of indie. The modern indie movement wasn’t black and white, it wasn’t drawn with colored pencils, it wasn’t cheap. It was high grade, professional-looking, and professionally printed books. That same day I bought Konkret’s Genesis pack of their three flagship books, and more or less, The Indie Comix Dispatch was born.

Akolyte, Odina, and Absolver are a perfect intro to the indie world. Each book features detailed art, unique and well thought out characters, good dialogue, and a story you want to read. The creative minds behind Konkret, Lonzo Starr, Onaji Rouse, and Jermael Lessey, are bringing to life diverse, nuanced characters. Their books are full of proudly black characters who are written by a black creative team. The difference between the Konkret characters and black characters who are written by non-black people and appear in mainstream comics is night and day.

This isn’t a review of each book, but rather an endorsement of the entire Konkret Universe. The line-up of Konkret year one titles has your classic superhero title, Odine, your galactic, cosmic power title, Akolyte, and your dark, supernatural title, Absolver. (And in year two they’re adding Andy Starboy, a fun sci-fi alien title).

To give you a better idea of each title here’s the break down from their original Kickstarter:

In a galaxy far from his own, Demetri Price finds himself face to face with destiny. He must accept his legacy and embrace a power he never knew, in order to protect the people he loves. Does Demetri have the courage to become The Akolyte, Guardian of the Cosmos?

Written by Onaji Rouse, we find our titular heroine and her Omni Strike team facing Felix Rowe, a man whose powers have grown exponentially. With the fires of their battle barely cooled, Odina and her team learn that Felix Rowe is just the tip of a deepening mystery. Can Odina trust the mysterious stranger with one too many answers? And who is the enigmatic and deadly Lady Tiye?

Appearing on the gloomy streets of Caesar City, the wraith known as Absolver returns with no memory of his past. With his guide Lea, Absolver will learn his purpose. But he is not the only thing that returned. Something far more sinister has made its way passed the gates of Hell. As their fates collide, is Caesar City ready for the wraith of vengeance?

You can still grab all the Year One titles off of Konkret Comics website (https://www.konkretcomics.com/), but currently at the time of writing, their Year Two Kickstarter campaign is running and you can get all the Year One and Year Two titles on different reward tiers on Kickstarter (https://www.kickstarter.com/projects/konkretcomics/konkret-comics-presents-genesis-year-two).

If you’re looking for an indie comic universe that is sure to keep growing, is unapologetically black, and has a large fan base already, you need to Keep it Konkret!

What is Konkret Comics?

Konkret Comics is an Independent publishing company launched in 2018. This company is a branch of Konkret Muzik Group.

Who is Konkret Comics?

Konkret Comics is a collective of artists, creators, and writers. Our passion as creators is to bring our wildest dreams to life through our deep-rooted stories and eye-catching visuals. Join us on our exciting journey to build a universe unlike anything you’ve ever seen.

What is our Mission?

Our mission is to create stories through a diverse lens that appeals to all audiences, of all ages. Breaking boundaries, and stereotypes. Daring to be different.