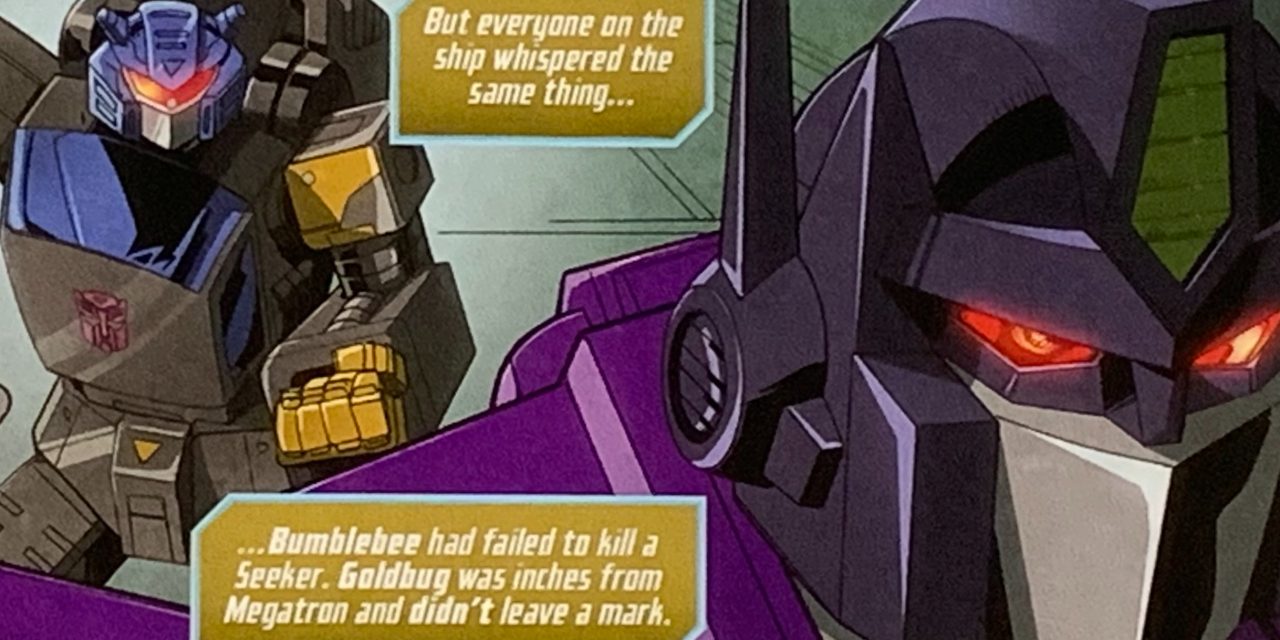 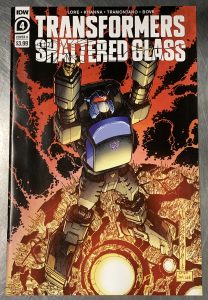 Book Description: In the first three issues of “Transformers: Shattered Glass,” we have learned that the Autobots won the war and earth and have all but completely eradicated the Decepticons from existence. Megatron, Starscream, and a small handful of others are all that remain.

The Autobots have control of Cybertron. In their list for power, they have split into three factions. There are those who choose to remain with Orion Pax (Optimus Prime). Some have chosen to follow Prowl. The remainder have sworn their allegiance to Goldbug (Bumblebee).

In the fourth issue, we get a new viewpoint, as Goldbug is the narrator for this installment. We go back and forth between the present and past. We get glimpses of how Goldbug was viewed and treated by Prime. Prime never took Goldbug seriously. That’s why Prowl was named second in command. Goldbug is only still alive because they had spare parts laying around. To Prime, he’s a joke.

In the present, we see that Goldbug’s forces have captured Starscream. Goldbug is desperate to get information out of Starscream and isn’t above using torture to gain intelligence. He wants Megatron. Moreover, he knows Starscream holds the secret to communicating with the Titan, Metroplex.

There’s a catch. Starscream’s ability to communicate with Metroplex is connected to his spark. If Starscream dies Goldbug won’t get the information he yearns for. How far is Goldbug willing to go to prove that he is not a joke?

As a child, I remember Bumblebee as an ambassador between the Autobots and humans. More often than not he’d be out doing his thing with Spike or Buster when the Decepticons would show up. Bumblebee would get pummeled a bit and limp back to Optimus Prime to report that there was trouble.

Bumblebee was never very good in a fight. We saw him get blown to pieces in the original G.I. Joe and the Transformers. Because following canon was never a strong suit of Transformers, we got to see it happen again with Devil’s Due and IDW.

As Goldbug he’s determined to prove to himself and others that he is capable in a fight and deserves respect. He is not a joke. He more than held his own against Skywarp and the Insecticons. I’m curious to see if he has the wherewithal to understand that there’s more to leadership than being good in a fight.

I’m still loving the change in color schemes for the Autobots. I find it incredible how the colors used can change a viewpoint on a character from a psychological perspective.

There are few characters where that color change is more profound than Goldbug. On this cover, he looks powerful and dominant. I liked how the letters in the title give the appearance of being shattered by Goldbug’s fists.

The interior artwork continues to be a dream for anyone that’s a fan of the franchise. The detail has been terrific. I especially liked seeing Bombshell and company for a few pages.

As we get further into “Transformers: Shattered Glass” it does nothing but rise on my personal list of best Transformers story arcs ever. As a geek on a budget, I’m telling anyone that will listen that this is a must-read series.