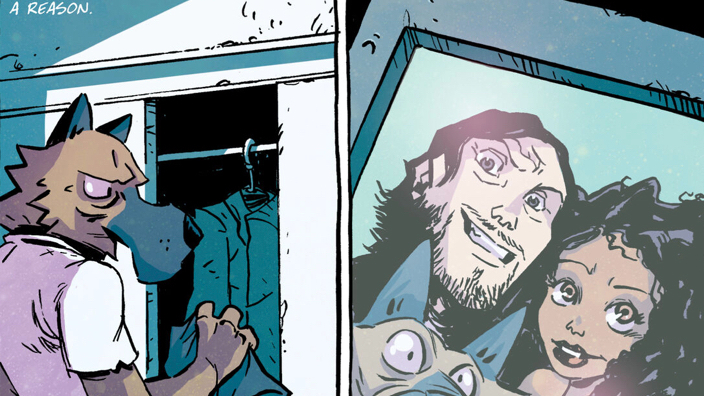 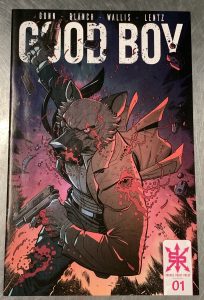 Book Description: Jon and his dog, Flint, were a mercenary team. They were two of the best black ops agents in the game. In fact, they were too good at it.

That’s why Jon retired. He wanted to get out of the game and live a normal life with his wife and dog. Someone took exception to that and had him killed for it.

Now Flint wants payback. He’s determined to be a good boy and avenge his master. He still has access to a large arsenal of weapons and can call in a few favors. Whether the bad guys like it or not, he’s back in the game.

“Good Boy” made its way onto my radar when it was getting ready to launch its Kickstarter campaign. Just from the premise, it promised to be intriguing. When I met Garrett Gunn at Rose City Comic-Con he told me a bit about the book. I picked up an ashcan copy as well as a couple of TPBs from his booth.

That conversation had me even more excited to receive my rewards for backing the campaign. I was ecstatic when news came out that the title was at the printers. Then there were issues with quality control and everything had to be redone. Eventually, copies of “Good Boy” were coming out in comic book stores across the nation.

Backers were upset. They were supposed to get the “sneak peek” at this book. To make it up to the backers, the good people at Source Point Press hooked physical backers up with the next two books. That, my friends, is how you take care of your customers!

I love how the artwork on the standard covers looks. It’s edgy, gritty, and makes you want to see what’s happening in this book.

The artwork on the interior pages is not quite as detailed as some of its contemporaries. When you see someone’s brains getting shot out from the back of their skull this isn’t necessarily a bad thing.

“Good Boy” was one of the most anticipated releases to come from a small press publisher in 2021. As a geek on a budget, I believe that it deserves the hype and was worth the wait. This series has a great foundation that leaves me eager to see what comes next.