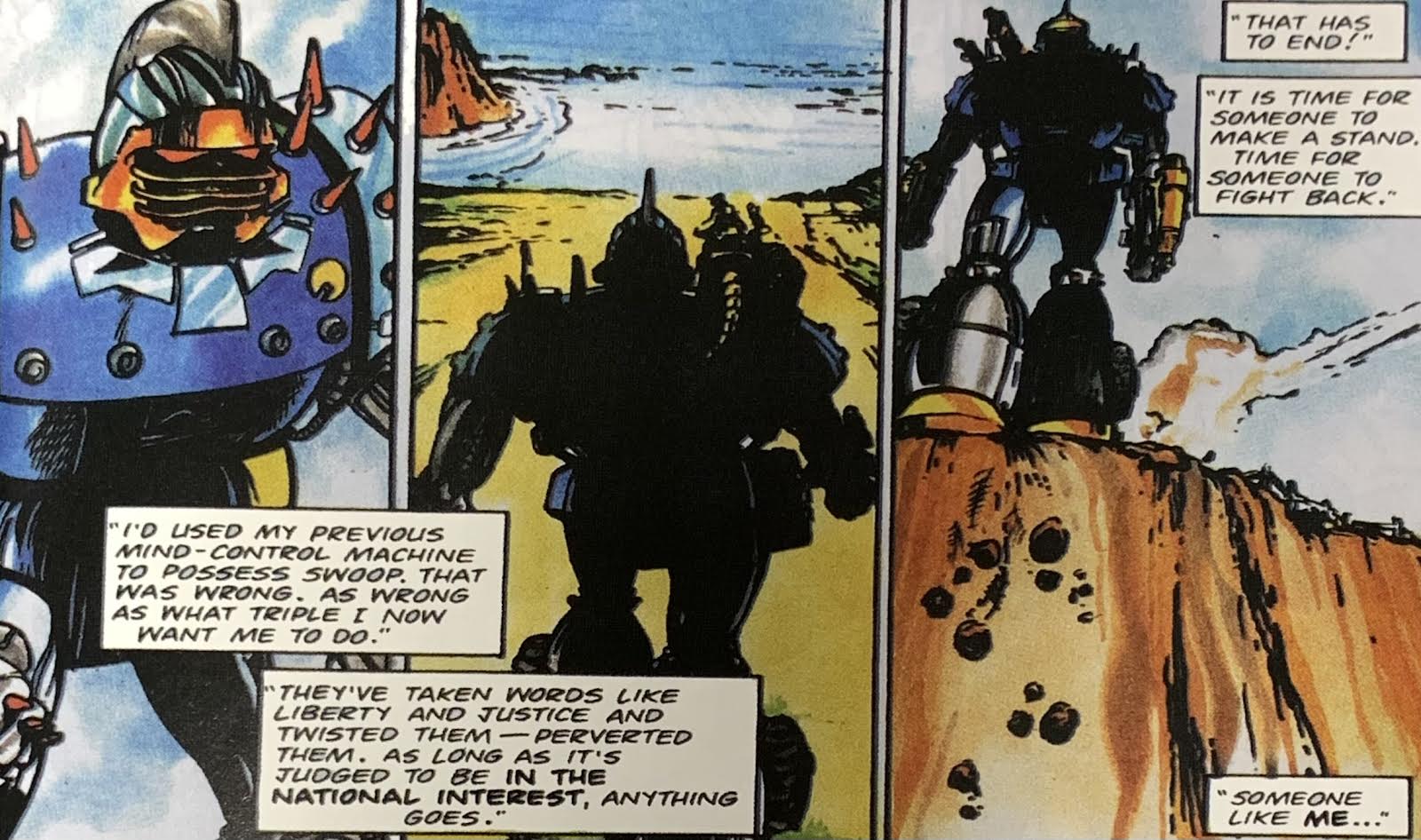 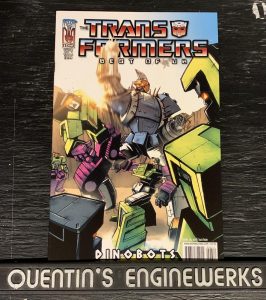 Book Description: “Transformers: Best of the UK: Dinobots” #6 is a reprint of two older issues in one book. The first story comes from Transformers: UK #77. It tells the tale of a man named Peter Anthony Morris. He was a professor in robotics. Now he’s taking up residence inside of a secret government weapon called “Centurion”. Centurion is a heavily armed robot that is approximately the same size as Megatron. It was designed to try to keep all of the Transformers at bay by allowing the user to have mind control over the machines. He has a flashback of the course of events that brought him to this point. A news reporter had revealed that a costumed character named “Robot Master”, someone created by a corporation to calm the public with regards to the giant robots on Earth, was a fraud. Morris’ first mission was to kidnap the reporter and silence the story. He saw the Decepticons and lost control. Rather than grabbing the reporter and her crew he engaged in battle with Megatron. While this was taking place, Swoop (a Dinobot) flew in and grabbed the crew. In the present Morris finds Megatron, Soundwave and the Constructicons battling. Megatron wants to know where the Robot Master is. Grimlock doesn’t know or care. The Constructicons make it clear that they intend to kill a group of humans. The Dinobots are taking lots of damage. Morris decides to join the fray. Will he be able to control himself and hold off that many Decepticons? The second story is a reprint of ”Transformers” #8. In this story the Decepticons have captured all of the Autobots except Ratchet. When Megatron finds Ratchet he makes a deal rather than destroying him. Shockwave has assumed command of the Decepticons. Megatron will trade the lives of all of the Autobots in exchange for Shockwave’s elimination. Ratchet has no choice but to accept the deal. Going through the Ark’s archives Ratchet finds out the Dinobots originally defeated Shockwave, but how? More importantly can he find them after millions of years?

I didn’t know a “Transformers: UK” existed until I found this book in an antique store. Now I have a whole new series to hunt down! From what I saw it’s all G1 (original line) with parallels and tie ins to the original Marvel series.

I loved the theme of the first story. Liberty and freedom for all means just that, not whatever liberties and freedoms are convenient for “national security”. While we don’t spend a lot of time with him, Morris is a very relatable character. I did find it surprising to see Soundwave as a voice of reason. It was a nice change.

The second story is a reprint of one of my favorite issues as a child. It contains the first “official” appearance of the Dinobots. This book sent my mother and I on a quest through every toy department in Anchorage looking for Grimlock and company.

I liked how it teaches us about bravery. Ratchet knew that what he did could kill him; but he did it anyway. This was not something one would expect from a medic.

With the Constructicons and Dinobots on the cover I was instantly sold on this book. 8 year old me was stoked to finally see two of my favorites throwing down. I was mildly disappointed that the Constructicons didn’t combine to form Devastator in the fight. One of these days I will find this fight in a book.

The interior artwork is very good for the era it comes from. Unfortunately technology hadn’t quite gotten to where it is now. The paper it’s printed on received an upgrade, but the original artwork didn’t get any retouching.

As a geek on a budget this one is tough to call. I caught a great sale and spent less than $3 so I was thrilled. The cheapest one I found on eBay started around $12. It is two stories; but that’s still a little steep.

My recommendation would be to go with digital copies from ComiXology. “Transformers: UK” #77 is only available in a collection that runs about $16. That collection gives you 293 pages of content though. You can get the individual issue of “Transformers” #8 digitally for about $1. That beats paying collector prices for a key issue.