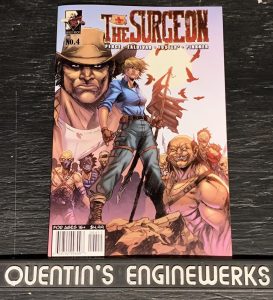 Book Description: In the third installment of “The Surgeon” we saw Hanover and the people of Turtle Island were in a conundrum. They had driven the Hot Animal Machines back and kept them from advancing into the city. This came at a great expense. The Hot Animal Machines have put Turtle Island under siege. No supplies can get in. Livestock is milling around in the streets defecating wherever they happen to be when the urge strikes. The threat of a Cholera outbreak is becoming a real thing. There is a remedy to this problem. The Hot Animal Machines love their opioids. Turtle Island has a plethora of them on hand. The plan is to give the Hot Animal Machines a box filled with them in exchange for forgoing the blockade, leaving, and never returning. The people of Turtle Island can’t trust a group of junkies that have no scruples to keep their word. To ensure that the problem doesn’t persist they have literally put a poison pill in this deal by spiking the opioids with poison. The issue wraps up with Hanover delivering the opioids to the Hot Animal Machines. In issue number four of “The Surgeon” we go back in time by about twelve hours. We see that Turtle Island’s Master at Arms, Dave Rogers, has his own problems. As it so happens, he’s addicted to opioids. He’s a highly functioning addict; but an addict nonetheless. Rogers helped himself to some of the bottles that were intended for the Hot Animal Machines. He then did some self medicating to recover from injuries in the battle at Turtle Island. He didn’t know they were poisoned. Now Hanover is in a desperate fight to keep Rogers alive while cleaning up the aftermath of the Hot Animal Machines utilizing their care package. When the First Nations United appears things take an unexpected turn.

I love that John Pence isn’t afraid to talk about drug problems in this issue. I’ve seen firsthand how drugs can destroy lives. I’ve watched someone go from being among the biggest players in the game on Wall Street to homeless and dying. All because they wanted that next fix. I’m all for a story that helps put a face with the troubles addiction can create.

If you or someone you know is struggling with addiction you can get help at:

The character development of Jenny Hanover in the series has been outstanding. The prequel novella we get makes her even more memorable. We get to see what happened when the world went to hell and how she did everything that she could to ensure those she cared about were taken care of.

The artwork on the cover is incredibly detailed. I like that we get to see most of the key characters from this issue on it.  We don’t know much about Chuck Long yet; but I suspect that’s going to change with the next issue.

The interior artwork continues to be very impressive. The lines remind me a lot of Jim Lee’s work. The notable difference being the work of the colorists. In “The Surgeon” the colors are rich and seem to pop off of the page. Collectively it pulls the reader deep into the story and leaves them surprised when they have reached the end of the book.

“The Surgeon” has become one of my personal favorite small press publishing titles. It checks all of the boxes. Good character development. Good plot. Good artwork. Best of all, the publishers look out for a geek on a budget. You can get in on this series for as little as 99 cents for a digital copy of the first issue. Most of us have that on the floorboard of our car underneath the driver’s seat.

To get caught up on all the happenings in “The Surgeon” go to:

REVIEW: Blood Pudding And Other Such Delights #1
REVIEW: The Land That Time Forgot: Fearless #1
Sponsor