In late summer, 2020 I saw a post on social media for Bryan Silvebax’s “Scarface” variant cover for a book called “The Recount” that would be released in December. I was all over that first issue because the cover had my curiosity piqued. After reading that first issue, I was telling anybody that would listen that this story has teeth.

The first two issues of “The Recount” we have seen the President of the United States assassinated. With the exception of the Vice President, who is now President, anyone who is of remote significance to one political party has been neutralized. We have seen the country begin to tear itself apart because of votes casted for different candidates in the previous presidential election.

In issue #3 President McDearmon and Agent Barto have managed to maneuver their way through the countryside to get into the fortress that is the White House. Now that they have reached the safety offered by the White House they must determine which members of the Secret Service in the building can be trusted.

The leader of the terrorist group called The Masses (whom I call Clown Mask 1 because I won’t throw out a major spoiler) and his assistant, Kannan are preparing for the next phase in this uprising. We get to see Kannan’s team of specialists as they prepare for battle. We get to see members of The Masses pour gasoline on the fire. We also get to see that while Clown Mask 1 is doubling down on a victory, Kannan may be the one who truly holds all the cards.

The stakes in the story seemed to double down in this issue. Gabriel Ibarra-Nunez’s artwork for “The Recount” #3 is seeing that bet and raising. From the protests to being introduced to Kannan’s team and everything in between the work is nothing short of captivating.

“Is this the real life? Is this just fantasy?” The reader can’t help hearing Freddie Mercury’s voice ask those questions as we move through this story. This story has boldly taken us off grid because it is frighteningly realistic. I have come to the conclusion that Jonathan Hedrick is either a literary genius or a clear and present danger to the president and national security. From what I’ve read he may be both. Time will tell.

The dialogue continues to leave us shocked from the information we get. It demonstrates just how quickly Americans will believe propaganda and turn on each other. It tells us how deeply The Masses are entrenched. It leaves us wondering if there’s any hope for survival as a nation.

The lettering is maintaining it’s perfection. The story continues to follow its canon. Even though it does not drastically affect the story I would still like some editor’s notes giving us a better idea of where in the country things are taking place.

A reader coming into this story without any prior knowledge can still navigate these waters quite easily. If you are already familiar with the premise of this story I advise you buckle up. You’re in for a treat!

This book was on my short list for most anticipated books to come out this month. It certainly did not disappoint. I would strongly recommend getting out there and getting your copy before shops sell ou 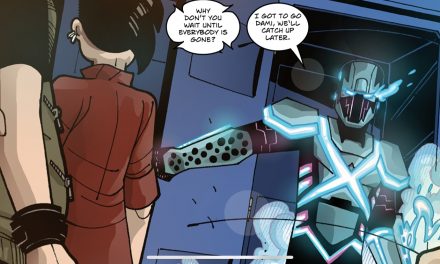 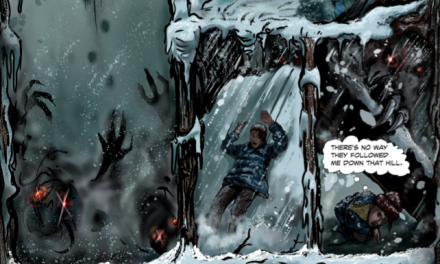 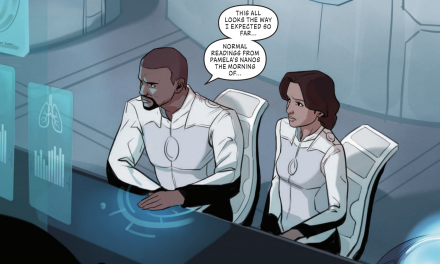