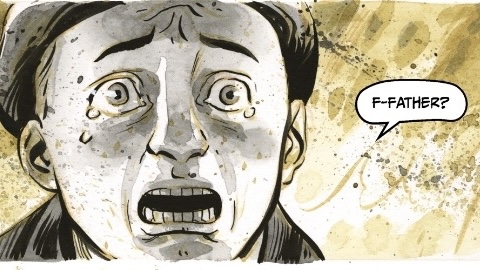 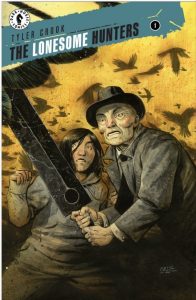 Book Description: From Russ Manning Award-winning and Eisner-nominated Harrow County cocreator Tyler Crook comes this supernatural fantasy about loss, power, and destiny. An old and out-of-practice monster hunter in hiding crosses paths with a young girl that forces him to confront these chaotic creatures. As the beasts invade their tenement, they set off on a supernatural road trip to stop these ancient evils in a story that explores the ways that youth informs adulthood and how early traumas can haunt us in old age.

Mystical, occult, redemptive, and it’s just the first issue. The Lonesome Hunters #1 by Tyler Crook sets the stage for an exciting comic series. Fate finds two loners, one elderly gentleman and the other a young girl, fighting demons in the present and from their past.

The story is phenomenal. Almost perfect. It covers a lot of ground at a pace that matches the attention span of today’s audience without sacrificing character development. We get a good sense of the characters and enough of their history to make the current events make sense. Every panel moves the story forward or showcases something that builds the characters or the world.

The art style will look familiar to anyone who has read the Harrow County series. Tyler was the artist for that comic and used a similar fashion of art in Lonesome Hunters. It looks like an era from the past, even when the story is in the present. The subdued color palette adds to the ambiance and works with the story Tyler is telling us.

The cover art looks just as good as the inside work. It feels like a panel. Definitely sums up the concept of the book well. It’s playing off of Tyler Crook’s name recognition. And I’m not sure without it how compelling it would be. The tone matches the comic. It works well enough.

The dialogue is another strong point of the comic. A consistent character voice that feels like the narrator is talking to you. There were a few awkward phrases that didn’t seem consistent with the set tone. Nothing that takes away from the book in any way.

This first issue of The Lonesome Hunter does everything you could want from a great book. It sets the stage for an exciting world of people you want to know more about. With just enough about the past to make the future, we don’t know, compelling. I would highly recommend reading this book. You will enjoy the journey.