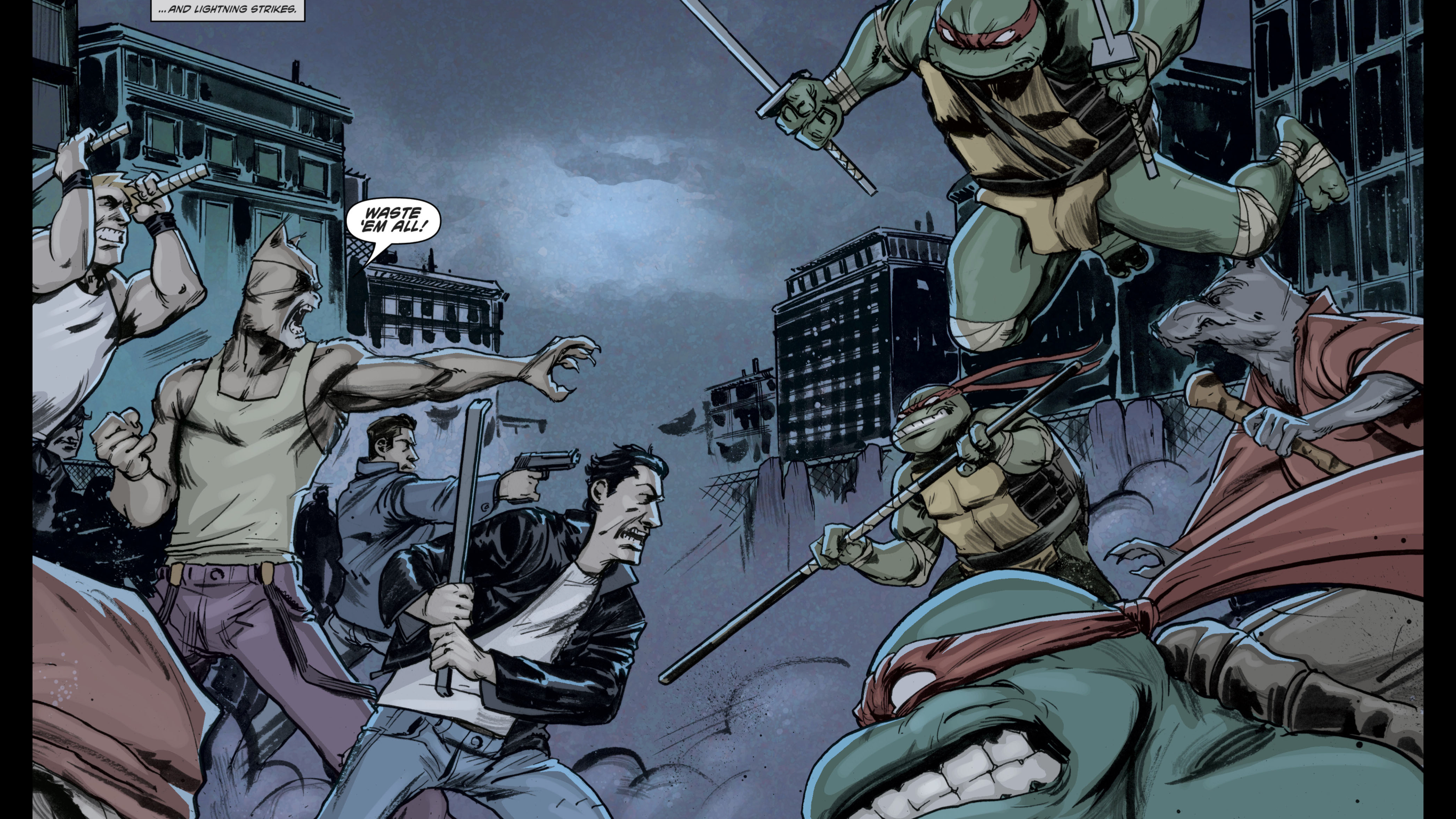 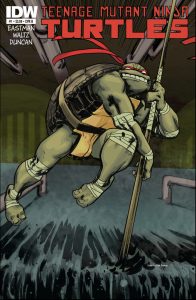 Book Description: The story starts off in an alley as we find the hero’s and their mentor splinter in what appears to be a back alley fight, after the dust settles the hero’s and Mentor are left standing with the instigator running off crying revenge. Once the battle is finished, the group speaks of heading home. The next panel is of a single turtle, mask, and weaponless wandering the streets.

After the first set of panels with the hero’s, we are introduced to a flashback to an unknown lab where we are introduced into the origins of this Splinter and the turtles. At this stage in the story Splinter and the turtles are merely unmutated animals. It is during the start of this flashback that we meet April O’Neil and Chet Allen, as they discuss the purpose of the animals, though Chet seems to be vague of the true purpose. Next on the scene is Doctor Stockman who is revealed to be the head of this lab and working for General Krang, while on the phone with Krang we discover that Doctor Stockman is being paid to do specific research for General Krang. After that conversation, we are introduced back to April and Chet, only at this point more time has passed and we are introduced to someone named Lyndsey who mentions how Splinter got his name. Chet quickly indicates that Lindsay should not say anything and changes the subject to having April naming the turtles. This is where we learn how the 4 heroes got their given names.

At this point we go back to the original part of the story with the lone turtle, only this time he appears to be scavenging for food, makes a comment about a garment, and hears an argument that he goes to investigate, the argument seems to be between father and son. The unnamed turtle breaks in and the book ends there.

Teenage Mutant Ninja Turtles, the very name brings back great memories of toys, cartoons, and childhood adventures.  I remember when the show was first introduced, and then the first movie came out in 1990.  This was a live-action movie of part of my childhood and it was great, like the cartoons and comics there was a whole slew of toys that went with the movies, now not all the movies were great, and the first sequel had to change tactics due to how kids where mimicking their heroes in school settings.  Which added to both the cheesiness of the movie and to the comedy relief.  Needless to say, I was a fan.  So every time there is a new take I am a little cautious as it always comes across as changing or retconning my childhood.  That said when I saw this book my first thought was this should be good.

The story itself starts off like any other turtle encounter, Our heroes stop another villain from trying to take over some part of town, there is an ensuing battle where the turtles win with the guidance of Splinter.  That stuff is canon, after all, the turtles always win right!? Also, cannon is the classic Raphael troubled warrior Schtick.  In every movie, series, and comic that I have read Raphael is almost always the outsider and has issues adjusting to something.  Only in this issue do we see that Splinter tears up and mentions his name after the battle, but it is honestly assumed the unmasked, weaponless turtle we see outside of the flashbacks, is actually him.  The origin part of the story that is revealed in the flashbacks is different this time.  Classic cannon has April O’Neil to be an ace reporter who is saved and befriended by the turtles.  This book has that not to be the case, while the turtles and Splinter are science lab animals to be certain, how they become mutated seems to have been changed, and for the better, I think.  Before it was one of those things that just happened, this story seems to have taken that concept and flipped it on its head, and made it a side effect of something else that was happening to them.  I feel that added a proper back story and explanation to a great fantasy world, making it better than just a Saturday morning cartoon.

The interior artwork is phenomenal!  It matches the cover perfectly and is reminiscent of the original comics, which could be due in part to the fact that one of the original creators helped write this book.  As I read the story I could see the emotions that all the characters were going through at the time they went through them, which always makes the story more relatable and enjoyable!  It has a gritty edge to it that makes it more realistic, instead of the cartoonish feel that I have seen others portray.  The artwork mixed with the wonderful story is going to make this something that will always be truly enjoyed.

I look forward to seeing how the version of the story plays out, as the story mixed with the artwork makes this an adventure not to be missed!