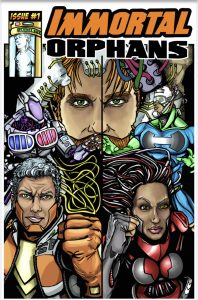 Book Description: Immortal Orphans begins in the year 2420 with the human race on the brink of extinction. Planet Earth’s surface is no longer inhabitable. As a result, four impromptu hive cities were built far beneath the surface. Only one, Delta Hive, remains.

When we delve deeper into the city, we meet Gannon. He’s one of the garbage men responsible for ensuring everything possible is recycled. In an underground city, some materials are difficult to come by.

Currently, Gannon is trying to outrun a Cycop (cyborg police officer) because he stole some beer. After some verbal sparring and a brief fight, Gannon is detained. It seems he’s been chosen for a special project.

We then travel back to 2220 where we find ourselves at a Hell-Hole. Hell-Holes are what is being used for waste disposal. From what I can tell, there are pits that go down to the Earth’s core and trash is incinerated there when it finishes its plunge.

This particular Hell-Hole is owned by Durand Corp. Durand Corp. is a cutting-edge genetics company. It is owned by the country’s beloved leader, Julian Durand. We see a couple of Durand employees sending people that in cryosleep down the Hell-Hole.

A man named Quinn is watching them with us. He can’t abide by what they are doing and comes out of hiding to put a stop to it. A scuffle ensues. By the time Quinn is victorious, he’s only able to save one tube. The tube’s occupant is Science Boy from the children’s show ”Uber-Buber Wonder Town”. Now Quinn must decide what to do with the child when he thaws out.

We then take a trip to Julian Durand’s home where we learn that he is trying to unlock the secrets of immortality. We also see he has some secrets.

His son, Hernia Man lives his life like a dog. He has a bed that resembles a nest and is harnessed with a chain and collar. Hernia Man was once the world’s first superhero. Now he can barely speak. Durand’s daughter, Liberty, has had enough of her father’s exploits and is leaving, even if she has to fight her way out.

We then go back to Delta Hive where we see a portal of sorts. Scientists believe this portal allows people to travel back in time. Everyone that man has looked upon as a god has been through this portal at some point. Panning the room we see Gannon again. He’s been injected with shots containing various nanotechnology. He’s being tasked by Liberty to go back in time to stop the extinction of humanity.

With the first issue of a series, creators have the difficult task of establishing the holy trinity of storytelling: Plot, setting, and character development. What makes this task so difficult is they have about 22 pages to make it happen.

Mr. Mann does a phenomenal job of establishing the setting from the onset. We instantly know we’re in the future and below the Earth’s surface. Whenever we change locations we have an editor’s note telling us where we are now.

Character development can be a bit tricky. After the first issue, I feel I have a grasp on who Liberty is. I don’t know Gannon and Quinn quite as well. Part of me suspects they’re the same person at different points in the timeline.

The plot is the meat and potatoes of the trinity. We may or may not remember every character in every story we’ve read, but we’ll certainly remember the story. Immortal Orphans gets us into the plot right away by telling us the situation humanity is in. We do take a scenic tour to get to where we begin to understand what’s happening. That’s not unusual. Some storytellers have made a career of doing that.

This cover has a lot of information on it. We can see five characters which I like. The way the layout was done makes it somewhat difficult to focus on any one character though. Even so, there’s enough here to catch people’s attention and pique curiosity.

The interior artwork covers the gambit. From tech to humans to mutants (I’m not sure what else to call Latex) this one has it all. The tech is very well done, especially on the first page. Along with the editor’s notes, it sets the tone for the story. I also appreciated the detail on Quinn and his weapon.

As a geek on a budget, I believe that at $2.00 this story is well worth the price of admission. It has a great premise, likable characters, and some fun puns along the way.

You can get your digital copy of Immortal Orphans #1 through: