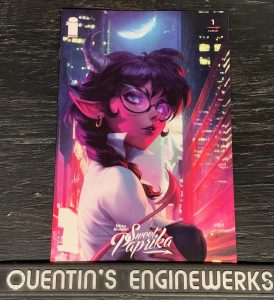 Book Description: Sweet Paprika is The Devil Wears Prada, Sex and the City, and Bridget Jones’s Diary all rolled into one. It’s the tale of Paprika, the Chief Creative Officer, for a large publishing house in New York. While she is at work Paprika is one of the most powerful women in New York. Once she leaves the office it’s a different story. The treatment Paprika received from her father as a child has left her emotionally scarred. Paprika has only had one romantic relationship in her lifetime and it didn’t go well. Her father put such a taboo on anything sexual that even when she’s flying solo she feels ashamed and has to ground the plane. There’s a mail delivery guy at the office who’s aptly named Dill Do. The ladies all seem to love him. From what I can see he’s loved quite a few of them. Paprika is finding herself having fantasies about Dill. Could Dill Do hold the key to unlocking her desires or will any involvement with him lead to abject failure?

I first became familiar with Mirka Andolfo’s work when I read Unnatural. It was a hard hitting social commentary that had moments of whimsy in it. I thought Unnatural was terrific.

When Mirka Andolfo put out Un/Sacred I scooped it right up. The plot line in that title was a little thin. What it lacked in plot it more than made up for in laughs. Mercy was a bit harder for me to get into.

When I saw some of the first sketches from Sweet Paprika I made it a point to get it added to my pull list. I was very eager to see what Andolfo and company had in store for us.

Sweet Paprika is a nice blend of the previous three titles. It has the laughs that we had with Un/Sacred.  We get a strong female lead like we had with Unnatural. We also get hints of something dark like we had in Mercy.

The character development is outstanding. Paprika is a very sympathetic character. In business she’s taking the world by storm. She just needs to work on life when she’s off the clock. After one issue I feel like I know her very well. In fact she reminds me a lot of someone I know.

I really liked how this cover is done. It reminds me of what you’d see on the cover of People Magazine with their 30 people under 30 to watch. It’s detailed, vivid, and shows how strong Paprika is.

The interior artwork is solid. It meshes nicely with the story. The way Paprika is depicted when something is wrong with her coffee made me chuckle.

As a geek on a budget I feel Sweet Paprika is definitely worth the price of admission. The long wait for this one to hit the local comic book store wasn’t a fruitless endeavor. I think we can expect great things from this series.