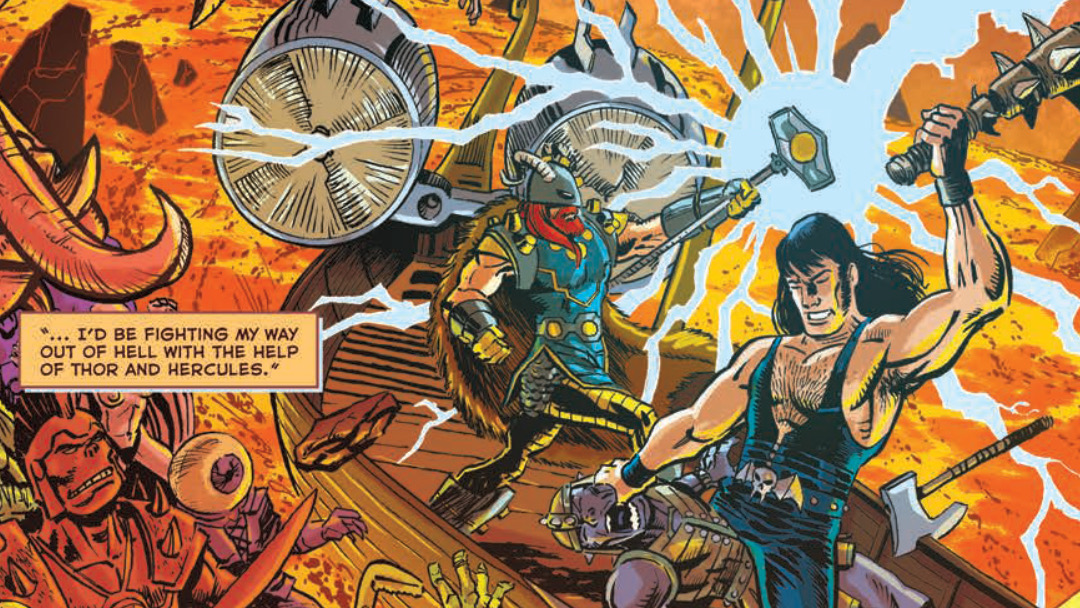 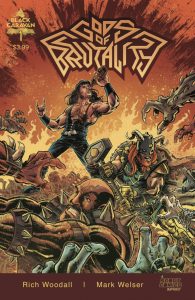 Book Description: After dying in a drunken drug fuelled car crash, heavy metal rocker Nick is sent to the depths of hell where he is tortured by hungry sex crazed demons. In a last-ditch effort to escape, he prays to whatever gods would listen to him. Hercules and Thor are sent to rescue the trapped rocker and together the three of them must escape hell and keep rocking.

After seeing the epic cover to Gods of Brutality, I had to give it a read. As an 80’s metal fan who loves Greek and Norse mythology this cover was ticking all the right boxes and my excitement level was high. I went in thinking this is going to be non-stop ride with carnage every page – It wasn’t quite the case. Sadly, the comic falls victim to a heavy expositional first issue where it takes most of the comic to set the story up. Once the expositional entrée is over it really digs into the meaty main course where the comic shines.

Gods of Brutality is structured around Nick an aged rocker at the end of his career sitting down for one final interview before he retirees. In this interview he speaks of his momentary death in which he went to hell, some 30 odd years ago which inspired the music of his career. For me structuring the story as a flashback takes most of the stakes out of it. Knowing that Nick survives his trip to hell and has a long and glorious career afterwards, dampens the ride, making the rest of the comic feel like I was just waiting for certain plot points to fall into place. As the Gods of Brutality continues, I have a feeling everything may not be as it seems and things will change, but as a stand-alone issue it feels very low stakes.

The dialogue and with that the humour is very much a satire of the stereotypical glam metal rockers of that time with constant references to partying and sex. Much like the lifestyle it spoofs the humour is a bit one note. Most characters make similar quips which are usually some form of a dick joke, which tire quickly. This similar style of writing between characters makes men, gods and demons indistinguishable at times.

The art on the other head is amazing. Mark Welser’s art on the cover and interiors is beautiful and is personally some of the most enjoyable comic book art I have seen in a long time.

If you’re a fan of heavy metal, Greek or Norse mythology or just a good time, Gods of Brutality is worth a read but maybe once a few more issues are out. Nick, Hercules and Thor are in for a wild ride in hell and I for one, am curious to see out what happens.