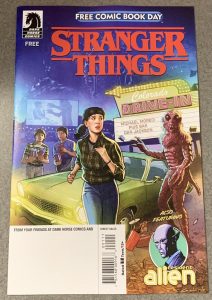 Book Description: In the 2022 Free Comic Book Day edition of “Stranger Things” we get two stories. One is a short from the title. The other is from “Resident Alien”. The first story, entitled “Creature Feature” takes place after the third season of “Stranger Things”. It focuses on three of our favorite characters from Hawkins, Indiana: Will, Jonathan, and El. They are making a pit stop in Colorado on their trek from Indiana to California. While Joyce is at the hotel resting, the others go to a drive-in movie. It’s a double feature with a couple of monster movies. Here we see how Will and El have adjusted to everything that has transpired to their time in Hawkins. The second story, entitled “The Ghost”, takes place just after the third book of “Resident Alien”. Harry is making a house call on Myrtle. She’s an elderly woman that had a dizzy spell and fainted. Her neighbor Ivy found her on the floor and called Harry. According to rumors, Myrtle’s home is haunted. She and Harry discuss it briefly while he examines her. Myrtle explains the random noises in the attic are probably squirrels that found a way into the house. Upon completing the exam, Myrtle tells Harry to show himself out. A few weeks later there’s a thunderstorm. It knocks out the power in Myrtle’s home. She calls Harry over because of a noise in the attic. At long last we learn what the source of the noise has been all along.

With season four of “Stranger Things” coming down the pike later this month this was the perfect time to have this book come out. It doesn’t give away anything from the upcoming season; but it keeps us up to date on people’s psyches.

Between what happened to Will, losing Bob, and losing Hopper clearly Joyce needed to get away from Hawkins and make a fresh start. The woman is emotionally spent.

It’s no surprise El is having trouble adjusting. Life at the Hawkins Lab was never ending torture sessions. Coupled with multiple encounters with the Demogorgons, she’s endured more than any child should have to. She will be seeing ghosts for quite some time.

Will shows wisdom beyond his years. He went through Hell and back and has a very rational approach to the situation. By refusing to let the bad things that happened ruin the things he loves, the bad things can’t win.

I’m not very familiar with “Resident Alien”. My buddy, Lord Trekker, has talked about how much he enjoyed the show. It was on my list of things to check out; but there weren’t enough hours in the day.

I’d be lying if I said I had enough to go on to make an informed opinion. From what I can tell, “Resident Alien” seems to have an interesting premise. This story did move the franchise up on my list of priorities.

The cover doesn’t necessarily jump out and scream, “Notice me!”. I liked that it is relevant to the story. We get a bit of nostalgia with the setting. The way names of some of the people in the creative team were in the marquee was very innovative.

One of the hardest things in comics is to have an accurate likeness to an actress or actor in every single panel. Bak does a solid job of accomplishing this. I especially liked the portrayals of El at the souvenir stands.

One of the most magical things about Free Comic Book Day is how we get glimpses of upcoming stories and exposure to something we may not be as familiar with. As a geek on a budget I’m all in on any book you get from that wonderful day. Free is a great price to get the chance to go on a curiosity voyage. I highly recommend doing so with this book.