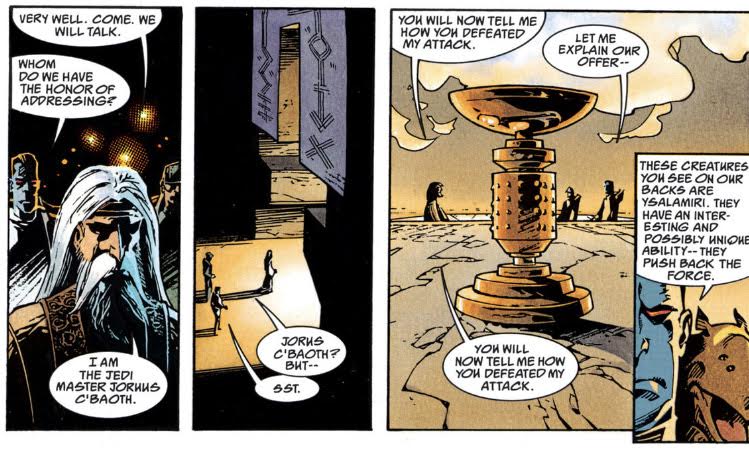 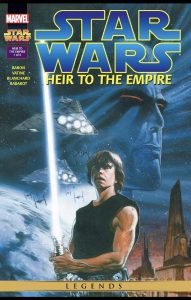 Book Description: “Star Wars: Heir to the Empire” begins five years after the second Death Star was destroyed. The Rebel Alliance has spent these five years reestablishing a Galactic Republic. Han and Leia are married. She’s pregnant with twins. In the minds of most he war is over. However, in the farthest reaches of the galaxy part of the Empire remains. One of the Emperor’s warlords, Grand Admiral Thrawn, is gathering troops, equipment, and intelligence as he prepares to lay waste to the new republic before it can get stabilized. His first move is to take out the republic’s fleet in the Obroa-Skai. Soon thereafter Thrawn goes to Mount Tantiss, where the Emperor kept his personal storehouse. The Emperor’s treasures are guarded by a dark Jedi Master named Jorhhs C’Baoth. Rather than fighting for the contents of the Emperor’s cache Thrawn offers a deal: unlimited access to the contents of the storehouse in exchange for Luke Skywalker and Leia Organa Solo.

While “Star Wars” is on my Mount Rushmore of fandoms, I am not as familiar with stories that take place outside the scope of time between episodes one and six. I saw reading the “Heir to the Empire” series as an opportunity to expand my knowledge of everything in a galaxy far, far away.

I finally got around to reading it 26 years after it was originally published by Dark Horse. This one came over to Marvel when Disney bought “Star Wars”. It was originally an indie book so I’m grandfathering this series in.

This book is the first appearance of Grand Admiral Thrawn. My first impression of him is that he’s a force to be reckoned with. Thrawn is very intelligent, cold, calculating, and knows how to guarantee he gets what he wants. One feels sorry for the poor soul that tries to oppose him.

This book also features the first appearance of Mara Jade. We don’t see as much of her in this issue. From what we do see it’s clear she is a quick study that’s handy in a fight.

The cover artwork on this issue is very intriguing. Featuring a new character like Grand Admiral Thrawn on the cover instantly makes fans want it to learn more. I was especially fond of how Luke was portrayed.

The interior artwork fell victim to the technology of the time. In this book lines aren’t as thin as crisp as they are in its modern contemporaries. We also have a deviation from what we’re acustomed to in the portrayal of some characters, most notably in Han.

This book doesn’t flow as smoothly as I would have liked. When we jump from location to location we don’t get editor’s notes telling us where we’ve relocated to.

As I mentioned earlier, this book has the first appearance of two key players in the “Star Wars” universe. You will be looking at collector’s prices for a physical copy. Right now that’s starting at around $90.00 on eBay for a reprint that came with a toy.

My recommendation as a geek on a budget is to get the digital copy. For $2.00 you too, can see just how dangerous Grand Admiral Thrawn is.