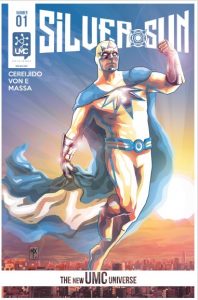 Book Description: UMC Ediciones are an Argentinian based graphic novel publisher established in 2013 with a range of superhero titles, Silver Sun being one of the principle characters. UMC’s aim for their stable is to generate their own collection of South American based superheroes whose stories will be covered in their publications. Silver Sun wears the colours of the Argentine flag as part of his uniform and the flag itself as a cloak. He defends the democracy and security of his country whilst at the same time seeking to uncover his past and origins, which he does not remember. The action opens with a bank robbery in progress and Silver Sun getting a tip off from a police call handler so that he intercepts the robbers as they make their getaway. His panoply of skills are on full display as he overcomes the robbers and hands them over to the police. We get an overview of another mixed day of activity before a night-time patrol leads Silver Sun into contact with two supervillains who form the antagonists in this volume. Through the action that leads to a wounded Silver Sun overcoming the two supervillains and arresting one of them we get a hint that there has been past interactions between them and things were not as clear-cut as Silver Sun would have hoped for. This is even more troubling to our superhero due to his memory loss about his past. As Silver Sun is having his wounds dressed following his battle with the supervillains, the arrested supervillain, Bestia, is sprung from his high security cell by a new member of The Horde, the supervillain group intent on taking Silver Sun down. This sets up volume two nicely for the action to develop.

The story started as a ‘day in the life’ of a typical superherotype scenario where a uniformed supe is using his powers; strength, flying, fire fists and regenerative powers are on show so far, to overcome bad guys and rescue civilians in trouble. Itdoes however manage to get across the ‘local’ flavour that UMC Ediciones are trying to capture.

There are subtle and somewhat darker undertones to the character hinted at early on. Is he the only supe, are there more somewhere?  He is worried that he cannot remember his past and that though his existence appears very clear and clean cut he seems to have a sense of foreboding that his history is not so straightforward.

These elements lend the story a suggestion of additional depthand foreshadow Silver Sun’s more layered interaction with the supervillains.

The two supervillains introduced in volume one are in true supervillain character  a mix of cowardly and psychotic and what’s worse there seems friction between them but also more of them around ‘off screen’  for the moment.

The art is of a solid standard, colouring is nicely done and some of the action scenes very dramatic. The city is well set as a background to the action.

The cover art is very dramatic and clearly depicts Silver Sun as the stories focal point.

The dialogue has a nice irreverent quality to it as Silver Sun battles the bad guys however it does fall short  in parts where the translation from its native Spanish into English is a little clumsily done.  Translation, particularly of vernacular is not easy and though sometimes a few idiosyncrasies  by way of mistranslation can carry a certain charm it does stick out a bit in places and takes the reader’s attention away from the story .

Overall the characterization of the protagonist and antagonists are well delivered with hints at a greater depth than revealedin volume one and though the characters do not change throughout this volume there are clear pointers that change is coming.

I enjoyed volume one and look forward to seeing the storyline and characters develop further in the second volume.