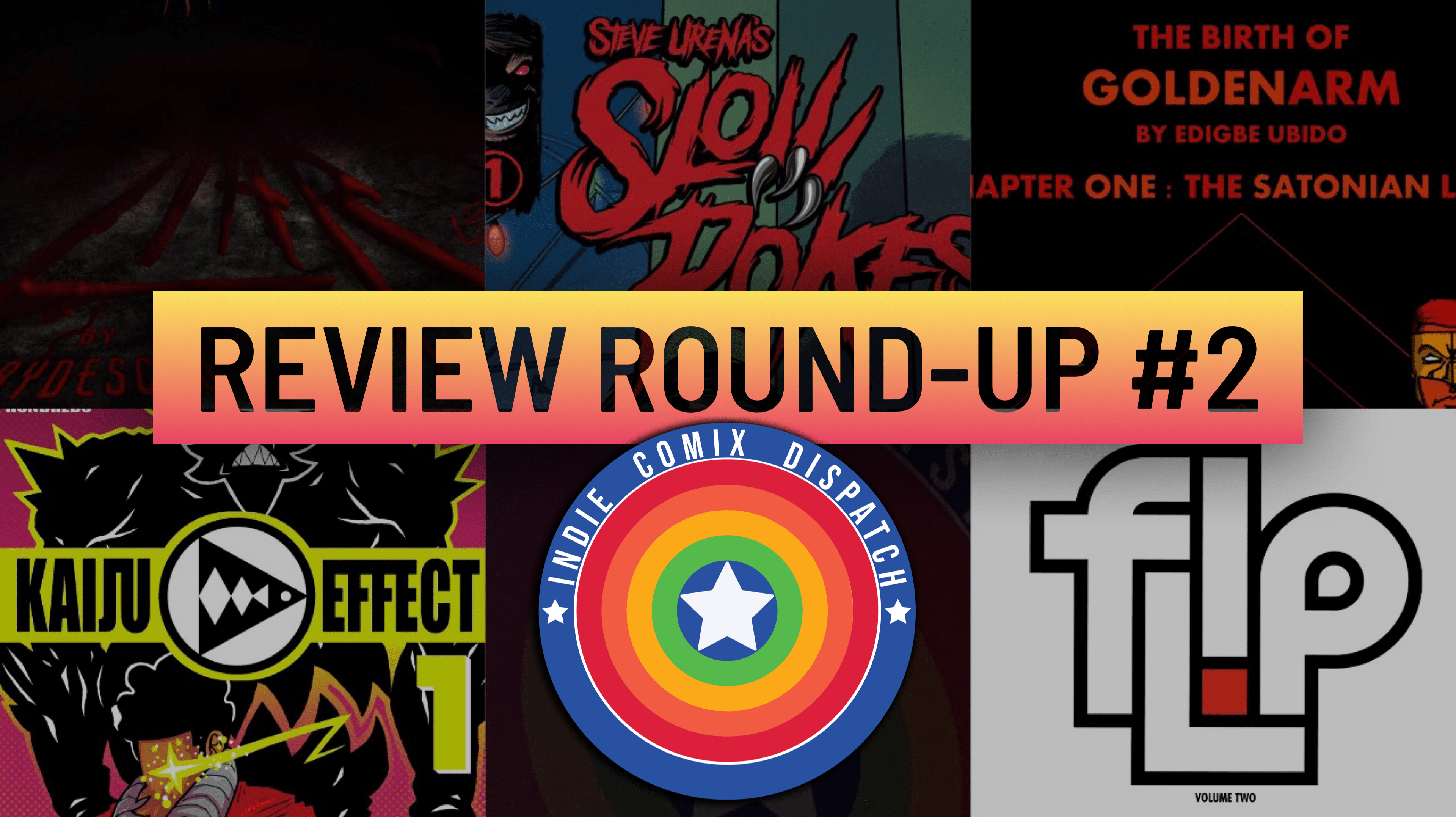 As a reminder, you can read more about our Review Round-up feature HERE.

Liar is a character who everyone should be scared of. Have you ever been lied to, and it ate at you? Do you despise liars? Liar is a character who feeds off your lies and will leave you trembling in fear because he’s lurking inside everyone… you never know who is telling lies until it’s you and the mask is off. People should be terrified of liars. You never know who’s telling the truth.

This first issue of Liar feels like the sort of tale that would be told around a campfire to scare children! If you’re looking for happy endings, this is certainly not the book for you! The issue is short on details on Liar, and I want to know more about this terrifying character. I hope to see more in the future and hear more tales… but maybe not right before bed.

Slow Pokes is a 20-page one-shot comic book that answers the question: What would happen if Sloths became fast? They would be killing machines, of course! Written by Steve Urena and drawn by Juan Romera, this Sloth horror-comedy is a labor of love and my homage to the ridiculous horror movies I used to see on the shelves of Blockbuster when I was a kid.

Urena hit the nail on the head! This book reads exactly like a cheesy horror film, which is right up my alley! This may not be everyone’s cup of tea, but if you like watching late-night B horror films, you’ll enjoy Slow Pokes! Just don’t jump into this book taking it too seriously; it’s not that kind of read. I hope to see more one-shots like this from Urena, and maybe, just maybe, an eventual crossover!

The Birth of Golden Arm

‘The Birth of Goldenarm’ is a Sci-fi graphic novel about an alternate tale of the solar system we live in today. As aliens from all planets in the solar system are integrated into society, threats arise from beings more advanced than Earth can cope with. Frédéric Vornstryke is a half Earthling half Satonian (Saturn) who, at a young age, witnessed the horror which these arising outlaws can inflict. This trauma sets him on a path to understand and battle these threats, to help protect those who can’t defend themselves, when a danger more significant than even he can manage threatens the entire solar system, the God of Saturn, Raikomi bonds with him, giving him powers beyond belief to put things right.

Chapter 1 of The Birth of Golden Arm drops Friday, 12/11! I read an advanced copy, and I have to say, it’s a surprisingly refreshing story! I hope to write a full review soon but wanted to inform ICD readers of this story before it drops. While the story isn’t revolutionizing comic books, it is still a fun concept with a unique story. I’m looking forward to continuing to read Birth of the Golden Arm as new chapters are released!

From Eisner & Shuster-nominated writer/editor Jack Briglio (DC’s Legion, Archie, Dominion Jack) and Markosia Press, Flip is a comics anthology of alternate reality stories and flipped worlds, real-world what-ifs going against convention, and speculative fiction that examines our world and turns it on its head.

I don’t know what else I could add to the above description! Flip is a fun anthology series that’s worth a read. Not every story in the book is a home run, but enough is going on to have something for everyone.

Flip: Volume 2 is available now through major retailers such as Bookshop, Barnes and Noble, Comixology, and Amazon.

Kaiju Effect is an ongoing series taking place in a world where humans and kaiju struggled to exist together. Eventually, when humans made significant leaps in technology, they began to destroy kaiju, so they learned how to hide in plain sight. The story is about a man named Tomy and his part in an organization called the KDF. I don’t want to give too much away!

Kaiju Effect has potential, and I can’t wait to see more. Issue one is only 18-pages, and I felt like I was missing a lot of the backstory. I’m hoping future issues will be longer and go a little more in-depth into this world. The concept of Kaiju hiding as humans is a unique one, and I’d love to see it further explored.