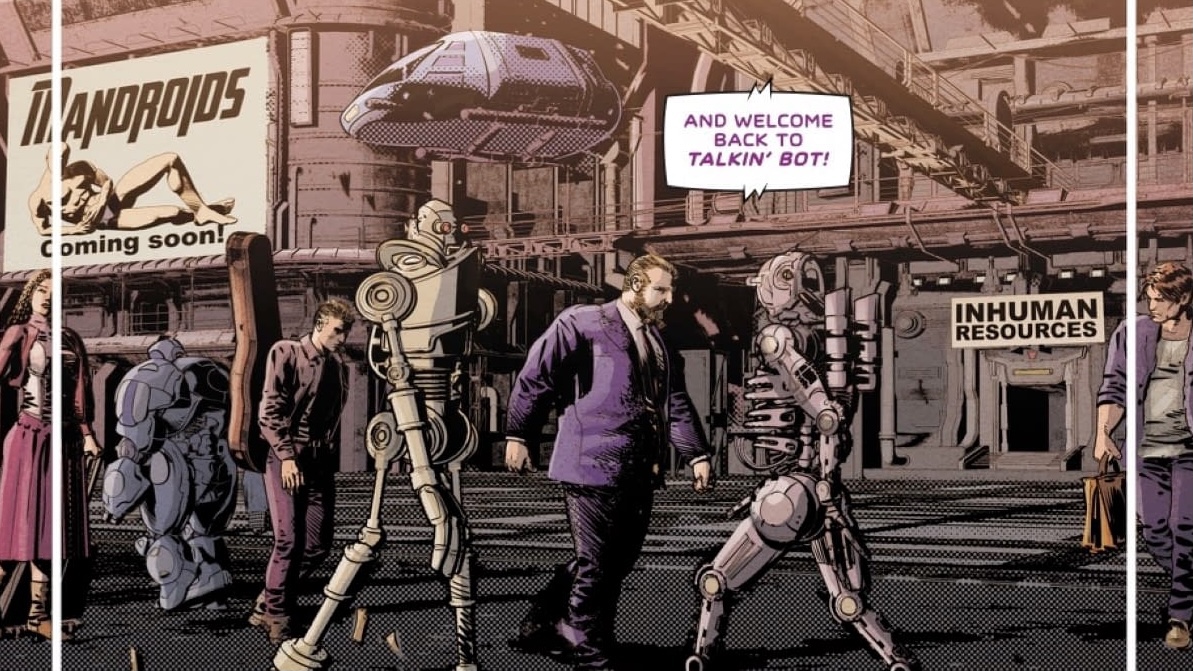 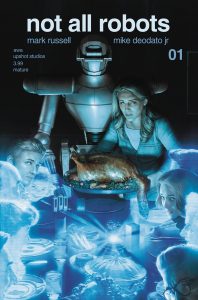 Book Title: Not All Robots #1

Book Description: In the year 2056, robots have replaced human beings in the workforce. An uneasy co-existence develops between the newly intelligent robots and the ten billion humans living on Earth. Every human family is assigned a robot upon whom they are completely reliant. What could possibly go wrong? Meet the Walters, a human family whose robot, Razorball, ominously spends his free time in the garage working on machines which they’re pretty sure are designed to kill them in this sci-fi satire from Mark Russell (The Flintstones, Second Coming) and Mike Deodato Jr. (The Amazing Spider-Man, The Resistance).

Not All Robots uses a widely feared concept of a not so distant future as a poignant reminder that despite obvious differences we are all very alike. This story begins with a communication failure between the robots and people in a future society. It’s a build of not only human emotions, but robot emotions as well and it describes what leads the two species to have such stark opinions of each other. However, by the end of the issue communication is not the only failure. A robot has failed its duties and now an entire city is dead. Was this a malfunction or is this the moment that humans and robots can no longer trust one another?

The best part of this story is the dialogue. This is not the first time we’ve seen stories where robots decide that humans are expendable. The reasons are generally all the same, humans are lazy and useless and only destroy the planet, etc. The difference between Not All Robots and those other stories following this trope is that Russell and Deodato take the reader one step deeper. The dialogue beautifully anthropomorphizes its protagonist robot, Razorball, as Razorball struggles to find his place in society with a job he hates and a family that doesn’t understand him.

The interior art of this book and its layout are very well done. There is a cool retro style and it gives Not All Robots a unique atmosphere to visit the story in. Although the art and the atmosphere of this book are great, there wasn’t a page or panel that made me go, “wow”, and I think because of this, I never got immersed into the book.

I like the cover. It gives you that retro sci-fi feel and is beautifully crafted.

Book One’s greatest strength is its dialogue. As a writer myself, I really appreciated the emotional content and story build without it feeling like an information dump.