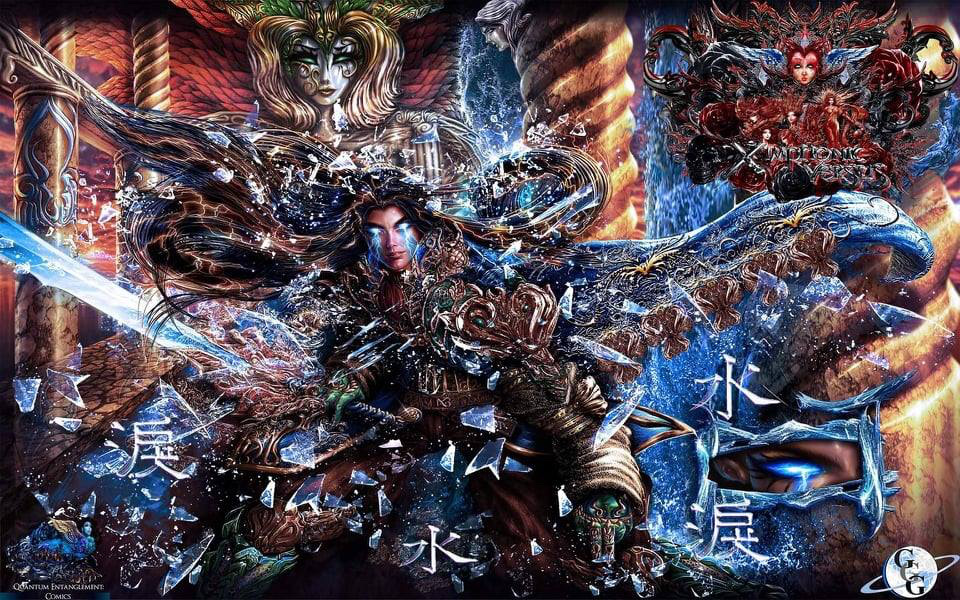 Xing, thank you so much for agreeing to an interview! Tell everyone about who you are and your background?

Thank you so much! I’m Xing Xin and I’m A creator, writer, and artist and also an executive producer on multiple worldwide TV shows coming from the Global Genesis Group. And the founder of Quantum Entanglement Publishing.

I’ve been drawing and telling stories for as long as I can remember, and I spent almost 30 years writing and creating these stories and worlds. Growing up in the 80’s watching Anime, I always loved fantasy, myth, and history. And I love the works of Shakespeare, Homer, Professor Tolkien, George R.R Martin, Joseph Campbell, George Lucas, Tetsuya Nomura and so many more. I learned art from Chinese, Korean, and European art masters.

Tell us about Ximphonic Versus: Symphony of the Phantom Night! Where did the idea for these stories come from?

Ximphonic Versus story centers on Crowned Prince Addonnis Neos Latrunculus, Heir Apparent To The Divine Throne Of the Noctium Imperium. He must embark on a treacherous journey, through A world of endless enemies and challenges. Darkness seeks to drive him to the brink of madness, dragging him down into unending grief. Everything he once knew and believed, has been consumed by the depths of darkness itself. Forced to choose between “Two Evils’ ‘ and the women he Loves. He seeks to defeat Death itself and bring his beloved back from the dead. Coupled with Loss and tragedy that will lead to a future no one could have imagined. As Romanticized Darkness, is Influenced And Beautifully Interwoven as Shakespearean Lore. Setting the stage In this Dark, Beautiful, and mysteriously shocking tale. This epic series is told as a tale of Love, Tragedy, and Dark Ambition. From Opera and Mobsters to Magical Beings And Gothic Inspired Metropolises, Ximphonic Versus is breaking the mold on Fantasy convention.

Really described as a beautiful, dark and tragic Opera which has been 26 years in the making! The fable will touch on realistic tones but set in a very stunning Fantasy backdrop. The characters lead interesting lives, plagued by the everyday things we all know and understand. The complexity of the story comes from their relationships and personal lives. It also takes a look at how they deal with situations of love, heartbreak, forgiveness, and evil. Human emotions are set in a fantasy world. Apart from the story, the highlight of the series is the stunning art on every page and panel with action that transcends what is out today. Readers will also have access to Royal lineage charts, different languages, and much more.

You faced a lot of rejections trying to bring this project to life, tell us how you pushed through that?

Ximphonic Versus was rejected 157 times by every publisher minus Marvel & DC. And it was very challenging, but it’s hard to create something brand new and have people believe in it. However you have to push through it and fight for your vision, stay focused, and be willing to take the hits because they will come. Never give up, Never stop trying.

Ximphonic Versus is getting turned into an anime! Tell us about that project and how it came to life!

After all the rejections, I didn’t know how I would get my work out at the time. And then one of the VP’s from the Hollywood production company Global Genesis Group saw my work. They asked me to call them on Monday, so I did. I’m on the phone and they say “ok you have 30’s, pitch us your series” I start and 30’s later they say how much they liked it. And they gave me a TV deal, made me an executive producer and writer with Hollywood credits. And they have acquired two more of my series for worldwide release as well. I can’t wait for the trailer to be released, with music from world-renowned musical composers TWO STEPS FROM HELL.

How have you been able to sell so many copies without a KS or other crowdfunder? Give us some insight into your success.

That was not easy and still takes much effort, every day you have to engage and interact with readers, get them to believe in your vision, and share that experience with them. It’s also important to give readers quality, not just story or art but in everything. And I’ve been so fortunate to have so many amazing supporters from around the world. And the graphic novels are selling out faster than I can have them printed. And just last month I started working with Liberty Entertainment Distribution ( http://ledg.us/ ) And they will be getting Ximphonic Versus into even more comic shops nationwide. XV is a graphics novel series, and Vol.1 & Vol.2 are available now, Vol’s 3-6 are in production now, Vol.3 will be out very soon.

What advice would you give a creator trying to sell copies of their comics or graphic novel?

Be bold, be daring, and don’t fear failure, you have to always rise up and keep going. Yet don’t just rely on crowdfunding for social media, really think outside the box and don’t settle for mediocrity. Really hone your craft, keep your focus on your work and stay humble.

It can be nerve-wracking for sure, but you have to start on your work. Every day even if it’s writing down ideas, sketching or worldbuilding, you have to do something. Hesitating won’t help it become a reality, it takes hard work, many years of hard work. If you stay focused on track you will see your vision come to life.

Xing, how can people find you and support this project?

These are the links to my works online, thanks so much for the interview!