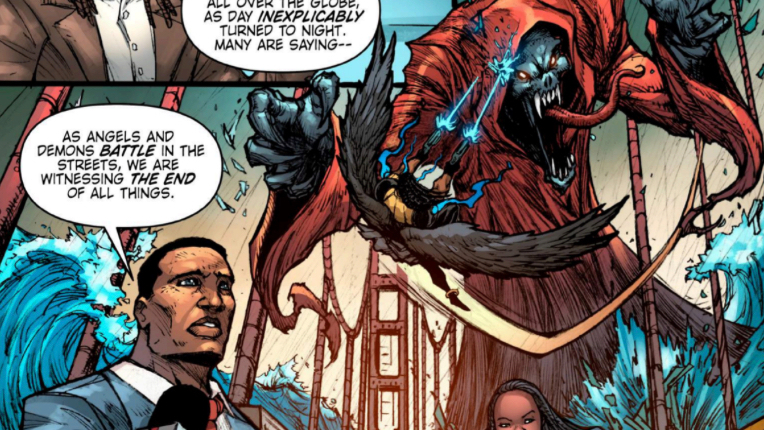 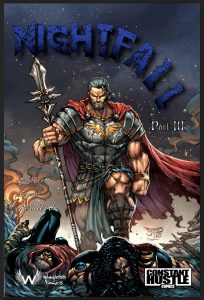 Book Description: We begin Nightfall #3 with Avery sitting on Lux’s couch, waiting for her to come home. When Lux arrives Avery asks her what is happening. To Avery’s chagrin, Lux doesn’t know what Avery is referring to. Before they can dive deeper into that discussion a creature appears and attacks them.

We then go to the Golden Gate Bridge, where a huge demon is creating chaos and making it impassable. Justice and Kaliburn are on the scene trying to stop it. Before Justice can really get involved with the demon he has a reunion with someone he made an enemy of.

Exile, formerly known as Baelor before Justice took his wings, has a bone to pick. Exile is so powerful that Justice and Kaliburn are overmatched. This leaves the responsibility of handling the Demon to Her.

Her is able to defeat the demon. It comes at the cost of draining her powers temporarily. With Her and Kaliburn down for a spell there’s nothing that can be done about Exile taking Justice to Merlin.

We then return to Lux’s home to see Avery being overpowered by the creature that appeared. It captures Lux and vanishes through a portal with her.

The issue comes to an exciting end with Merlin holding Justice and Lux captive while preparing the next step in his sinister plot.

To me Nightfall has become like Stranger Things. I absolutely love it; but I have to savor it because I know it’s going to be a while before I get more. After the first two issues I have learned that rushing through the story means starting the wait for the next installment that much sooner.

Forcing myself to slow down allowed me to truly appreciate how great this issue was. The confrontation between Avery and Lux, the demon on the Golden Gate Bridge, Baelor/Exile putting a beat down on Justice AND Kaliburn, Her, Billy, and all things Merlin. If you blink you’ll miss something!

Even if you blink, you can’t miss how extraordinary Mr. Simao’s artwork is. The attention to detail is magnificent. Crisp lines everywhere. This series continues to be a clinic on how comic book art should be drawn.

The artwork itself is in rare air. The way Nestor Redulla colors it puts it in another stratosphere. The coloring, coupled with terrific shading techniques makes this work announce its presence with authority.

As a geek on a budget I’m telling anyone that will listen that Nightfall is a must read series! It has intrigue. It has action. It brings in characters from different indie comic universes. We even get a guest appearance from someone we’ve known for decades!

You can get your copy of Nightfall #3, along with some other geeky goodness that has already been unlocked in stretch goals, in the Kickstarter Campaign that is currently running. You can find this great bundle at: