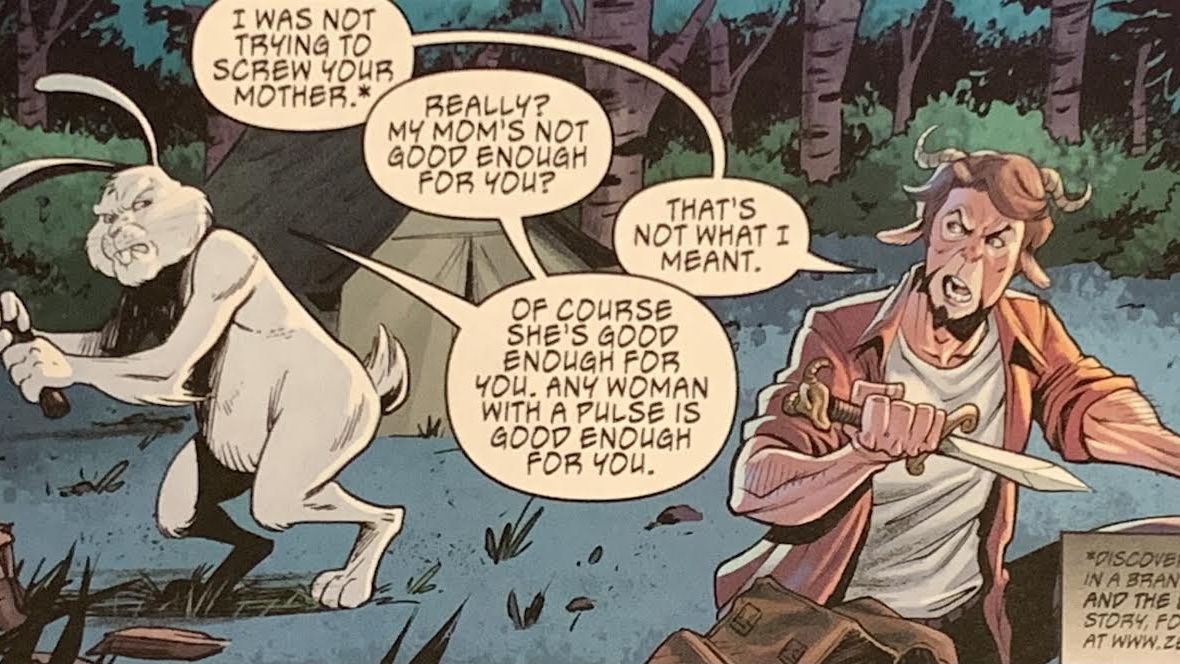 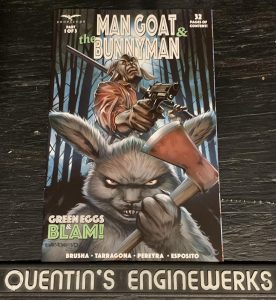 Book Description: In “Man Goat & the Bunnyman: Green Eggs and Blam!” #1, our story begins years ago in another dimension. We see Floyd’s father making a mad dash to avoid being captured by creatures that look like what you would get if you did a mashup of Venom and a werewolf. He’s cutting between trees and darting left and right to evade these creatures. This is even more impressive when you realize he’s carrying a small child. Floyd’s father narrowly escapes these creatures by jumping through a portal that brings himself and the child to our dimension. It’s out of the fire and into the frying pan for our rabbit warrior. A scientist with a team of heavily armed soldiers is waiting for them on the other side of the portal. The scientist emphasizes that he needs them alive. We then cut to today. Floyd (Bunnyman) is having an argument with Phil (Man Goat). Apparently something happened involving Floyd’s mother and Phil’s libido. It wouldn’t be the first time Phil’s urges led to a poor choice. Floyd is so steamed he doesn’t even notice the demon attacking him. Phil comes to Floyd’s rescue. In the ensuing battle between Phil and the demon, Phil’s shirt is disintegrated. Oblivious to the fight with the demon Floyd sees a shirtless Phil and accuses him of trying to look good for when their handler, Tammy, arrives on the scene. Tammy takes the guys back to their secret cabin. Our heroes are still bickering to no end. Floyd reaches the point where he’s had enough and takes off for a bit to clear his head… and finds himself at the beginning of another adventure.

The sophomore series with our heroes doesn’t miss a beat. Phil is still the guy that the ladies swoon for while Floyd is a fluffy ball of hormones, jealousy, and rage. Floyd’s tendency to overreact and not listen to reason rears its ugly head again in this issue. To be fair, it wasn’t a good look for Phil and Floyd’s girlfriend.

When we first see Floyd and Phil in this issue there’s an editor’s note saying that we can catch up on what transpired between Phil and Floyd’s mother on Zenescope’s website. When I went to the website, I was unable to find the link for that story. I found that to be disappointing.

The way Phil’s narrative is colored made it difficult to read. It doesn’t affect the story. It does bring about some mild frustration as it breaks up the rhythm for reading.

One thing I have always appreciated about Zenescope is the quality of artwork on their covers. No matter what the title, they pull out all the stops. This cover is no exception. Phil and Floyd are depicted in a manner that puts them somewhere on the line between frightening and badass.

The artwork on the interior pages is just as crisp and clear as it was in the original series. The work on facial expressions is what seals the deal. It truly makes the characters come to life. I appreciated seeing the guest stars at the tea party.

As a geek on a budget I’m of the opinion that “Man Goat & the Bunnyman: Green Eggs and Blam!” is well worth the price of admission. You get action, great artwork, and some hilarious dialogue.