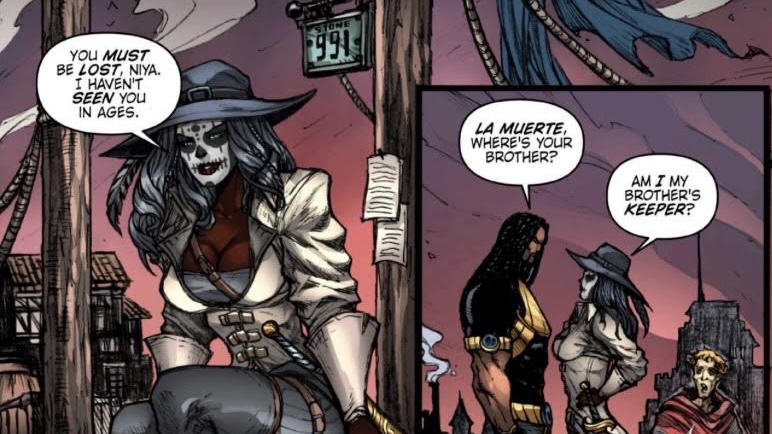 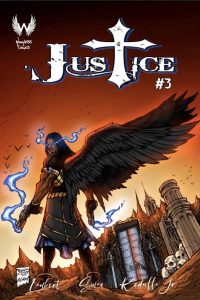 Book Description: In the “zero issue” we learned that Justice is the Left Hand of God. He was the one to bar the gates of Heaven when the fallen were cast out. He guarded the lamb’s blood during Passover. Now the voice of God is missing. To right this wrong Justice descended from Heaven to come to Earth. It has been anything but a warm welcome. Justice has had to face a demon named Morning Star, Hell Hounds, and a trigger happy police officer. And that was just the first issue! In the second installment of “Justice” we saw our hero have a meeting with Iscariot. We know him better as Judas. The meeting does not go well. Justice finds himself in need of rescuing… and time to collect his thoughts. In “Justice” #3 our hero is literally going through Hell to save Heaven. He needs to meet with Tarturus. Along the way we get to see a new character, La Muerte, who is the ancient broker of souls. Justice learns this circle of Hell is under new management and he realizes how he can end the threat to Heaven. Will he be too late?

I find it mind boggling that in three short years Justice is already making his tenth appearance in a comic book. That is a very impressive milestone for a small press character to achieve! From my observations that number tends to be a lot closer to five. Usually this happens because the stories have played themselves out. Mr. Lambert is like the Energizer Bunny with Justice. He just keeps going and going.

One of the things that impresses me the most is the character relationships. Whether they realize it or not, the characters are connected in an intricate spider web. It’s like “Better Call Saul”, only without the drugs and money. Everyone has a role to play.

I am very fond of this cover. Justice standing at the gates of Hell with his guns smoking conveys a power that talks to the reader. It says Justice is a force to be reckoned with. My youngest describes this cover as “a little scary. I’m glad he’s one of the good guys”. The little one is not wrong.

Having the right artistic team paired up with a writer is vital to the entertainment value of a comic book. Simao and Redulla’s work with Lambert is comparable to Jason Shawn Alexander with Rodney Barnes or the late Herb Trimpe when he worked with Larry Hama or Bob Budiansky. It makes the story come to life.

Their work on the last few pages with Jareth is stunning. It’s a very close second to the panel of the demon on the bridge they did for “Nightfall”. The line work is comparable to McFarlane.

As a geek on a budget I would be remiss if I didn’t tell you to get in on “Justice” #3. You’re getting phenomenal writing, terrific artwork, action, and something of a love triangle to boot.

You can get your copy of “Justice” #3 during its Kickstarter campaign at: