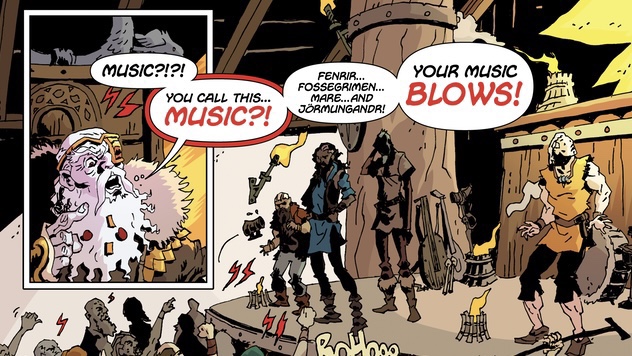 Bad Bug Media are introducing a balls to the wall, take-no-prisoners, heavy metal party where a band of immortal Asgardians are banished to the lowly plane of Midguard (Earth, to you humans).

Created and co-written by Bad Bug Media founder Mike Tener (Midnight Highway, Vanya) and letterer Dave Lentz, Issue 1 of Ragnarawk introduces the reader to a world that can only be described as if TV’s Metalocalypse and Vikings met in a bar and had a sexy debaucherous party. There’s plenty of easter eggs which will appeal to the heaviest of metal fans and the hardest of rockers. Ragnarawk is a meeting of two highly celebrated fandoms which takes the statement “I didn’t know I needed this but now I can’t do without it” to a whole new playing field.

Thanks to the illustration of Jok, not only is this a supernatural battle of the bands story involving characters of Myth and Legend, it’s also a great conversation starter while you’re waiting in the pit at a festival. Or exchanging barbs between drinks while the support band is playing.

Launching on the 31st of May, the Ragnarawk kickstarter campaign is going to include an almost limitless swag of variant covers and merch to choose from. Enough to please any worthy citizen of Asgard.