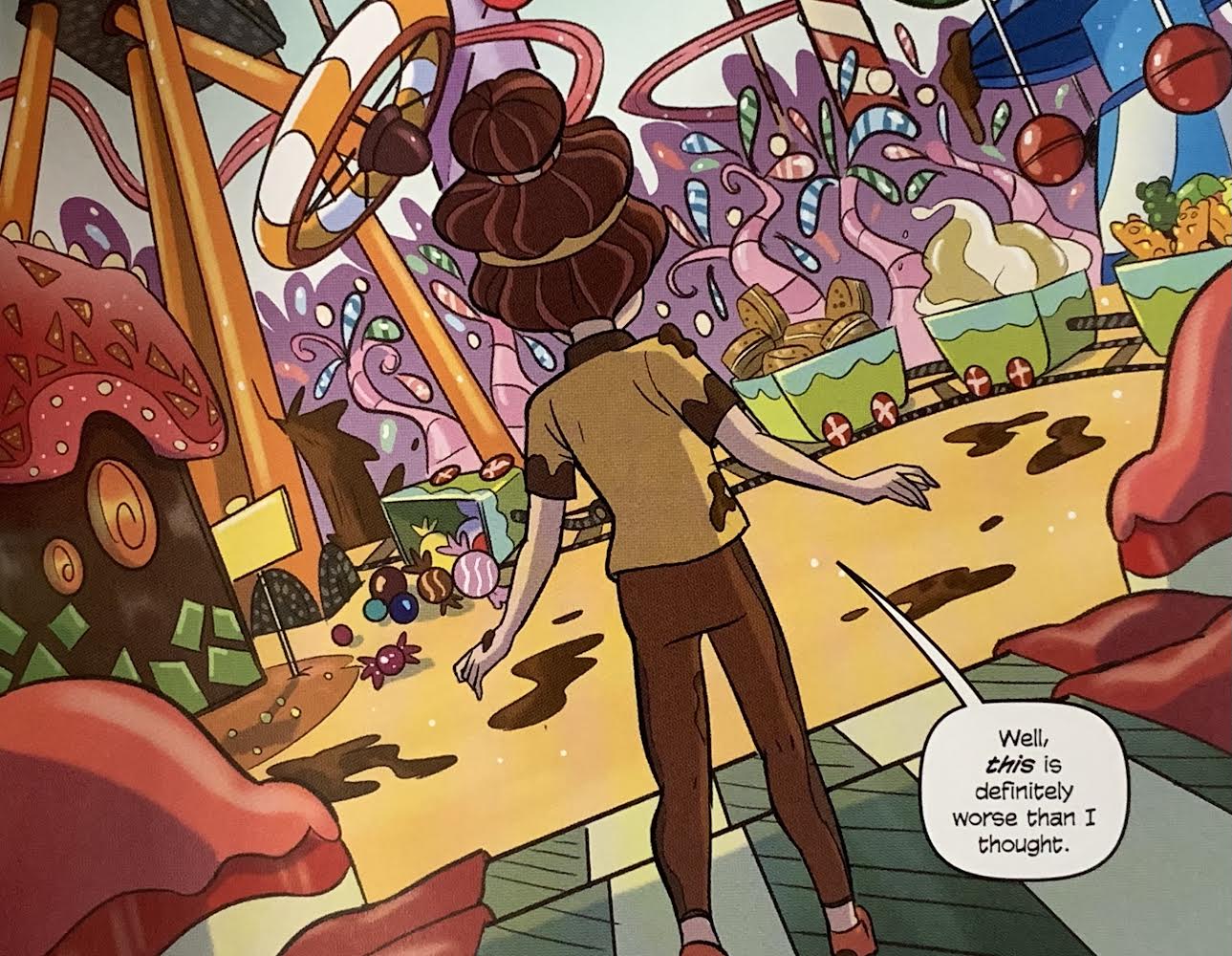 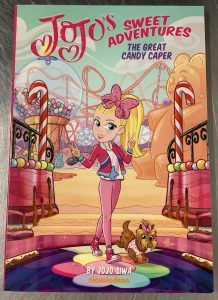 Book Description: A candy themed amusement park called SugarPalooza is having its grand opening. JoJo has been asked to be a headlining performer for opening night. In exchange, she and two guests can be like a kid in a candy store on their own private tour of the park. JoJo agrees faster than you can say, “High top shoes”. She decides to bring her friends Grace and Kyra on the tour. The girls are shown the inner workings of SugarPalooza by their tour guide, Maddie. SugarPalooza is different from other theme parks. It has hydroelectric power from the chocolate and caramel that flows through the factory. It’s a well oiled machine until Maddie slips and inadvertently hits a button that sends things into overdrive. Oblivious to activating the button, Maddie continues the tour. The girls run into the daughter of SugarPalooza’s owner, Avery, and her friend Jada. They are huge JoJo Siwa fans and would love to join the tour of the park. JoJo is always happy to do something nice for a fan so she welcomes the two girls to join the group. Unbeknownst to JoJo, Avery and Grace have a history. The issue is Grace doesn’t say anything to JoJo about it right away. Instead she chooses to hold the drama. As the tour continues, rides and machines at the park start breaking down and Grace decides to remove herself from the situation. Can JoJo and company get everything under control before they’re washed away in a tsunami of chocolate?

We all know about JoJo Siwa as a singer, dancer, and actress. Did you know she is also an author? I went with our two boys to see JoJo‘s concert a week earlier when I discovered this book while running errands with my wife.

I was all over this book. First of all, it’s a great change of pace from my usual fare. Secondly, I score points with the kids by passing it on to them when I am finished with it.

The book is akin to a graphic novel. It has four chapters. Each chapter is about the length of most comics on the market.

The story simultaneously gives us multiple morals. It tells the reader that it’s okay to make mistakes, as long as we own it and learn from what happened. It also teaches the value of speaking up for yourself and doing the right thing.

The artwork on the cover is perfect for its target audience. It wouldn’t be a book about JoJo without her and BowBow on the cover. I liked how the cover artwork is actually relevant to the story.

In places the artwork on the interior pages is a little bit cartoonish. Given that this is a children’s book that’s to be expected. I didn’t expect the coloring to be so vibrant. The attention to detail on the shading is noteworthy.

As a geek on a budget I’m all in on JoJo’s Sweet Adventures: The Great Candy Caper. You’re getting the equivalent of four issues for less than $13. It has a positive message for kids in a world where that seems to be more of a challenge to find in children’s entertainment.