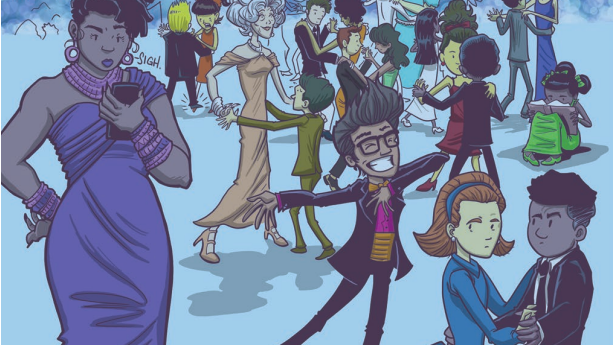 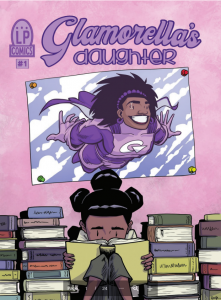 My favorite thing about Glamorella’s Daughter is the interior art. I think Jerry Bennet has done an excellent job of creating expressive and recognizable characters and using a vibrant, eye-catching color palette. Bennet does a great job with small details like shading, skin wrinkles, hair, and other minute stuff that tends to just get forgotten when artists are going for a cartoony kid-focused style. I think one of the best examples of Bennet’s attention to detail is a moment when Glamorella is looking at her phone while attending a dance at Comet’s school. There are tons of characters, all with unique hairstyles and outfits. The scene is also foreshortened well, colored well, and even has Glamorella and Comet standing on opposite sides of the panel to demonstrate how far they are from understanding one another.

I like the concepts and ideas presented in Glamorrela’s daughter. Glamorella is a world-famous superhero who lives a lavish lifestyle and loves the spotlight. Glamorella’s autistic daughter Comet finds all of the traveling to big events exhausting and would rather dig into a good book. I can relate to both Glamorella and Comet as I was once the kid in my family who would rather stay home and read comics than go see monster trucks. Now I’m a parent who has to juggle a full-time job and working as a writer with trying to understand the unique emotions and circumstances that my kids face growing up today. I have a lot of respect for the fact that the creative team behind this book would even tackle this subject which makes the last part of this review pretty hard to write.

My biggest gripe with this book by far is the writing. I come from a school of thought that states that a story is about a character taking an action to achieve a goal. Using that criteria, I think this first issue of Glamorella’s Daughter is an example of a book that has a plot but doesn’t have a story.

Scriptwriter Charles J. Martin introduces many elements in this issue that are sources of conflict between the characters but doesn’t really link them to a larger narrtive. It’s clear that Glamorella and Comet love each other but have a hard time understanding one another. There’s also drama in the fact that Glamorella comes from another world that may hold creatures with hostile intentions toward earth. What’s missing to me is that neither Glamorella nor Comet seem to have a goal that would force them to confront these issues.  This first issue feels like it’s all just a lead-up to the actual inciting event, which will happen in issue two.

Glamorella’s Daughter is a good-looking book with many interesting ideas, but the lack of any significant goal or force of antagonism holds it back in my eyes. I wouldn’t say this book is terrible or that the creative team shouldn’t be proud, but I definitely can’t rate it any higher than three out of five. If you’ve read Glamorella’s Daughter or have another book you’ve read that you would like the ICD team to look at, please leave a comment down below and keep following Indie Comix Dispatch for even more indie comics reviews. 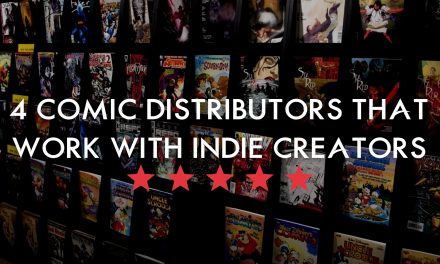 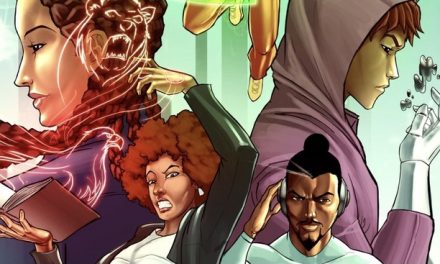 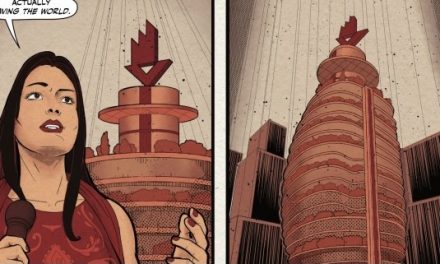