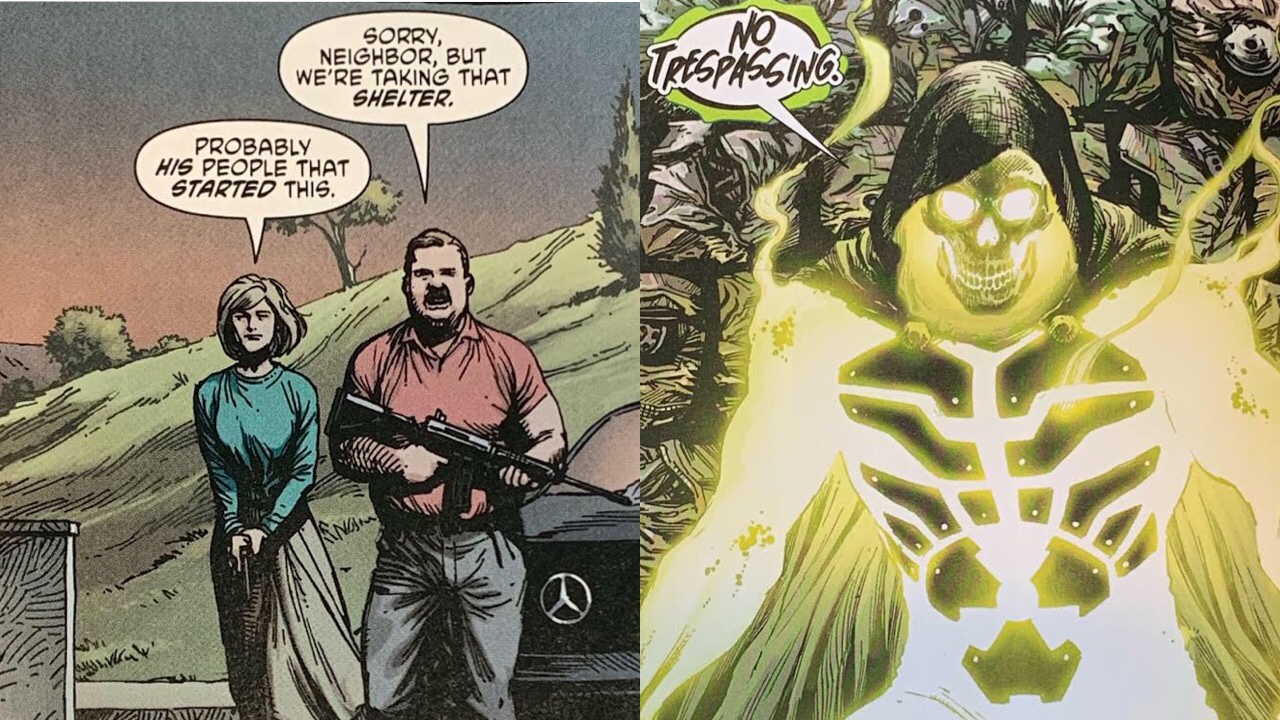 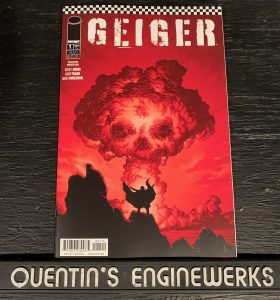 Book Description: This is the tale, nay legend, of Tariq Geiger. In July of 2030 a nuclear holocaust begins in Boulder City, Nevada. In defending his family from looters Tariq is trapped outside the bunker that his family has prepared. He and the looters receive the full intensity of the blast. Twenty years later the story picks up with some scavengers in hazmat suits scouring what’s left of Boulder City on orders from the king. They encounter a man without a suit dubbed “the Glowing Man”. He proceeds to beat the tar out of the scavengers while explaining that they are not welcome. Later we see that this “Glowing Man” is Geiger. To this day he’s defending the door to his family’s bunker, thus ensuring their safety. The issue wraps up as we get a glimpse of the king that was mentioned earlier, as well as an overview of all the kingdoms in the land.

With Geiger #1 I was a bit late to the party. I had heard about it before but the shelves were always empty at my local comic book store when I went after it. Only with the fourth printing did I finally get my hands on a copy. It was worth the wait.

Post apocalyptic books have always been an interesting genre to me. In a manner of speaking they have been huge for quite some time. We just didn’t see them as post-apocalyptic in nature. Robinson Crusoe was published in 1719. It was a tale of man vs. nature and 300 years later it is considered a classic.

Over the years there have been a great number of other post-apocalyptic stories. The challenge is making sure the title can differentiate itself from the pack. As a creative team if you can do that while keeping the story sustainable AND believable you have a hit on your hands.

Geiger #1 checks most of those boxes. How Tariq survived the nuclear blast is a bit of a “because comics” at this time. I’m hoping we get an answer to that question in the next or two. Aside from that it’s well written and believable. Tariq is trying to do right by his family, even if it means having to do things he’s ashamed of. From my vantage point that makes him a good man.

The cover artwork for this book is very intense. You’ve heard the expression less is more? Usually I disagree. More is more. Not here. A mushroom cloud in the shape of the skull in the background and the silhouette of someone in the foreground, especially with the tones of red used for color. It’s a power that commands your attention. Well done.

The interior artwork was solid as well. “Glowing Man” reminded me of Scareglow from Masters of the Universe. Until I read this issue I never thought I would see something along those lines in a comic book without the art looking like it came from a Saturday morning cartoon. That was quite a feat. My personal favorite panel is the one that immortalizes the individuals that thought it was okay to brandish their weapons because a peaceful protest march “got too close to their lawn”.

As a geek on a budget I found Geiger #1 to be well worth the price of admission. It’s a solid read, with terrific character development. I am very eager to see what the next installment in the series has in store for us!