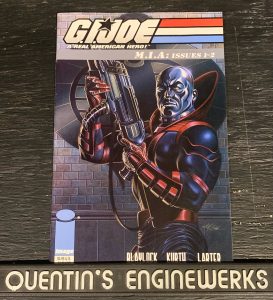 Book Description: After a nine-year hiatus, the G.I. Joe team is reassembled because Cobra has become a credible threat once again.

From June of 1982 until December of 1994 G.I. Joe: A Real American Hero and a 155 book run with Marvel. As a child of the 80’s this title and Transformers were my go to titles. You could keep your X-Men. Fantastic Four wasn’t my jam. I wanted to see the next mission the Joe team was on!

In 2001 Image did a reboot, putting out G.I. Joe. In the reboot the story picks up ten years later. Cobra hasn’t been very overt; but they are still in the game. The Dreadnoks are flourishing. They now have a chapter in every state in the nation. Zartan’s daughter, Zanya, is running the majority of the operations now.

The Joe team has been recalled for reinstatement, pending a physical assessment. From the looks of things we won’t be seeing Bazooka again in this series. Alpine is also M.I.A. for unknown reasons. In the reunion we get an update on some relationships. Flint and Lady Jaye are now married. Snake Eyes left Scarlet three days before their own wedding.

The Cobra top brass is having a meeting at the Dreadnoks’ compound. Destro, Zartan, Cobra Commander, Dr. Mindbender, and the Crimson Twins are all present. Cobra leadership is like a family get together. There’s always drama.

It wouldn’t be a leadership meeting for Cobra without someone making a power play to seize control of the organization. This time it’s Destro making his move. How long will he hold them reins?

The Joe team is given a mission: execute an incursion into the Dreadnoks’ compound and capture the Cobra big wigs. A combination of rookie mistakes and rust on veterans leads to less than perfect results; but it gives us the foundation for a great run as we get to know some of the new faces in the crowd.

I enjoyed this story. Mr. Blaylock gives us a slightly different take writing about America’s daring, highly trained, special missions force. With Mr. Blaylock we get glimpses of life out of uniform for the Joes. We don’t see as much of that in Mr. Hama’s work.

This story line is considered canon. Hasbro said as much when IDW Publishing relaunched the G.I. Joe: A Real American Hero line. It blends quite well with few questions or plot holes.

The way characters are depicted in this series took some getting used to. It wasn’t a bad thing. In fact I prefer some of the characters in this run. Zartan is especially well done.

As a geek on a budget I especially loved that this one was a double prizer! This book has the first two issues of the run in it! Best of all, the cover price was lower than the original. Well played, Image!

Surprisingly, for being almost 20 years old this issue isn’t very expensive in the wild. I ended up stumbling across this one in a consignment store for about $2.00. I have paid more than that in sales tax on other back issues. This was well worth the price of admission!